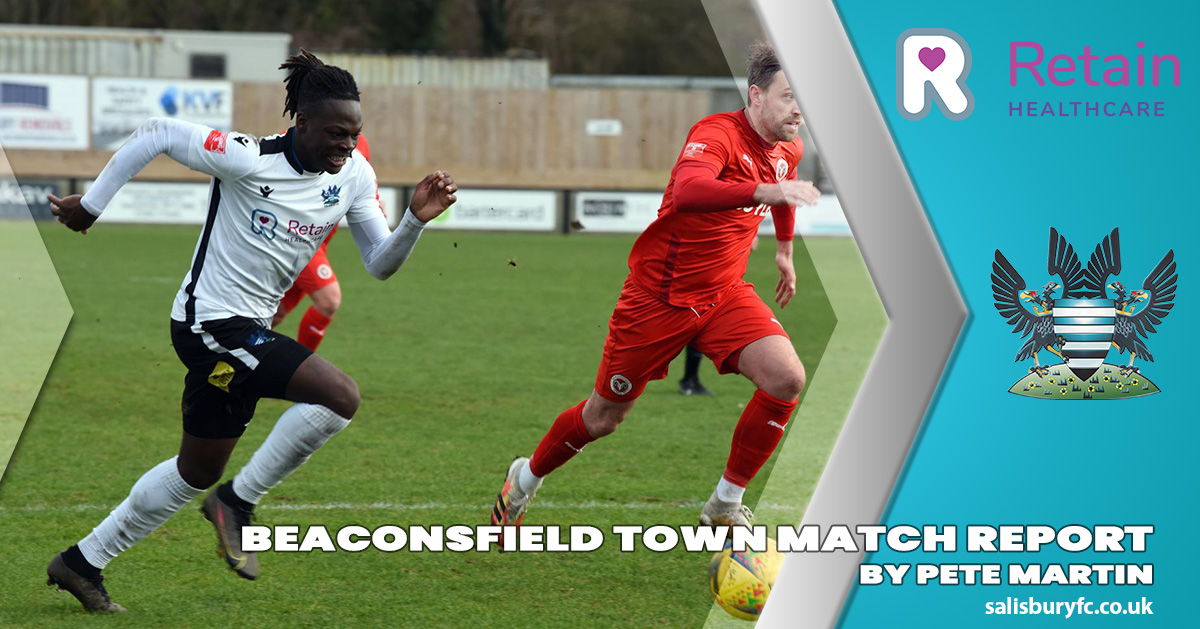 Salisbury’s poor run of results extended to 1 win in the last 12 league games as they were beaten at home by Beaconsfield Town. The Whites’ manager Steve Claridge handed a home debut to Joshua Fawole as he replaced Sam Ashton up front.

The away team started the brightest and should have taken the lead after just 7 minutes. The lively Daniel Bradshaw put in a dangerous ball from the right and Nathan Minhas will have been disappointed to put his effort over the bar when he was well placed. Beaconsfield had further half chances through Minhas and Oliver McCoy before Salisbury threatened for the first time after quarter of an hour. Following Antonio Diaz’s ball from the left, Ollie Knowles and Abdulai Baggie combined to set up Fawole but his shot was weak and dribbled wide.

The home side should have taken the lead after 24 minutes when Calvin Brooks hit the bar twice in the same move. First, his header from a corner rebounded into play and from Baggie’s ball back across he thundered a header against the bar from only 3 yards out. Beaconsfield responded and 4 minutes later Bradshaw headed over from McCoy’s driven cross from the left.

The end to end nature of the chances continued as on the half hour mark Fawole was just unable to get a touch on Baggie’s low ball in and shortly after Beaconsfield’s best chance of the half saw Scott Donnelly blaze the ball over from 6 yards after McCoy’s initial effort had been blocked by Charlie Kennedy. Despite plenty of chances, the game remained goalless as the teams went in for half time.

Into the second half and Beaconsfield again started the half strongest with Marcus Beauchamp having to be alert to tip over Luke Neville’s header from a deep free kick. 5 minutes after half time the away side took the lead through Minhas. A free kick came in from the left and with the home defence not dealing with it Minhas fired the ball past Beauchamp. The goal gave Beaconsfield a spring in their step and they had further half chances through Minhas and McCoy before doubling their lead just after the hour mark. Neat interplay in the box saw Bradshaw tuck it home via a slight deflection giving Beauchamp no chance.

Salisbury finally woke up after 67 minutes when Brooks saw a shot from distance saved and 4 minutes later substitute Devon Arnold slipped the ball through to Fawole whose 1st touch took the ball too close to keeper Ryan Hall who was able to put it behind for a corner. From the resulting corner, Brooks won the header and Arnold’s flicked attempt was well cleared off the line.

The Whites got a goal back on 78 minutes and it was through the persistence of Arnold. First, he closed the defence down well and then once he’d won the ball broke into the box and draw a foul for a clear penalty. He then confidently stepped up to smash it home and give Salisbury hope of salvaging something. The Whites pushed hard for an equaliser but the closest they came was a weak Diaz header at the back post and an Arnold shot that was blocked by a combination of the defence and keeper. Beaconsfield held on to record a deserved victory and condemn the Whites to another defeat.

Salisbury, next travel to Hendon on Saturday, Feb 26th and given they have a good record at the London club will look to bounce back and record a victory.