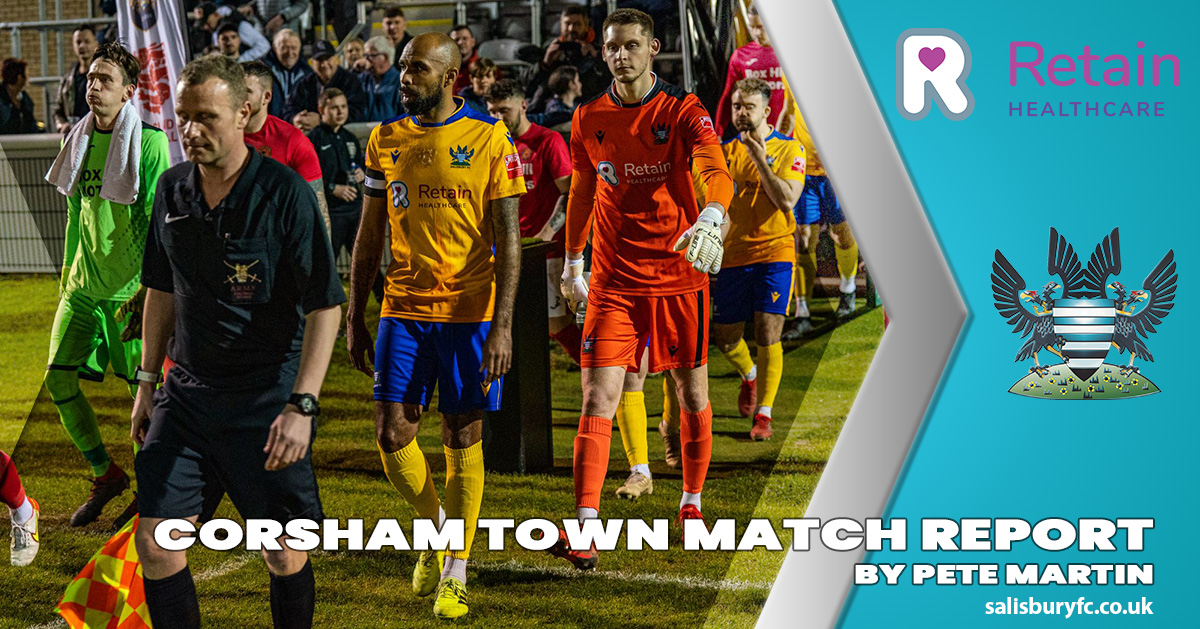 Salisbury were knocked out of the Wiltshire Premier Shield following a disappointing 3-1 defeat by Corsham Town. The game was played on the neutral ground at Melksham and saw White’s manager Steve Claridge name a strong team with a place in the final at stake.

The game’s first chance took 16 minutes to arrive and it saw Corsham take the lead through former Salisbury player, Brandon Mundy. A good move saw them progress down the left and after the ball came across it fell nicely for Nathan Davis on the edge of the box whose goalbound shot was diverted in by Mundy past a despairing Patrick O’Flaherty.

Salisbury were struggling to create much and the closest they came to an equaliser saw Dan Fitchett’s shot blocked behind after a corner. The Whites were unable to properly trouble Corsham keeper Rob Brown and it was O’Flaherty that was the busier keeper as he had to be alert to keep out both Aysa Corrick and Gary Higdon. 3 minutes before half time though, Corsham did double their lead through Chris Allen who slotted home nicely from the edge of the box after a break down their left.

The 2nd half saw Salisbury start much brighter and they pulled a goal back after 54 minutes through Devon Arnold. A good move down the left saw Antonio Diaz drive into the box and although his shot was initially blocked, Arnold was on hand to calmly finish and give the Whites hope of turning the game around. They continued to see plenty of the ball and 10 minutes later thought they had the equaliser only to be denied by the offside flag when Fitchett applied the finishing touch to what was at that point their best move of the match.

With 18 minutes left Corsham pretty much sealed the game as Higdon swept the ball home from 6 yards when Corrick squared the ball to him following a swift break down the right. Salisbury continued to press to get back into the game but despite efforts from Arnold, Diaz and Josh Wakefield they were unable to pull a goal back and the final whistle went to send Corsham through to the final.

The Whites are back in league action on Saturday when title-chasing Farnborough Town are the visitors to the Ray Mac stadium.