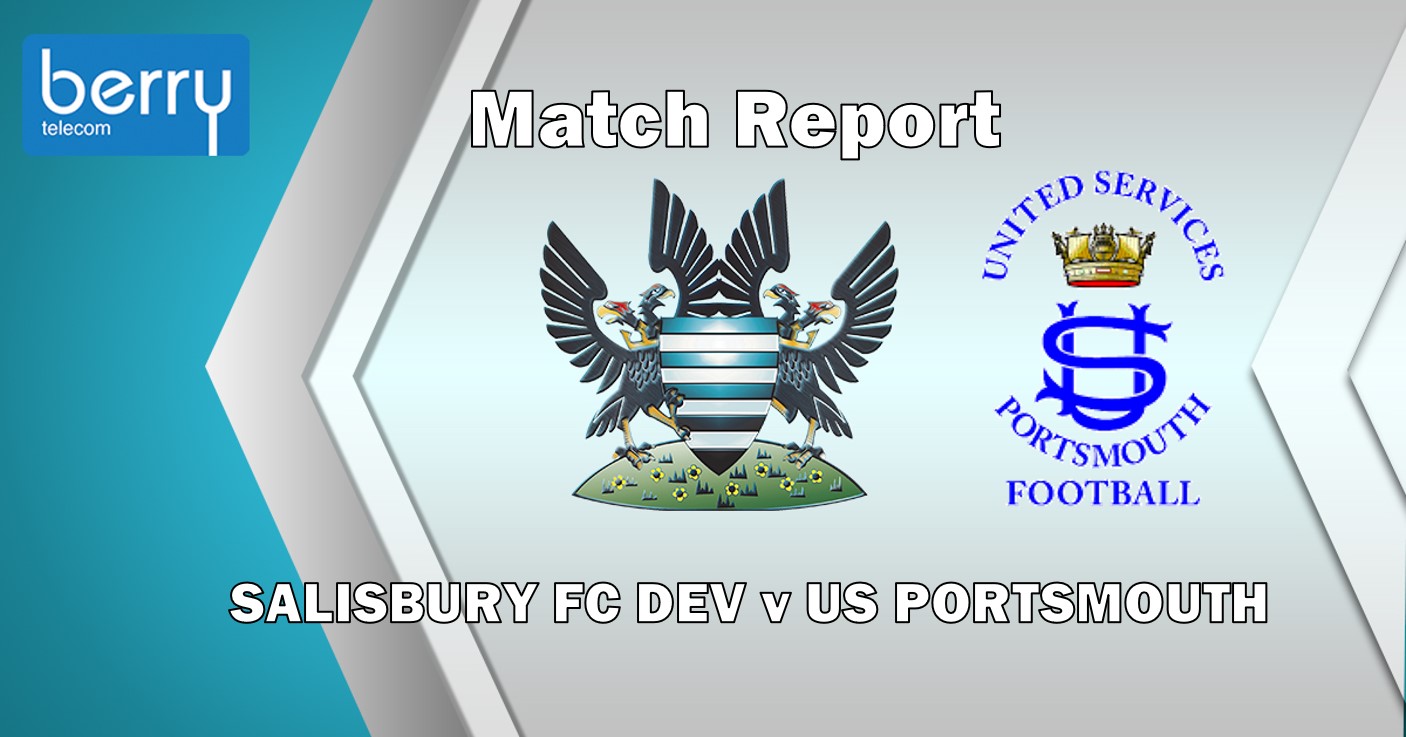 This fixture was moved to initially moved to Bulford 3G due to pitch re-seeding at the Ray Mac. However, that was not the last change. Lost keys for Bulford meant a last minute change and a 4 mile drive for all to Tidworth to get this game on.

Both sides can be forgiven for being a bit sleepy in the beginning with a rushed warm up to ensure the game kicked off at 3pm. However, kick off it did.

A vastly more experienced (and older) Portsmouth side to an extent started a lot slower than their youthful opponents in black and white. Just 2 minutes in if the opposition didn’t realise it already they now new they were up against some serious pace today when Sam Butt won the ball back when closing down on the left flank. Seconds later he is bursting into the box and staring down on the keeper but his shot came to nothing.

The Whites started well but got a warning when on 5 minutes the visitors forced their way forward and got within 20 yards of the home goal before letting go with a fierce shot that was saved by 16 year old stopper Duff. A early confidence builder for him. Just a minute later it was that man Butt again breaking down the left flank before delivering an inviting cross into the area, No 9 Ed Timperley got his head on it but a deflection sent it out for a corner which came to nothing.

Less than a minute later it was Nathaniel David’s turn to frighten the life out of the US Portsmouth side with his pace down the left, again a chance squandered. That’s how it continued with Salisbury breaking without reward and the visitors having the odd opportunity without really troubling the keeper. That all changed in the 15th minute when high another speed whites move ended with firstly Sam Butt having a chance to shoot, but he missed the moment and settled for setting the ball up for Ruben Smith, his effort was deflected wide but the quick thinking Timperley somehow from wide right found the back of the net to make it 1 v 0.

Butt and Timperley combined again on 30 min when Butt puts the no 9 through 1 on 1. His decent attempt beat the keeper, but unfortunately the post as well. 2 minutes later the bench thought Timperley had got a 2nd when a Alfie Hawke corner was met by the striker cleanly at the far post, but it was only the side netting that rippled on this occasion.

On 41 minutes a Portsmouth attack down their right wing ended with a penalty for a handball judgement that would have been right at home on Match of the day later that night. Feest with his arms tight by his side was adjudged to have handled. Despite complaints and demonstrations of where his arms where the penalty stood, and was duly despatched. 1 v 1 at half time.

On just 47 minutes the young Whites where punished for the same mistake made too many times so far this season, when trying to pass the ball out from the back through the eye of the proverbial needle. It was intercepted and resulted in a goal to put the visitors ahead. This sucker punch was against the run of play for most of it. But gifts barely outside your penalty area will get punished at any level.

During the 2nd half it was mostly Salisbury that were troubling the opposition rather than the other way around. I guess with the experience in the visitors line up also comes age. The significantly younger whites were certainly the fitter and it showed. It took though to 60 minutes and another excellent delivery from Hawke from a corner to see Kelvin Lichowe meet it at the far post with a excellent header to make the tie even. Skipper Hawke was only taking the set pieces in the absence of usual culprit Waterson. Alf declared he is the new man on those set pieces now. Difficult to argue with him after his deliveries today.

Around 70 minutes it was becoming clear with their high tempo football a few changes of legs where needed in the attacking thirds for Salisbury to maximise the increasing tiredness in the opposition. Winter on for Timperley, Cooper for Jones in midfield and Boulton on at right wing allowed Lichowe the ex Yeovil full back to drop back and help ensure the defence to see out this game had some high speed cover.

A ball forward through the thirds from Hawke to Ryan Winter was cutely flicked around the corner for the forward running winger Harry Boulton, unfortunately the winger met the ball on the way down and it took a few seconds to get the ball under his spell. This allowed the defender valuable time to catch up, or surely the Salisbury man would have been through one on one. His eventual effort came to nothing.

In what turned out to be the final chance for the Whites, a Nathaniel David run which saw the left back drive in and out of 4-5 opposition players like he was running around cones in a training drill, the cross was blocked more than once before it came out to Winter 12 yards out. With the keeper still recovering his first time placed shot into the corner of the net demanded a great recovery save to keep it level, the keeper duly obliged. On reflection later that evening and 100 times practicing of that chance in the garden, he accepted he should have just put his foot through it…next time perhaps.

The game ended 2 v 2. Given the US Portsmouth side were 13 points clear at the top of the East division when last season was halted due to Covid, and this term have already seen off Laverstock 5 v 2, whom the whites had fallen too 1 v 0 just two weeks prior, this performance was a much improved one, and should help give the players confidence against older and vastly more experienced opposition.

That said the visitors did on a good few occasions trouble their hosts. However from the bench I am more focused on what our side are doing and seldom remember the good the opposition does, and that is being 100% honest and not biased SFC all the way. That said, their manager later said he was happy to get out of the game with a draw. that is testament to how well this young side did. When I say young the two midfields was a fine example of the experience difference. The combined age of skipper Hawke and Jones for Salisbury was 33.
The man wearing the arm band for the visitors certainly wont mind me saying he had a good few years on their combined ages.

Next up is cup action for the Dev squad when Newport IOW visit. The game was to be played at the Ray Mac this Saturday, but with the 1st team now at home this game will be moved to Bulford or Tidworth.