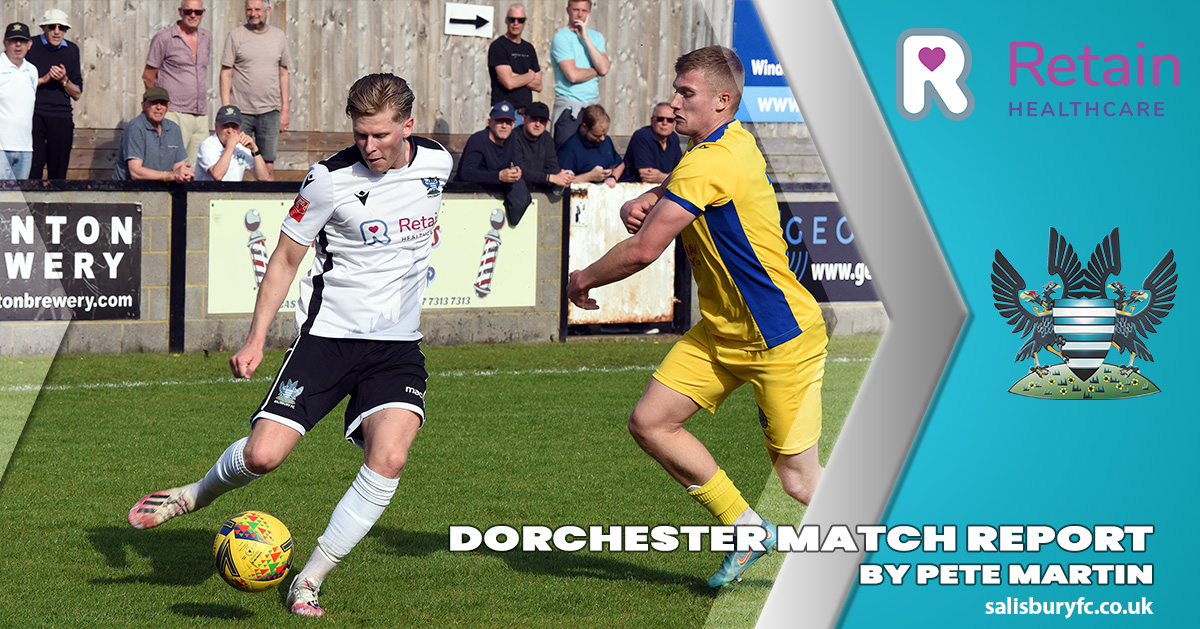 Salisbury’s penultimate home game of the season ended in defeat as they lost 1-0 to Dorchester Town in a game which ensured their visitors will definitely still be playing in the Southern League Premier next season.

A cagey start saw the Whites create the first goalscoring opportunity on 8 mins when clever play from Abdulai Baggie saw him feed the ball inside the full back and into the path of Antonio Diaz whose shot was blocked behind by Dorchester keeper Jack Bycroft. With both teams struggling to control the game and seeming to lack in creative quality, there was not much more in the way of goal scoring chances throughout the 1st half.

For Salisbury, Devon Arnold looked the most likely to make something happen and he will have been disappointed to put a shot high and wide when he burst into the box and at the other end Dorchester were unable to test Marcus Beauchamp despite having 3 or 4 shots from distance with only a weak Ashley Wells shot actually being on target. A first half lacking in real quality was bought to a halt by referee Samuel Read with a scoreless draw seeming a fair result so far.

That soon changed just 3 minutes after half time when Dorchester were able to get what proved to be the only goal of the game. In what may have been the best move of the match, Alfie Stanley and Harry McGrath linked up well in the inside left position before Stanley found himself with plenty of space inside the area to fire past Beauchamp and into the back of the net giving his side the lead. Unfortunately, the goal didn’t really sting the game into life and despite the best efforts of either side, there was very little to shout about in the way of goal chances.

The closest Salisbury came to an equaliser came on 60 minutes and saw Calvin Brooks’s cross deflected off a defender and straight into the grateful arms of Bycroft. Shortly after there was a lengthy stoppage as Brooks had to be stretchered off with what looked like a pretty bad knee injury, later confirmed to be a dislocation. A re-jig in formation from Salisbury was unable to provide the attacking improvement needed and it could have been 2 for Dorchester but McGrath managed to shoot well over when in yards of space about 8 yards out of the centre of goal. There was still time for 2 late Salisbury chances with substitute, Sam Ashton crashing a 20 yard curler against the bar after cutting in from the left and Baggie unable to properly test Bycroft following a long throw into the box.

The defeat means it’s just 1 win at home for Salisbury since November and they only have 1 more home game left to improve on that record. Before that The Whites have an Easter Monday trip to Gosport Borough, 3 pm kick off.