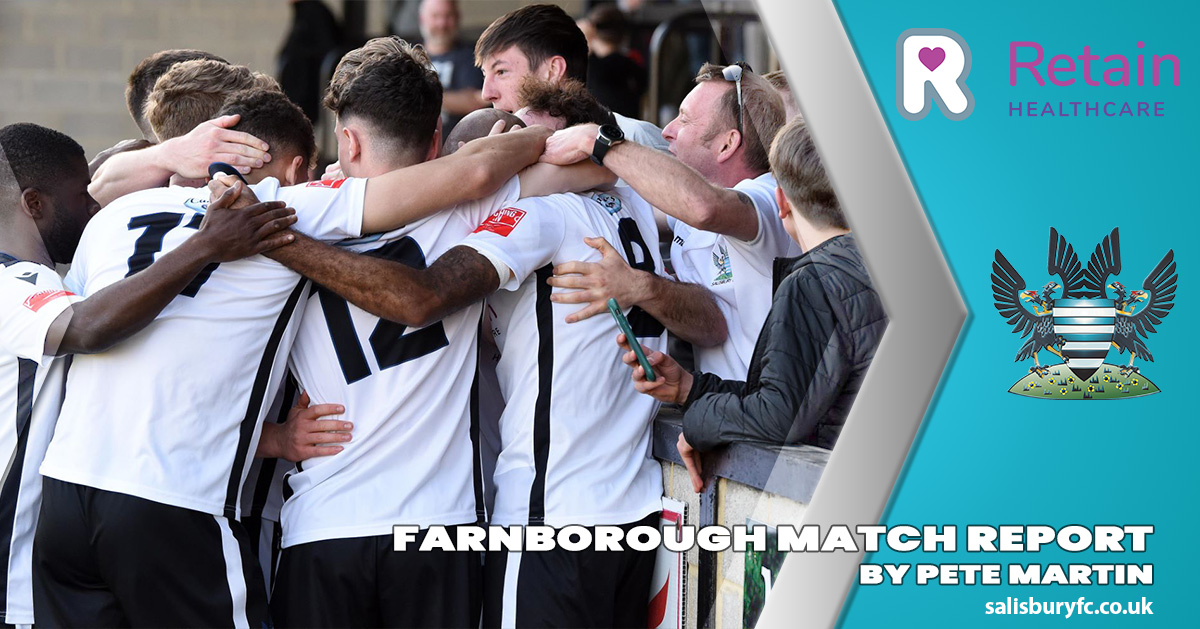 Salisbury got their first home league win since November with a fine victory at home to high flying Farnborough FC. The Whites team saw 3 changes from last Saturday’s defeat to Walton, including a 1st ever league start for young prospect, Layton Tulk.

The game got off to a blistering start and saw chances at both ends inside the first 5 minutes. Tulk’s 1st contribution saw him squeeze the ball through to Abdulai Baggie whose shot was comfortably saved which allowed Farnborough to counter and for them to get in behind but Mitchell Parker could only put a weak effort wide. 2 minutes later the same player found himself in behind again and this time he did work Pat O’Flaherty with the home keeper proving equal to the task. A third good opportunity for the visitors arrived after just 8 minutes and again saw Parker unable to beat O’Flaherty with the keeper doing well to push away a powerful shot from the edge of the area. Following a frantic opening 10 minutes the game settled down with scoring chances not as easy to come by, although home defender Sam Roberts might have thought he had given the Whites the lead after 17 minutes when the ball fell to him from a corner, only to see Farnborough keeper Jack Turner get a strong hand on it and turn the ball over the bar.

After 28 minutes the game changed as Farnborough were reduced to 10 men with Parker shown a straight red card following a late tackle on Charlie Kennedy on the edge of the Whites box. Just 3 minutes later the numbers could have been evened up as Farnborough were furious when Roberts was only shown a yellow card for hauling down the last man; the referee deciding that the player was going away from goal thus not being a clear goal-scoring opportunity. The rest of the half saw Salisbury attempt to keep the ball and show patience in attack with Tulk shooting wide being the closest either side came to breaking the deadlock before the break.

The start of the 2nd half saw a similar pattern to the end of the first with Dan Fitchett heading wide for the home side being the closest thing to a chance at either end. The game seemed to change around the hour mark with the introduction of Devon Arnold adding pace and liveliness to the Salisbury attack. The Whites almost took the lead after 68 minutes when Fitchett found Darren Mullings bursting through the middle of the defence but he was just about crowded out and unable to get a shot away in time. 5 minutes later though the same man did open the scoring for the Whites and it came after a sustained amount of pressure. After a good move down the left saw the ball reach Baggie, it seemed the chance had gone when his cutback was cleared only for him to regain the ball and feed Arnold. Some quick feet saw him able to get a powerful shot in which Turner did well to push up into the air but Mullings was on hand to capitalise and give his side the lead to the delight of the home crowd.

The 10 men of Farnborough attempted to mount a comeback, but despite half-chances for Buchanan and Mitch Brundle, they were unable to properly test O’Flaherty. At the other end the Whites kept on the front foot and looked to press their advantage but twice Baggie saw shots blocked by defenders inside the box and with further half-chances coming to nothing Salisbury were able to comfortably see the game out and seal a deserved and hard-fought victory against a side battling for the title.

The Whites are in action again on Tuesday evening when they head to bottom of the table Wimborne Town in an earlier than normal 7:30pm kick off.