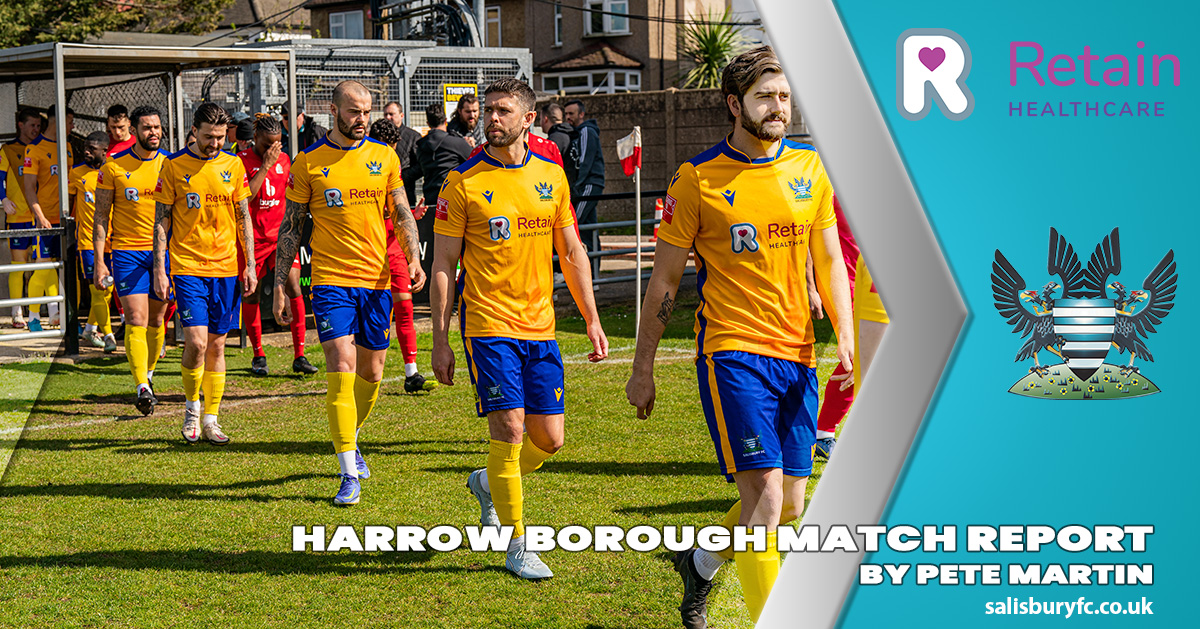 Salisbury’s 4th consecutive away game saw them bring home a point from Harrow Borough following a nil-nil draw with their mid-table rivals. There was one change to the side from the midweek defeat at Hayes and Yeading; Jordan Rose replacing Charlie Kennedy in the heart of the defence.

The Whites made a bright start to the game and earned a corner in the 1st minute of the game. This was whipped into the danger zone by Antonio Diaz and appeared to be heading into the back of the net until George Moore headed it off the line to deny Salisbury the perfect start. That was about as good as it got for goalmouth action in the opening 20 minutes with a couple of stoppages for injuries really affecting the flow of the game.

Harrow were the first side to break free of the shackles and following a defensive error, James Ewington found himself in the clear but he delayed his shot and gave Sam Roberts time to get back and clear the danger from on the line. Salisbury’s only chance of note in the half arrived after half an hour and saw Dan Fitchett in the clear, but with the striker unable to shake off the attention of the home defence his weak shot was comfortable for Joshua Strizovic to deal with. Harrow immediately responded and would have thought themselves unlucky to not take the lead when Ewington clipped the post following a quick break. That was about it for goal chances in the 1st half with neither side able to find a bit of quality to unlock the game.

The 2nd half saw Salisbury start very brightly and youngster Layton Tulk, on as a substitute for the injured Rose, drew a fine save from Strizovic with a well-struck shot from the edge of the box. The subsequent corner was swung into a dangerous area and with no outfield player able to attack it Strizovic was forced into an unusual clearance with his feet from inside the 6-yard area. The away side continued to pressure and created half chances for Josh Wakefield and Charlie Davis with neither able to properly test the keeper before Harrow started to get a foothold in the game.

The home side were starting to see a lot of the ball but were still unable to create clear-cut opportunities. Moore put a shot wide, Joseph Otudeko was unable to keep 2 efforts down before Michael Bryan finally forced Pat O’Flaherty into action with 15 minutes to go. His well-struck effort was pushed round the post for a corner before further chances for Bryan and  Moore preceded the best Harrow effort of the afternoon. Balai Dembele drove into the box from the left and his cutback found Ewington just 6 yards from goal, with O’Flaherty well placed to deal with the first time shot. The remainder of the game petered out leaving a draw feeling inevitable and so it was when the referee blew the whistle for full time.

With just 3 games left in the season, Salisbury are next in action on Saturday 16th April when they entertain local rivals Dorchester Town.