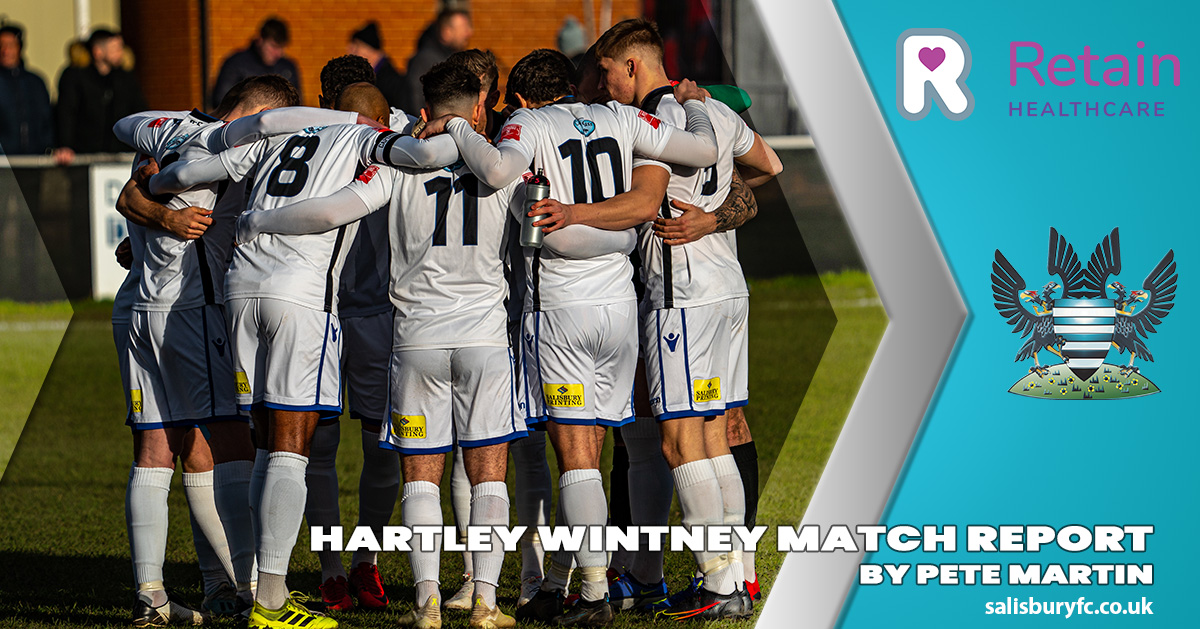 Salisbury recorded their first league win in 8 games with an entertaining victory away at Hartley Wintney. Whites manager Steve Claridge made 2 changes to his team with Charlie Davis and Darren Mullins replacing Ollie Knowles and Marvin Brooks.

Salisbury got off to the perfect start when they took the lead after just 2 minutes. An initial break down the right by Abudlai Baggie saw the ball reach the left wing. From there a good link-up between Josh Wakefield and Josh Sommerton saw the latter square the ball across the 6-yard box and give Sam Ashton the easiest of tasks to open his account for the day.

The Whites continued to look comfortable without crafting many clear chances but they had a warning of the home sides qualities after 24 minutes when Lucias Vine tried a clever flick over Pat O’Flaherty but the keeper was well placed to deal with it. Salisbury responded to the threat in great style to double their lead. Baggie was again involved and after a fine run and cross, Hartley Wintney could only clear the ball to the edge of the area where Josh Wakefield placed his shot just inside the post.

On 35 minutes O’Flaherty needed to be sharp to keep out first Josh Webb’s shot and then Reece Wylie’s follow up effort. From the resulting corner, he made a 3rd good save in succession after a powerful header by Harry Taylor. As before Salisbury reacted well to the pressure and on 40 minutes they scored a third goal. Loose play in midfield by the home side saw Mullins able to get the ball through to Ashton who finished calmly and composed beyond Luke Williams in the home goal. Just a minute later Ashton could have had his hat-trick but a combination of Williams’s hand and Matt Drage heading the ball off the line kept his attempted dink out of the goal. Salisbury’s hope of the perfect 1st half were dashed just before the break when Hartley pulled a goal back. Vine’s cross found its way to Harry Cooksley and his fine strike from a tight angle gave O’Flaherty no chance at all.

The Whites started the 2nd half in as much control as the 1st, without quite being able to fashion as many chances. Their best efforts saw Charlie Kennedy head wide from a corner and Wakefield’s shot being blocked following more good work by Baggie. The home side was then reduced to 10 men on 65 minutes as Harry Taylor was adjudged to have pulled back Mullins when he was through on goal and, despite their protestations, the red card was produced. The sending off seemed to galvanise Hartley and O’Flaherty had to be sharp to save Jordan Edwards well-struck free-kick before, on 87 minutes, a 2nd goal from Hartley set up a grandstand finish. A ball in from the right found Edwards with time and space to finish well and give the home side hope. Despite Hartley’s best efforts, in time added on Salisbury could have added a 4th on the break when firstly Devon Arnold and then Lewys Twamley shot straight at the keeper when breaking forward. The referee then bought an end to proceedings to give Salisbury a deserved 3 points on the road.

The Whites face another tricky away trip on Tuesday 1st February when they make the trip to Somerset to tackle Taunton Town in a 7:45 pm kick-off.