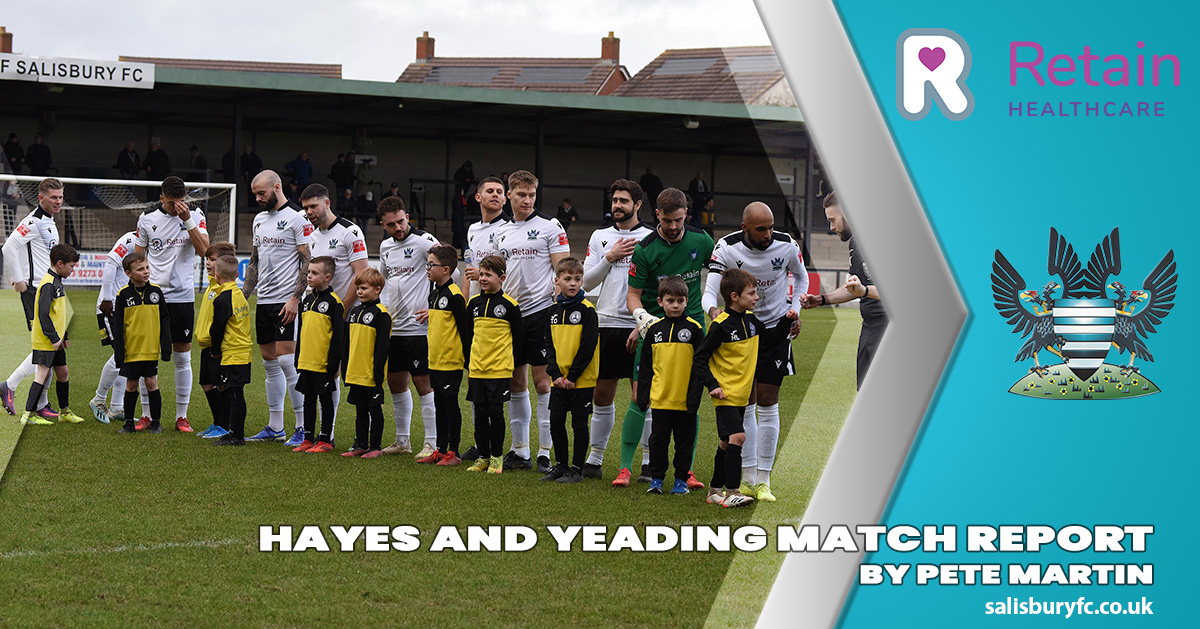 The first half was low on chances for either side with the visitors having the best, and only,  opportunities around 10 mins in when Charlie Wassmer headed just over the bar from a free kick and, with the referee judging Beauchamp had got a touch on it, from the resulting corner the keeper had to be alert to block Francis Amartey’s effort. The rest of the half was very much a midfield battle with neither side able to properly test the opponent’s keeper. There was a lengthy delay around 25 minutes in when Hayes goalkeeper Raven Constable had to go off injured with what looked like a head/facial injury, with Jack Smith coming on to take over in goal. The half was rather stop-start with plenty of niggly free kicks given in the midfield and neither side able to maintain any momentum for any length of time.

The 2nd half saw the game come to life more and with Salisbury playing some nice football they were able to fashion a chance on 52 minutes when Darren Mullings put the ball narrowly wide after a good ball in from Antonio Diaz. The Whites took the lead shortly after the hour mark with what was the best move of the match up to that point. Good work on the right involving Fitchett and Mullings saw the ball reach Diaz in the area and his low angled drive nestled in the bottom corner to the delight of the home crowd. The lead proved to be short-lived however as less than 3 minutes later Hayes substitute Moses Emmanuel was able to bully his way through the defence and slot home an equaliser. This was the end of the scoring in the match but not the end of the chances. On 73 minutes Salisbury’s Josh Wakefield would have been disappointed to blaze the ball well over the bar when it was cut back to him on the edge of the area and Hayes winger Kadell Daniel also did likewise when presented with an opportunity. The final action of the game saw Salisbury striker Dan Fitchett receive a straight red card following a goalmouth incident. With it appearing that the Hayes keeper may have carried the ball over the line Fitchett was adjudged to have caught an opponent and the red card came out.

The Whites face another side chasing the playoffs next when they travel to Chesham United next Saturday 3 pm kick off.