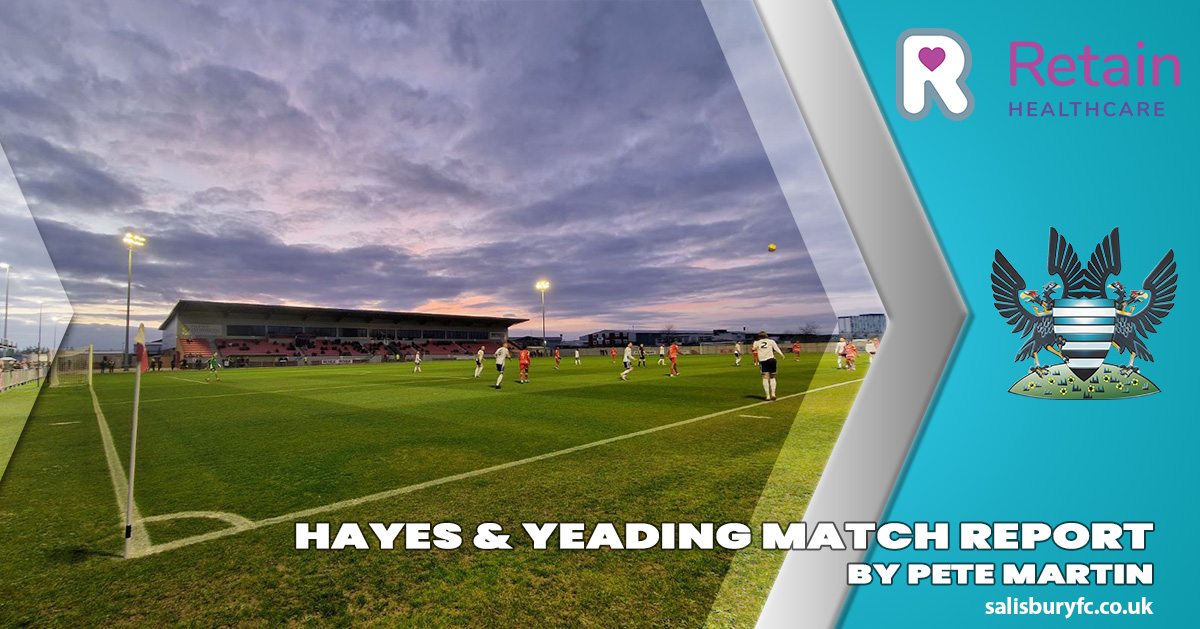 Despite a much better performance Salisbury still went down to a 2nd defeat in 3 days, this time away at table-topping Hayes and Yeading United. There were 2 changes from Saturday’s loss to Merthyr; Calvin Brooks and Charlie Kennedy replacing Sam Heal and Devon Arnold.

The home side were the 1st to threaten after 3 minutes but following an excellent ball through the defence, Kennedy was in the right place to clear the danger from inside the 6-yard box. A much better chance arrived 6 minutes later and it started with Hayes keeper Ravan Constable throwing the ball all the way to the half way line for Cole Brown to run onto. He outpaced Josh Wakefield and fed the ball into Moses Emmanuel who would have been disappointed to see his shot go narrowly over the bar. Hayes were having the majority of possession but an organised and compact Salisbury side were making it difficult for them to create clear cut chances and could even have gone ahead after quarter of an hour but neither Dan Fitchett or Wakefield could take advantage following a good break down the right.

The hosts continued to threaten and just before the half hour mark had their best chance of the half as Hassan Jalloh curled a shot inches wide from the edge of the area following a good run from the lively Kadell Daniel. Salisbury’s best chance of the half was on 33 minutes and should have seen them take the lead. A dangerous free kick was whipped in by Charlie Davis and with Fitchett unmarked 8 yards out he will be disappointed to only plant a tame header straight at Constable. That was about it for goalmouth action for the 1st half with Salisbury doing well to restrict Hayes to half chances and ensure that keeper Pat O’Flaherty didn’t have a real save to make all half.

Hayes made a half time change and bought on Francis Amartey whom almost made an immediate impact only to see the post deny him when slipped through by Emmanuel. 7 minutes later the same player was the beneficiary of a defensive slip but this time found O’Flaherty equal to the task as he made a good save with his body. It was starting to feel as if a Hayes goal was inevitable but they did have a warning at the other end when a deflected Davis free kick fell nicely for Brooks in the box only for Constable to stand up strong and beat the ball away. From the subsequent break Amartey found himself away down the right and his ball across the box found Jordan Ngalo whose 1st time shot was only just wide. The opening goal did finally arrive after 66 minutes and it was Amartey who was instrumental in it. He broke away down the right again and this time when he got the ball across Emmanuel made no mistake from inside the box to break the stubborn Salisbury resistance. The Whites attempted to bounce back but were unable to properly test Constable with a couple of half chances for Fitchett being as close as they came. Hayes continued to look dangerous and they added a 2nd with 8 minutes to play and this time it was Amartey getting his name on the scoresheet. Omar Rowe slid the ball through and with the Salisbury defence claiming offside he rounded O’Flaherty to seal the win and send his side back to the top of the table.

The Whites are on the road again on Saturday when they travel to Harrow Borough for a 3pm kick off.