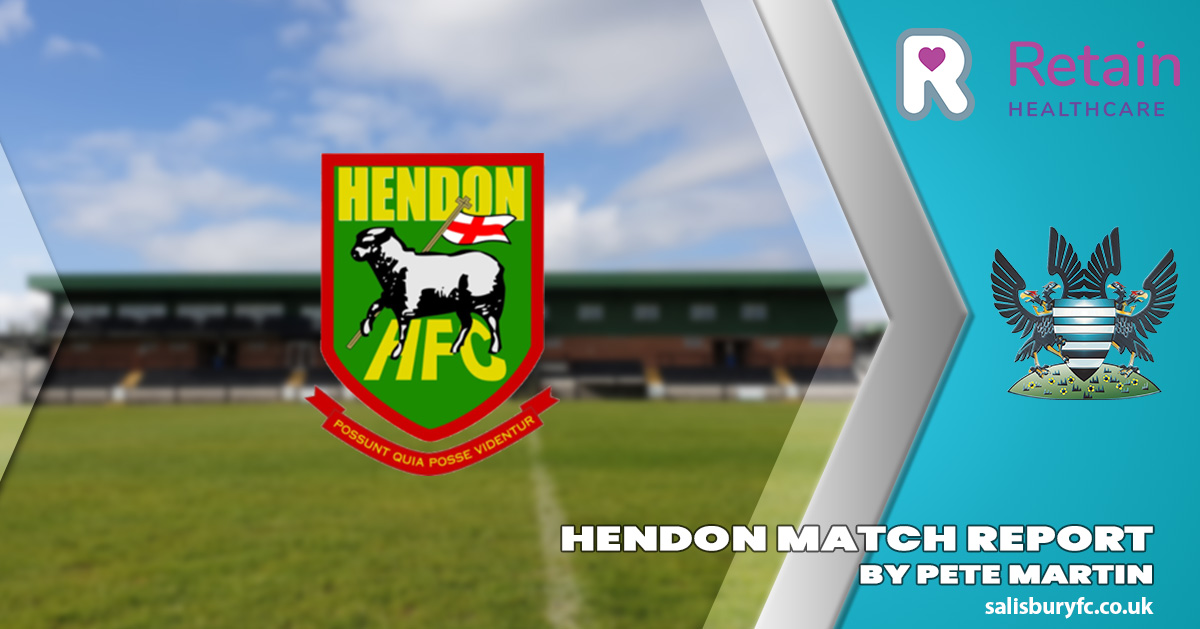 Salisbury returned victorious from the 1st of 2 visits to London in 3 days as they beat Hendon 3-2. The Whites showed 2 changes from their last outing; Lewys Twamley and Devon Arnold replacing Ollie Knowles and Charlie Davis.

The home team made a fairly bright start but it was Salisbury who could have taken the lead after just 5 minutes. Abdulai Baggie’s low ball in from the right seemed to cause confusion in the Hendon defence and with nobody able to get a touch it clattered into the base of the post. The ball bounced back into the danger area and was eventually cleared with no Salisbury player able to pounce. Hendon fired their 1st warning shot after 12 minutes when Joe White easily turned in the box but could only fire wide and just a minute later they took the lead. The Salisbury defence was non-existent and allowed Jayden Clarke to find Frank Keita in the box who took full advantage of the space on offer and finished well beyond Marcus Beauchamp. The Whites could have bounced straight back but Baggie’s shot from distance curled just wide after Antonio Diaz had taken a quick free. The game settled down after the opening quarter of an hour with neither team able to properly test the opponent’s keeper when shooting from distance. The next real chance arrived after 42 minutes and saw Salisbury draw level. Diaz swung a free kick to the back post where Josh Fawole rose highest to head back across goal and give Josh Sommerton the simplest of tasks to nod home from a yard out and ensure that the game would be all square at the break.

The 2nd half saw a dream start for Salisbury as they took the lead less than a minute into it. A clever low header from Arnold saw Fawole racing clear and with home keeper Ethan Wady charging from goal, the striker showed great composure to lob the ball over him from fully 35 yards and nestle the ball in the bottom corner. Hendon’s 1st chance of the half arrived in the 53rd minute and saw Keita balloon the ball over after a good ball in from Eren Kinali on the right-hand side and that proved to be the only real chance they had until very late on. Salisbury were mostly in control of the game without creating many clear chances, although they could have added a 3rd on 75 minutes when good persistence from both Fawole and Arnold saw them win the ball in the area and the latter was able to lay it back to Josh Wakefield who shot narrowly wide of the post. 2 minutes later a 3rd goal for Salisbury did arrive and it saw Arnold deservedly put his name on the scoresheet. Diaz came forward well from left-back and fed Charlie Davis 25 yards from goal. He attempted a shot and after the ball was deflected it fell nicely for Arnold who was alert and moving and he coolly put the ball past Wady into the bottom corner. With a 2 goal cushion, The Whites were content to see the game out and they did a fine job of that until with the last kick off the game Kinali grabbed a consolation with a low shot across Beauchamp and into the far corner.

A much needed 3 points for Salisbury and they will look to add to it on Tuesday 1st March when they return to London to face league leaders Hayes and Yeading.