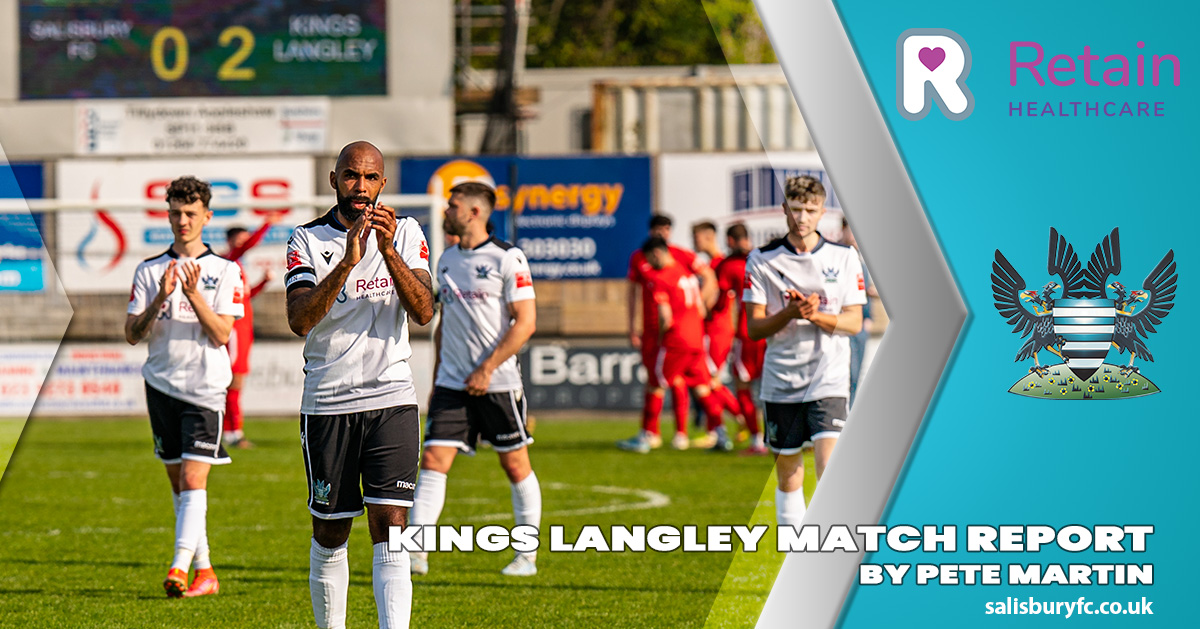 Salisbury’s season ended on a pretty miserable note as they lost their final league game of the season 2-0 at home to Kings Langley. For the first time in over 50 matches, Steve Claridge was able to name an unchanged side against opponents who knew that a win would ensure their survival at this level for another season.

The game got off to a fairly slow start with only half chances for either side, Alie Bangura for Kings Langley and Devon Arnold for Salisbury the 2 players unable to find space for a proper finish after bursting runs into the box at either end. Shortly after the 15-minute mark, the away side took the lead and it was a goal of fine quality. A long crossfield ball was perfectly touched back into the path of Alfie Williams who took one touch before curling a fabulous left-footed strike into the corner of the net.

The goal briefly kicked Salisbury into life and there was no one on hand to take advantage of Arnold’s run into the box before Abdulai Baggie had The White’s best chance of the half with his low shot being well saved by the legs of keeper Alfie Marriott. The last 10 mins of the half saw Kings Langley gain some good momentum and they were able to craft chances for both Williams and Jamie Jellis but neither man was able to take advantage and double their lead.

The second half saw Salisbury dominate in terms of possession but, as has been a regular theme, struggle to find the quality to break down their opponents. Kings Langley always looked dangerous on the break and Bradley Wadkins proved so when he twice went through on goal but both times saw the ball blocked behind before he could fully punish the home defence. In between times, Baggie put a long-range shot high and wide but it wasn’t until the 75th minute that Salisbury really threatened.

A long throw found Baggie on the edge of the box and despite a slightly heavy touch he was bought down just inside the box with the referee showing no hesitation in pointing to the spot. To make things worse for the away side, culprit Aryan Tajbakhsh received a red card meaning they would have to see out the remaining 15 minutes with 10 men. Charlie Davis stepped up to take the penalty and, despite having a very good record from the spot this season, he saw his effort brilliantly saved by Marriott to the joy of the travelling support.

This really did take the wind out of Salisbury’s sails and despite still seeing plenty of the ball they were unable to find any sort of momentum to break down the defence. The game was sealed in time added on when substitute Erin Amu broke down the left and calmly slotted home to ensure his side stayed up amid jubilant scenes from the Kings Langley fans.

The result means The Whites end the season in 15th place and it will surely come as a relief to have time to get players fit and rebuild over the summer ahead of next season.