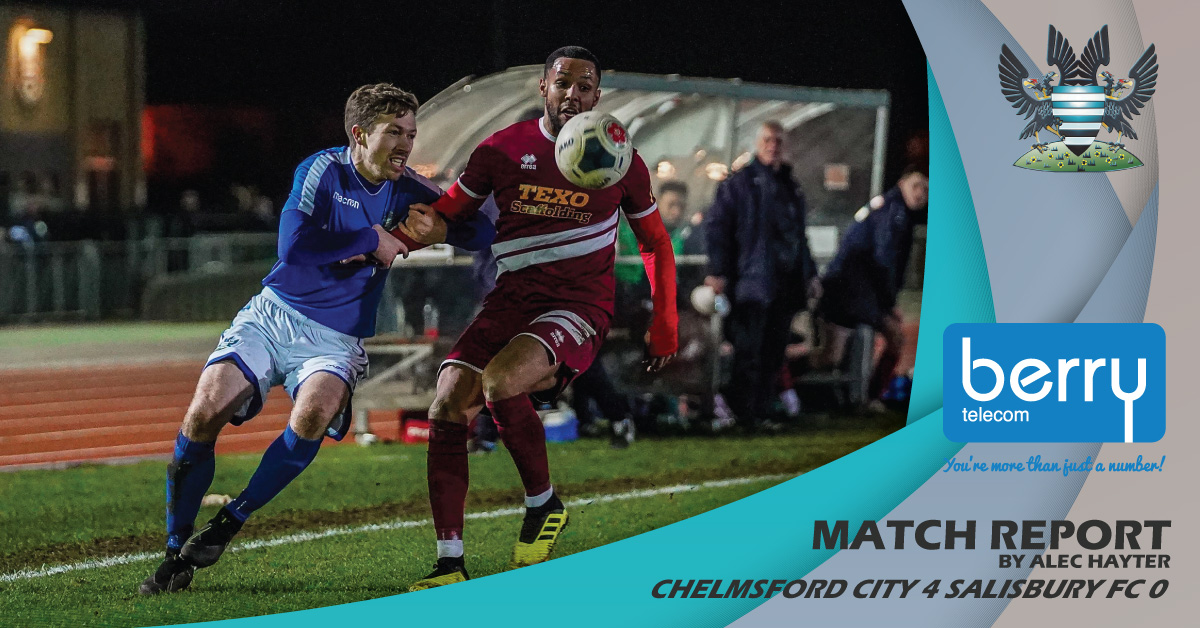 There was frustration for the fans due to an interrupted coach journey, but nevertheless they arrived at the game in time for the kick-off. More frustration however awaited, as it was Chelmsford who progressed to the Third Round of the competition, and I heard a comment at the end of the game that some of our players hadn’t really turned up, although maybe Marcus Beauchamp and some others would not have been included in that assessment.

It was a particularly frustrating afternoon because had the real Salisbury performed as they can, there would not have been much to separate them from their Conference South hosts, especially if early chances had been taken. The home side were ruthless in making the most of theirs and the higher the opponents, the more likely that becomes. Hopefully lessons will be learned from that experience.

It must have been frustrating for the team management who, under the weight of competition unavailability and injuries could do little to make radical changes during the 90 minutes.

The Clarets threatened first after seven of those when a ball in from their left found Christopher Whelpdale, who looped a clever effort with the outside of his boot just wide of the far upright.

The Whites responded immediately with a move involving Dan Fitchett and Shaquille Hippolyte-Patrick, culminating in Bay Downing seeing his attempt deflected over the top. From the corner, Kevin Amankwaah headed high, and a couple of minutes later the visitors thought they should have had a penalty when Dan Fitchett turned his defender but then tumbled to the ground. The appeals resulted in nothing other than a yellow card to Fitchett for simulation.

It was only seconds before Toby Holmes appeared to be bundled over in the box, having wriggled past his opponent, but appeals were waved away although a clear and ovcious contact occurred. I’m beginning to sound like a VAR panel member! I was later told that there was no penalty because the ball had gone out of Holmes’ reach. A look at Match of the Day, and in particular the game between Chelsea and Burnley when, after contact Willian gained a penalty with the ball out of his reach and on its way out of play, would only serve to confuse people trying to understand the decision made at the Melbourne Stadium. The only thing I can think of is that there is no VAR there!

On 14 minutes the home side nearly took the lead with a bizarre incident when Beauchamp belted a clearance against Clarets’ Thomas Knowles, the ball narrowly missing the Salisbury net, and as the home side exerted pressure, six minutes later Chez Isaac and Sam Higgins combined for the latter to put a cross shot just past the far post. That was the home side’s best chance thus far, but they did not have to wait long before taking the lead.

Although the Salisbury keeper was seen with head in hands after the opener was scored, his part in the goal was not a major cause of his side’s going behind. His fairly routine clearance was returned first time back into the Salisbury half along the ground, and Shaun Jeffers was given acres of space through the middle before tucking the ball home.

At that stage, and bearing in mind the Whites’ bright opening, a one goal difference was manageable and looked even more so on 33 minutes when Shaq crossed to Downing who returned the ball across goal only to see Holmes head tamely over the top from 8 yards. That was Salisbury’s best chance up until that point and by that time, had other chances gone in, they would have probably been a match for, or more than a match for, the Clarets, and might have gone on to prosper from there. Earning at least a replay was certainly not out of the question, as they had battled not only against the home side but also against a swirling wind.

Chelmsford then showed what was to follow later, when in time added at the end of the first half events following a Johnny Giles corner saw Lewis Benson forced to clear away from the goal-line, but it was in fact the Whites who had a good chance when a trademark Benson free kick went right across the face of goal, just too proud of Amankwaah.

The home side were handling the gale in their faces better than Salisbury had done in the first half, and in a furious assault Beauchamp had to continue his Eastbourne form with a stunning double save.

On 55 minutes the woodwork came to the Whites’ rescue after Whelpdale had met a cross from their left, but it took a spectacular strike with 18 minutes left to spell the end for Salisbury. There seemed little danger as Giles lurked around the edge of the Salisbury box but he unleashed a vicious left foot shot which dipped at the last moment over Beauchamp to give his side the comfort of a two-goal lead.

It was all downhill from then on and the Whites fell further behind when Jeffers bagged his second of the game on 86 minutes to make it 3-0, before, in time added, a fourth arrived courtesy of Whelpdale – two goals of little importance to the final outcome, but painful nevertheless. Overall, the Clarets, who were the more lively side throughout and often quicker in reaction deserved their win, but it was not straightforward until their second goal went in.

Next Saturday another difficult game is in prospect, with Swindon Supermarine the visitors and, as supporters will know, games against them are always difficult at home or away. Back in August we let slip a two goal lead away from home and had Benson incorrectly dismissed, and neither must be repeated at the Ray Mac so that we can hopefully gain an important three points against another side in contention, five points better off and with a game in hand over us as I write. To top it all of course it is a local derby which always adds more spice so please get behind the team. The disappointment of the FA Trophy defeat must be forgotten, and every effort made on and off the pitch regarding the league campaign where everything is still very much up for grabs. To illustrate that, did you see Yate Town’s result against Taunton?!