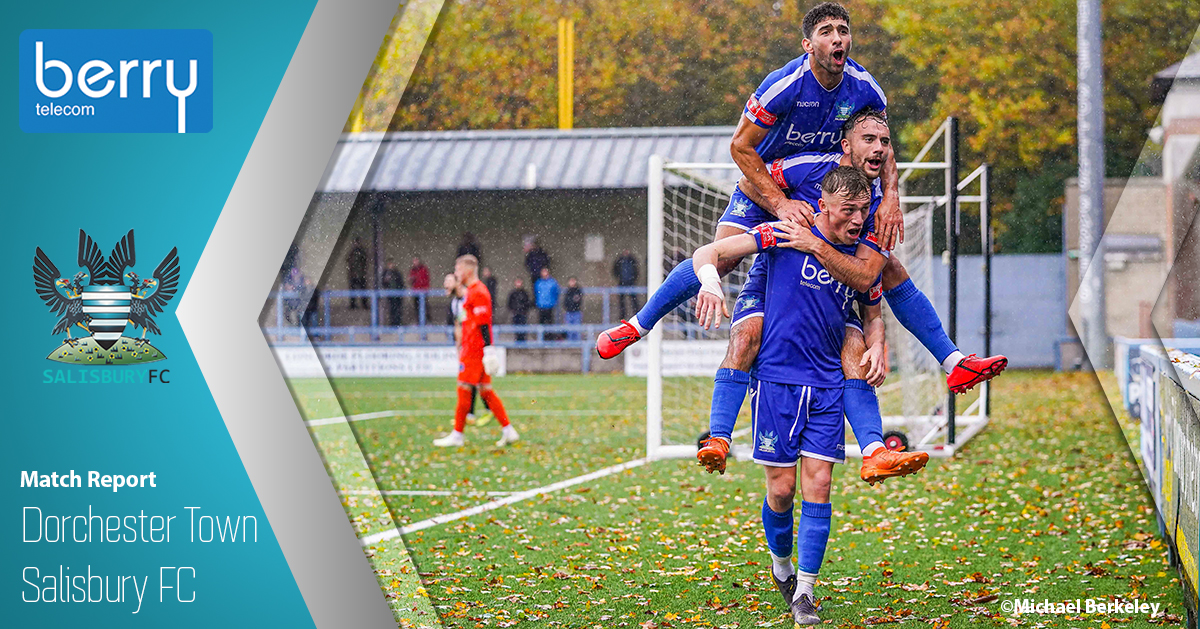 A day of disappointment!………. but only for Elliot Wheeler who, after having entered the action on 72 minutes thought, three minutes later, that at last he had scored his first ever goal for Salisbury FC to add to his only other one for Salisbury City in 2016/7. His header was disallowed, but keep going Elliot, it’ll come….some day!

It’s very possible that the Magpies don’t look forward to playing the Whites, as last season in 4 meetings in league and cup they conceded 15 goals. Today saw that total reach 21 in 5 meetings as Salisbury dominated the game and got their just deserts with a scoreline of 6-1 that did not flatter.

A fair sized Salisbury following helped towards a maximum 600 attendance, but by far the noisiest of that them, in the first half at least, seemed to be around me. I later found out that their names were Baker!

Harry Baker – quick off the mark, but thwarted this time. ©Michael Berkeley

In his first start it didn’t take long for him to make an impression, after only five minutes cutting in from the right and testing home keeper William Buse with a left foot effort from the edge of the box. He did much better five minutes later after Marvin Brooks won a battle for the ball well forward on the right, robbing a defender before pulling the ball back to Baker who unhesitatingly arrowed a right foot shot past the keeper. Yet again it was a case of being in the right place at the right time and that was to be repeated to good effect just before the interval.

After Antonio Diaz saw an attempt fly over on 25 minutes Dorchester had their only success. Just before the half-hour debutant keeper Alexis Andre found himself one-on-one with Kpama Ngoy who had got clear, (the wind might have had a hand in that) and the coming together saw referee Ryan Sayward point to the spot with the Dorchester striker giving Andre no chance to tie things up at 1-1.

Enough was enough for the Whites and on 34 minutes a strong Lewis Benson effort forced Buse to parry to the on the spot Baker but he was adjudged to be offside, and seven minutes later Marvin Brooks hardly troubled the keeper with a header from Diaz’ freekick, but with seconds to go before the end of normal first half time Baker doubled up with a right foot finish arrowed into the top corner from another Charlie Davis cross for 2-1. Charlie’s making a welcome habit of doing that!

The second half started much as the first had ended with the Whites now having the strong wind in their backs to add to the wind in their sails and Baker was involved again, two minutes in, pulling the ball back for Brooks whose header was desperately clawed away by the busy Buse before a two-goal advantage was achieved on 49 minutes, Diaz sending in a swirling corner to the far post where Jack Ball notched his first for the Club.

Salisbury had a minor scare on 50 minutes when Ngoy flashed the ball across the face of the Salisbury goal but  Sam Roberts’ deflection was enough to cause only a corner, which came to nothing, and it was not long before the Whites stretched their lead to three when Charlie Kennedy profited from a goalmouth melee to make it 4-1. Another first for the Club!

It had been one-way traffic for most of the game and it could have been 5-1 on 75 minutes when Wheeler thought he had scored, but there was not too long to wait before that fifth goal arrived after Dorchester’s Ashley Wells was adjudged to have handled the ball in the box. Ollie Knowles, who has a habit of scoring at Dorchester, did so again with a capable finish from the spot. Another first…….but this time a first of the season!

I mentioned the noise around me in the first half but have to say that throughout the second there was a lot coming from the Salisbury technical area as players were “encouraged” not to ease off, and just as I’d written a note that we had scored five without Brooks having got one, he made me scratch that out, getting the sixth just before the final whistle when Benson’s freekick was parried to the far post for maybe the easiest finish Marvin will get all season.

This Salisbury side is really beginning to click, and if current form can be maintained the next games should see further success. As testament to today’s game Magpies’ Manager Leigh Robinson described it as “men against boys”. Salisbury were not the boys!

In the limited number of league games played, Salisbury were not the only ones to achieve a high score and in addition to Poole Town hitting six goals away to Yate, possibly of more significance was Tiverton’s 5-0 victory at home to Walton Casuals, although gained against ten men for miuch of the game, but that does not diminish the task awaiting Salisbury next Saturday.

Before that however we can look forward to the visit of a Weston-super-Mare team on Tuesday evening, who may be smarting from an FA Cup defeat away at Eastleigh. It would be good to keep the unbeaten run going and maintain confidence for the game against Tivvy in the Buildbase FA Trophy. We’re on a roll, and with your support why not?.

Next up at the Ray Mac…