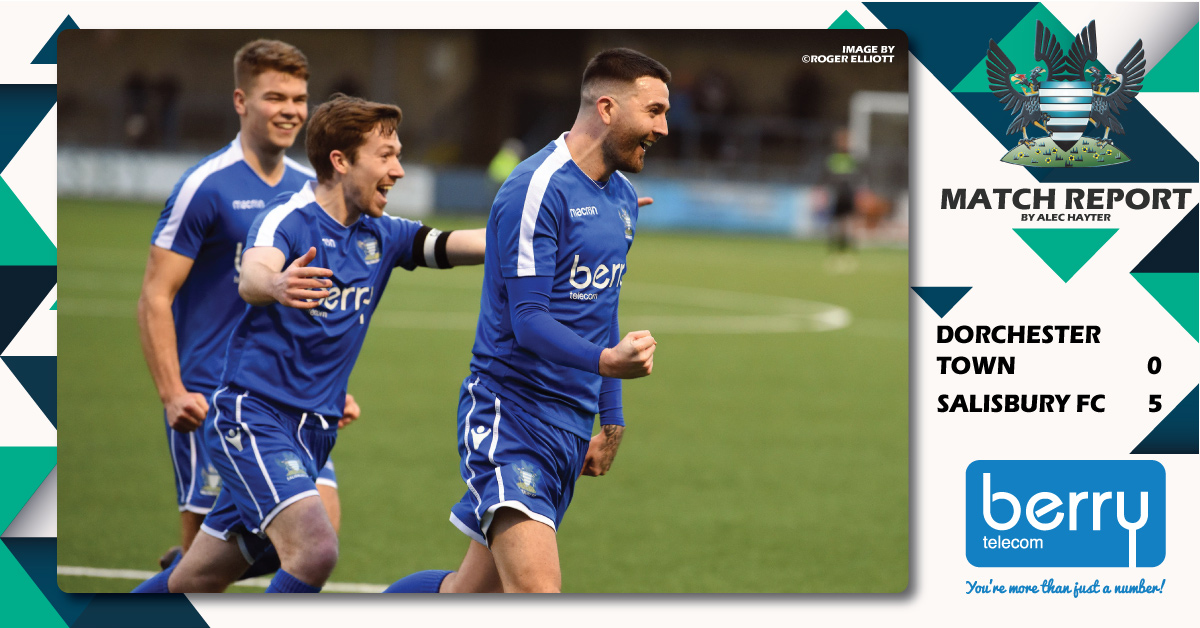 The Whites love playing at the Clayson Stadium, as one of the best 3G surfaces in our league suits their passing game down to a tee, and they took full advantage by handing out a 5-0 mauling to the Magpies, who, in four meetings this season have conceded fifteen goals against us whilst scoring just four of their own.

Yesterday’s result was not however clear-cut until Ollie Knowles notched the second goal just after the hour, and that strike was a carbon copy of his goal in the league cup replay, or maybe this one was better!

After Salisbury had taken the lead on 11 minutes, the home side showed a spirited response, although they never seriously threatened Marcus Beauchamp, before Knowles’ strike eventually opened up the floodgates.

Apart perhaps from Salisbury’s opener, all the goals were of high quality with that first one ultimately proving an easy finish after some good foraging work by Shaquille Hippolyte- Patrick and a pinpoint cross from Lewis Benson. Shaq appeared to have lost the ball but regained it and made his way across the box before playing it wide to Benson, whose cross was too good for home keeper Shane Murphy and gave Toby Holmes the kind of chance that you don’t give Toby Holmes!

That goal, however, followed a good early chance for the home side when on 5 minutes a Franklyn Clarke free kick found Nathan Walker, who tamely put his header wide, and it was the same player who provided the only other threat to the visitors’ goal on the half hour mark when he repeated the error, again from a set piece.

On 23 minutes Knowles had put in Shaq one-on-one with the last defender who got a touch to get the ball back to Murphy and on five minutes later, Knowles had a great opportunity himself when Benson’s curling freekick found him in front of goal with a free header.

The slender 1-0 lead at the break was hardly indicative of the Whites’ control, and the nerves were slightly jangling after the interval when Dorchester seemed to gain a second wind. However, that was all to no avail as Holmes had the ball in the net after 51 minutes but was adjudged to have been offside, and then four minutes later he held off a defender but saw a difficult cross shot well saved by Murphy.

Come 63 minutes, come a great move and strike to really settle the outcome. An inventive corner, made more possible by the true surface, saw Benson deliver a quick pass along the ground to the lurking and aware Warren Bentley, who squared the ball to Knowles to leather in a rising shot past the helpless keeper.

Game, set, and match, even at the dangerous score of 2-0, which became 3-0 only five minutes later, and this time Nathanial Oseni’s ball found not one but two Salisbury players in the clear, having beaten the offside trap, with Bentley demanding the ball to place a curling finish into the corner.

On 78 minutes Bentley fed Bay Downing on the right who tried his luck with a driven cross shot which Murphy somehow kept out, but five minutes later Salisbury added their fourth, with another great move from a set piece with Alex Lafleur, Benson, and Bentley all involved at some stage before Dominic Jefferies crowned a composed and very effective debut with an equally composed finish.

For a period it had been a case of “how many” and on 88 minutes Benson and Downing again combined well to present substitute Dan Fitchett with possibly the easiest goal he will score all season at the far post, before referee Robert Cockle mercifully stopped proceedings with the final whistle.

Obviously this was not the most difficult of matches for Salisbury – whilst it had the great benefit of getting a valuable three points, especially in view of some of the other results on the day, it re-built confidence after two consecutive defeats. The Whites must now try to take that confidence into the game at Hartley Wintney on Tuesday evening – which has a 7:30 PM, not 7:45 PM kick-off by the way). Fans will remember a high-scoring encounter last season, and this season it will be no easier after the hosts’ fine 4-1 win at Harrow Borough where Mitchell Parker grabbed all four of their goals – obviously someone took look out for.