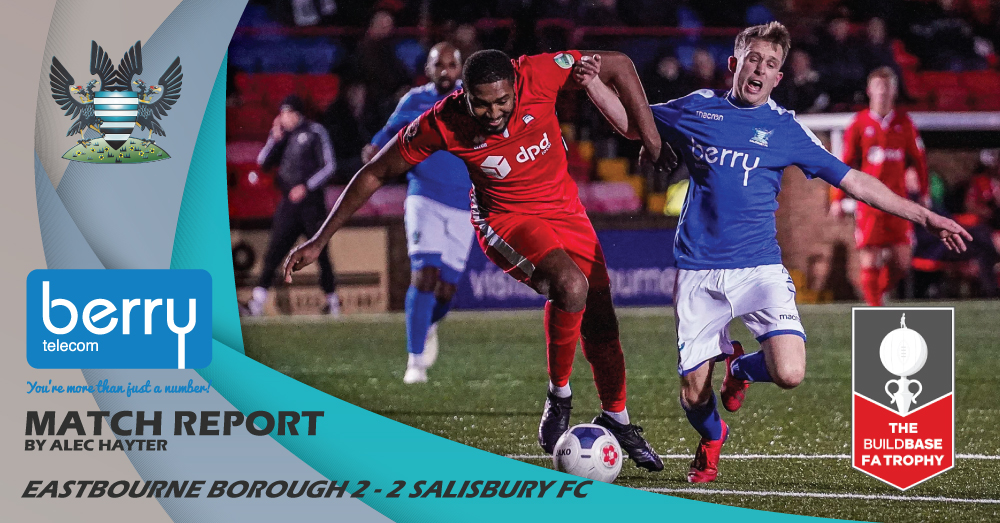 In the first half in the face of a howling gale which is, from memory, a normal characteristic of the Priory Lane Stadium, the Whites came from behind twice to gain a replay on Tuesday evening, and that against a Conference South side who, although they may be struggling in their league, had a chance to relieve the pressures which go with that with some “one-off” cup action. “One-off” however, was not to be the case. To put the performance into context, getting a second bite at the cherry at the ground of higher league opponents represents a fine achievement, especially when the effect of the conditions, injuries and a suspension are taken into account.

The result could have gone either way but, in the end, on balance, a draw was probably a fair outcome. Borough started the brighter with Tobi Adebayo-Rowling crossing for Charlie Walker to head over the top from 10 yards, but the home side got their reward for their early efforts when, in the 7th minute, a long cross-field ball found Charlie Walker, and as the ball returned across the box Dean Cox netted from close range, giving Marcus Beauchamp no chance.

This was not the start that the Whites wanted, but it took only a couple of minutes before they were back on terms as Darren Mullings, who was lively and effective throughout the game, got forward on the right and delivered a measured square ball into the path of Toby Holmes, who did the rest with a calm finish on 8 minutes.

Buoyed by the equaliser, Salisbury threatened in the shape of Lewis Benson whose 25 yard fizzer zipped just wide of the upright, but spirits were again dampened as Eastbourne regained the lead before 20 minutes of the contest had elapsed. Beauchamp, who was to go on to produce some fine saves in the game, was quick to spot danger and raced well off his line to head the ball away from the onrushing pack, but unfortunately the ball fell to Walker, who saw and took his opportunity well, using the strong wind at his back to send a 45 yard attempt into the Salisbury net before the keeper could regain his ground. That was a great finish, using the conditions to the full.

Now, with their tails up once more, Borough came forward and Beauchamp was forced to make two great saves within the space of 3 minutes to keep Cox at bay on both occasions. Once more the Whites reacted and were on terms again just before we entered time added at the end of the first half. If the second Borough goal had been an opportunist one, then the Salisbury equaliser may have made Borough think that fortunes were levelling up.

A delightful through ball by Aaron Dawson found Warren Bentley, who played the ball deeper into the area, but along the way its direction was crucially changed when Manny Adebowale’s shin intervened, home keeper Tom Hadler being completely wrong footed at his near post.

Having faced the howling gale in the first half I was under the impression that conditions had improved in the second, when the Whites would have the advantage of the wind at their backs. If home clearances and goal kicks were anything to go by however, perhaps my impression was correct, although things remained very awkward.

The Whites had a good chance to score a third shortly after the restart when, on 49 minutes, Holmes found himself through one-on-one with Hadler, but the keeper did his job with a good block. Two minutes later Bay Downing got well forward and sent in a cross shot which beat the keeper, but unfortunately also the far post, and from then on there was a fairly even distribution of chances for each side to settle it.

For Borough, the impressive Nick Wheeler was just short of a Ben Overton cross and it took a good clearance by Tom Leak to deny Michael West, but as the game drew to a close, Bentley tried from outside the box on 64 minutes, the ball missing the target. Five minutes later a deep Downing cross gave Holmes a difficult headed chance, but the striker, under pressure from defenders at the far post, saw the ball go wide. The last serious goalmouth action of the game came on 84 minutes when a defensive clearance found Bentley, who had little time to take a pot shot which he could not keep on target.

So, both sides will be listening out on Monday for details of opponents for the winners of Tuesday night’s replay, and that replay promises to be another close and entertaining encounter. A fair number of travelling supporters made themselves heard at Eastbourne and with the addition of the greater number of home supporters Salisbury should have every chance of making progress, but as ever nothing can be taken for granted. Please ensure that you turn up in your numbers and give your team every assistance.

It was already going to be a tough week with a visit from Truro City in prospect on Tuesday, but of course that game will now have to be rearranged. Next Saturday we have a local derby with Poole Town, who, at the time of writing, sit just below the Whites in ninth position, one point behind, although, mainly because of postponements, they have played three games fewer. Two tough games in quick succession follow  therefore, so. please try and come along and lend your support.