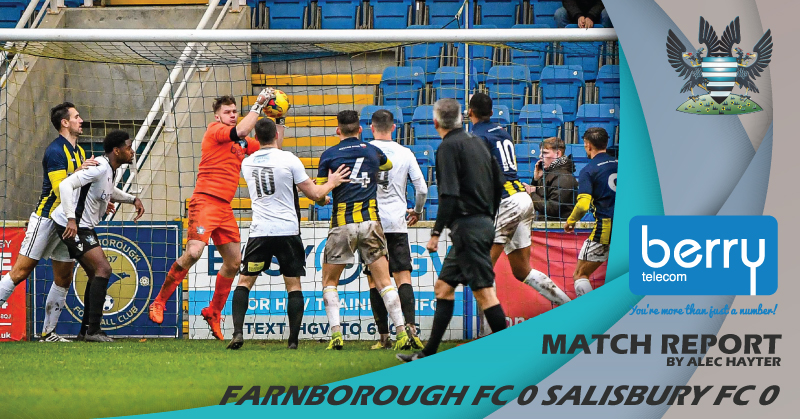 We could have won it, maybe should have won it. We could have lost it, but really shouldn’t have lost it – and we didn’t. The team did enough to get the points, but the 0-0 stalemate and two points dropped however meant that a chance to make a bold statement to those around us at the top of the league was missed, although we should reflect that this was the Whites’ eighth game unbeaten in all competitions, and a point away from home is always good.. There was no lack of effort and commitment against a Farnborough side whose match preview had stated that they had a game plan and intended to stick to it. Whatever it was, it did the job for them.

After only two minutes Salisbury could have and certainly should have taken the lead, but Dan Fitchett’s miss from Bay Downing’s inviting ball might have been passed off as being unfortunate with so much time remaining. However, had that chance gone in then the tale could have been so very different.

At the other end the lively Andrew Sealey-Harris was presented with an opportunity on 8 minutes but sent his finish against the stanchion, before, shortly afterwards, Downing got forward into the right channel but disappointingly scuffed his effort which was easily kept out by home keeper Liam Beach.

It was then Boro’s turn again, with Sealey-Harris sending in a dipping free kick which Gerard Benfield was forced to spoon away, and the same player then manufactured space for himself before, going towards the corner, he directed a reverse cross shot just past the far post.

It was Salisbury who finished the half the stronger in terms of goalmouth action, with Toby Holmes seeing his 28th minute effort saved by Beach, and then, 6 minutes later, combining well with Downing before bringing a good stop from the home keeper. In what was a good spell Holmes out-ran the home defence before being blocked out, and on 41 minutes Alex Lafleur fed Shaquille Hippolyte-Patrick, who went along the edge of the box before letting fly with a right foot effort which was again dealt with by the keeper.

In terms of real chances the first half produced a score of 6 to 2 in Salisbury’s favour, but things evened up after the break. Seven minutes into the second half, Hippolyte-Patrick squared the ball for Downing to test the keeper once more before, on 55 minutes, Benfield was forced to pull off a point-blank save from home central defender Adam Brice, who had somehow managed to get in on the near post. Brice blotted his copybook seconds afterwards, putting a free header over the top from close in after meeting Reggie Young’s corner.

Aaron Dawson sent in a rising drive just after the hour, which keeper Beach touched over, and with 20 minutes remaining the Whites suffered from the woodwork as Hippolyte-Patrick fed the ball inside to Holmes whose shot crashed against the upright.

Two effective home changes were then made, and Benfield did well to keep out a free kick from substitute Perry Coles on 81 minutes before, a few seconds later, Boro thought they had scored, only to see the effort ruled out.

With two minutes remaining, another corner gave Brice a headed chance but the ball went harmlessly across the face of goal and past the far post. Both sides were pushing for a result and right on time Lewis Benson’s free-kick was near enough to hit the side netting.

However, the home side might have snatched all three points in the 5th minute of time added when Coles’ free kick again found Brice, with Benfield pulling off a tremendous save from a downward header.

Well before that happened, Farnborough should have been reduced to 10 men as video evidence shows a blatant head-butt on Dan Fitchett. Unfortunately it appears that only the camera saw it, as neither the referee nor his assistant could have – otherwise a red card would surely have been produced from the referee’s back pocket.

Moving swiftly on, it’s back to cup football next Saturday when Kings Langley visit the Ray Mac, and hopefully those superb supporters who travelled to Farnborough and out-shouted the home crowd, will join with lots of other Salisbury supporters in getting behind their team to ensure progress to the next round of the Buildbase FA Trophy.