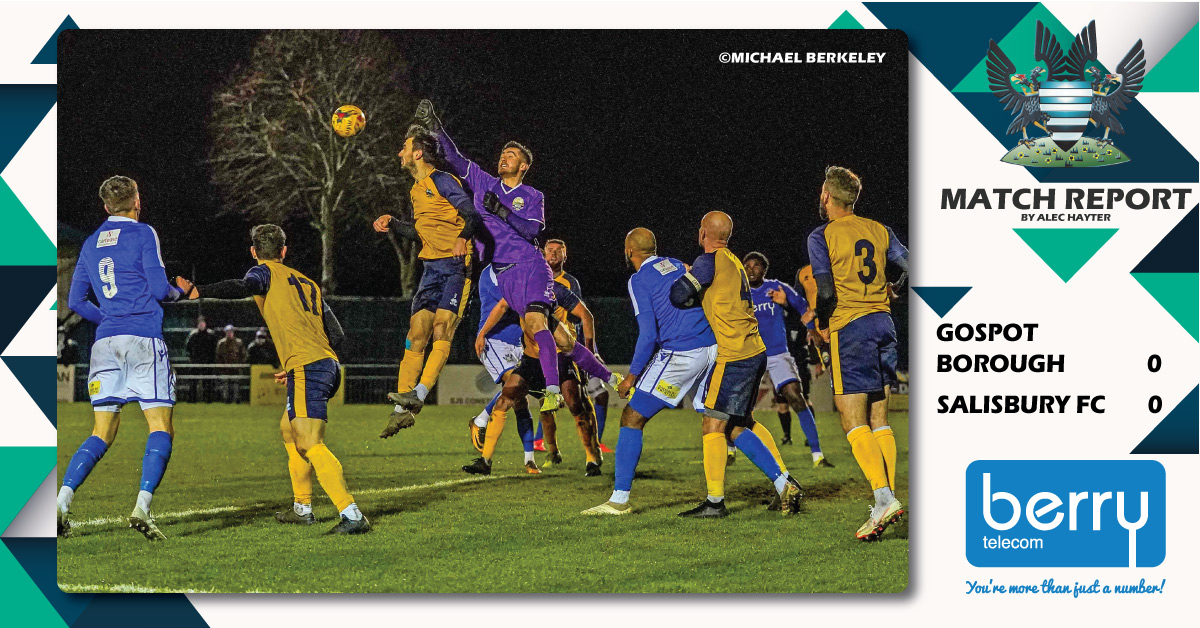 The only highlights on show were those in the distance, omitted by the high lights of the Spinnaker Tower, and I found myself at times paying more attention to them than what was happening on the pitch. Having said that, Salisbury can take positives from having gained a point away from home, keeping a second clean sheet in a row, and having some players returning from injury approaching their usual standards.

Talking about approach, it was difficult to understand why the home side, having recently beaten league leaders Truro City at Privett Park, played with so little ambition up front, although of course they had concede three times at Chesham, which may have caused their caution. That, combined with a solid defensive performance from the Whites produced a sterile spectacle for the few spectators (mostly from Salisbury, it seemed) who turned up. The Whites contributed by showing little threat themselves against a strong defence, although home keeper Kingsley Latham became the busier of the two custodians in keeping out what could just about be called chances.

The high points (a relative term), such as they were, saw Gosport’s Ryan Woodford head just over the bar from a Theo Lewis corner on 11 minutes, and then another “highlight” came at the other end when Latham was forced into a good save from a Lewis Benson free kick five minutes later.

Six minutes into the second period, another Benson free kick was just wide of the mark, and on an evening when set pieces descended into the poor quality of the game, that was the nearest he got to breaking the deadlock.

On 53 minutes a header from Gosport’s Sam Roberts went over the top from another Theo Lewis corner, and midway through the second half Latham made a great save from Nathaniel Oseni, who was on target with an effort in front of goal from a Benson cross. Ten minutes later saw the only other half-hearted threat on either goal when Boro’s Lewis met a free kick at the far post, but the former White could only aim his finish tamely at Marcus Beauchamp who was seriously stirred for almost the first time in the match.

I think that says it all, and in fact searching through my notes I can find nothing further of interest, except perhaps to comment on the performance of the officials, which, on one occasion in the second half may have cost Salisbury the chance to score, and probably would have settled the game when a free kick was awarded for a tackle which appeared to be well inside the penalty area, but was given outside. For the home side another name familiar to Whites’ supporters, Tyrell Skeen-Hamilton, did his best to earn a penalty following a superb Lewis Benson last-ditch tackle in the box, with appeals being correctly ignored by the Referee who at least got that right. All of that though is a collection of “Ifs, buts, and maybes”!

Manager Steve Claridge will be looking for a more productive showing going forward at Harrow on Saturday. Back in October they gave us a good game at the Ray Mac before we ran out 3-1 winners courtesy of goals from our London contingent Shaquille Hippolyte-Patrick and Nathaniel Oseni. Let’s hope that with this being a local game for them they’ll do the same again, but don’t be fooled by Harrow’s 18th position in the league, as going to Earlsmead is never easy.

I am sure as I can be that many of you took the trouble to swell (!) Gosport’s crowd to a massive (!!) 205 last evening, and hope that you will make the trip to support your team once more on Saturday. Maybe then there will be more to encourage you to raise your voices!