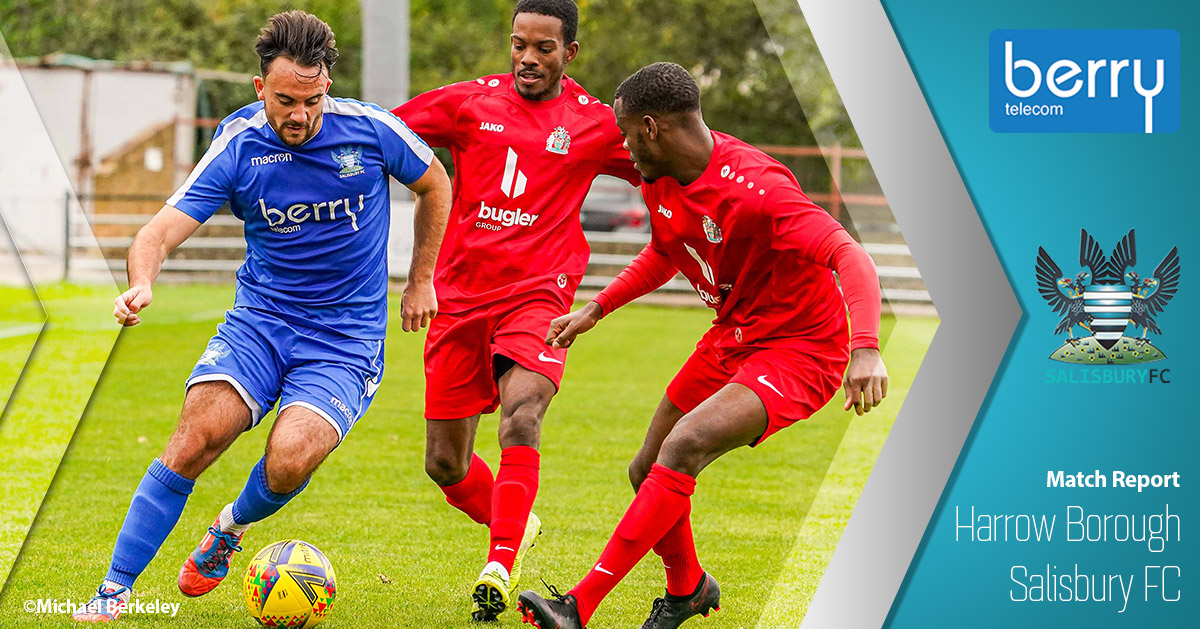 To bring anything at all home from the Earlsmead Stadium is a bonus, but to come from behind and do so with a depleted squad as well as being forced to make an early change in defence must surely signify that the Whites have really started their season. The team managed the situation very well and as a whole deserved their success against a lively home side, strongly resisting Boro’s efforts late in the game. The introduction of Warren Bentley, in particular, had a telling effect just after the hour.

Salisbury named a starting lineup missing the injured Elliot Wheeler, as well as Lewis Benson – who was unavailable for the best of family reasons (congratulations!). On the half-hour, Josh Sommerton, who had been trying to shake off a very early knock, was forced to succumb. I understand that although on return to Salisbury the young defender was seen on crutches, it is hoped that there is nothing more serious than bruising – painful though that is!

After a cagey start for the first 15 minutes, Charlie Davis, in a more forward role, ran at the home defence before unleashing a drive from just outside the box which flew over the top, and after some more even sparring, the next real action occurred when Darren Mullings, again well forward, was unlucky with an effort just off target.

On 31 minutes the injury to Sommerton finally took its toll and he was replaced by Jack Ball, and apart from a wild effort from Lewis Cole just before the break there was no further goalmouth action and it was scoreless at half-time. Straight after the interval, and against a strong wind it was Salisbury who produced the first chance when on 47 minutes another Diaz cross saw Marvin Brooks stretch for a header, the ball falling to the off-balance Davis who could do little to avoid skying it.

Eight minutes later Ball tried a speculative 30 yard effort which flew wide before the hosts then had an opportunity, having been awarded a freekick on the edge of the Salisbury box. The wall did its job well to deny a fierce attempt by George Moore, who was to go on to be a thorn in Salisbury side in his advanced wingback role. On 64 minutes it was Moore who opened the scoring when he drove a low wind assisted shot which was awkward for Liam Armstrong, hitting the ground in front of him. Armstrong unfortunately allowed the ball to slip through his grasp, but in the latter stages of the game more than made up for the error.

The Whites’ reaction was immediate, and the ever-increasing input from Diaz saw him beat several players before having his left foot effort saved on 65 minutes. It was only six minutes later however that Salisbury got back on terms, when Armstrong was charged with the task of taking a freekick well outside his area. The keeper, whose kicking against the wind was exceptional, was able to find Marvin Brooks, whose headed flick to Diaz gave him the chance to again beat a defender before calmly placing his low shot past Southampton loanee Matthew Hall.

The initiative was now even more with the visitors and it took only another five minutes before they scored again with what hopefully will be a typical finish from Brooks, who made the most of a sharp opportunity.

The expected onslaught started and on 81 minutes Armstrong excelled himself with a great parry from Moore’s far post attempt. Seven minutes later a probing ball into the Whites’ box found Anthony O’Connor who, leaning back, fired well over the top from 10 yards, and to complete the action, in time added, Moore was again prominent sending a left foot drive at Armstrong who this time dealt with it capably.

As with Wednesday’s game at Kidlington, the players put in a tremendous effort, but this time received the correct reward as everyone played their part in a team victory which showed determination and character against the odds. Next up is the re-arranged game at home against Beaconsfield, and the lack of a midweek game caused by Merthyr’s unfortunate demise will hopefully help with the current injury list.

It would be good if supporters could threaten the imposed 600 crowd limit, and if they can be as supportive and loud as those who made the trip to Harrow, then they’ll be heard in the City Centre!