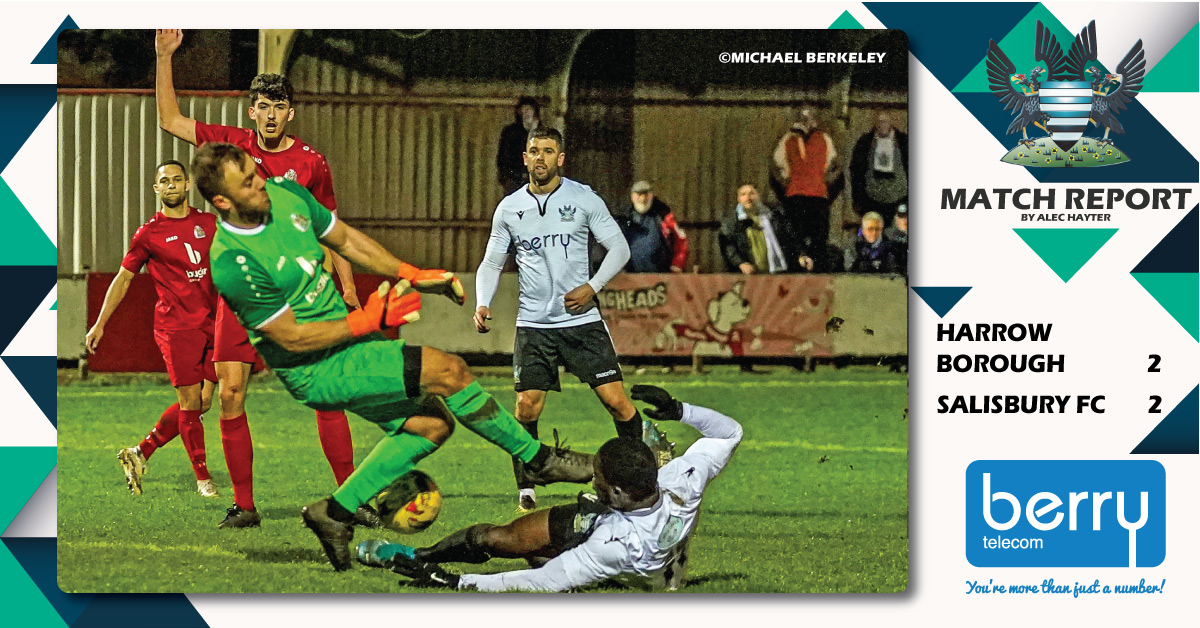 Last night’s Harrow programme was written for the original game on 29 February, but was nevertheless up-to-date as to the weather conditions which prevailed a week later. A strong wind and heavy rain made life difficult for both sides and the contest descended into one lacking much constructive football. It was probably likely that any goals scored would come from the penalty spot, rather than any great moves, and that is how it panned out. Both sides were under the same disadvantage with the weather overall, but the same could not be said about the difficulties produced by the playing surface, which had obviously taken a pummelling. Whereas the weather was the same for both sides, it was obvious that the home side enjoyed a slight advantage from knowing their pitch.

After the game manager Steve Claridge bemoaned the loss of a third player in a short space of time with Nathaniel Oseni now suffering from injury, and that following Bay Downing’s exit and the recall of Tom Leak, but Weymouth’s Ashley Wells, who was drafted in for a difficult debut against the Borough strugglers had a satisfactory start.

Salisbury had the benefit of the wind at their backs, but it was slightly against the run of midfield play in particular that they took the lead on 17 minutes. A long ball found the willing Toby Holmes, who got far enough away from Shaun Preddie to encourage a desperate tackle which saw the striker sent sprawling. Shouts of “he got the ball” can be irrelevant these days, with the punishment now also being determined by other factors, and Warren Bentley stepped up to blast the ball high into the net to give his side the lead.

That lead lasted only 6 minutes however as we were “treated” to another spot kick, this time following a clumsy challenge on the impressive Brendan Matthew, who had got in the clear. Matthew placed his kick almost down the middle with Marcus Beauchamp having assumed a different direction.

Two penalties in the space of 23 minutes seemed exceptional, but a third 10 minutes later made some of us wonder where it was all going to end. In one sense it was a good job that these occurred in the absence of not much else though, and again, the lively Matthew was involved, and this time suffered contact in a melee of flailing feet. Déjà vu as Matthew converted once more to give his side the lead.

Salisbury might well have profited from what looked an incorrect decision not to call an offside on 42 minutes when Holmes and Shaquille Hippolyte-Patrick swapped passes, but home keeper Tyler Tobin did well to block out Holmes’ finish. A second opportunity for an equaliser came and went two minutes into time added when a Lewis Benson free kick stung Tobin’s hands, but, apart from that caused him little difficulty.

The Whites, now facing the gale, gave an improved second half performance, but that is only a relative term in an overall poor game. On 59 minutes a Josh Sommerton corner found Jake Wannell who headed back across from where Shaq hardly tested the goalkeeper, and Salisbury then had a let-off when, 7 minutes later, the ball evaded Wannell to leave George Moore in the clear. Beauchamp had come well out of his goal but Moore was forced wide and as the Harrow man tried to finish from a fairly tight angle Beauchamp managed to block the ball to safety.

A few seconds later a Michael Bryan corner found Anthony O’Connor whose effort was cleared off the line by debutant Wells, but it was the Whites who finished the stronger.

A surging Wannell run gave him the opportunity to fire a left foot effort at goal, but the pitch had other ideas and the bounce caused the defender’s finish to fly high and embarrassingly wide. He then headed wide from Benson’s free kick on 82 minutes, but in a final go Salisbury grabbed an equaliser two minutes into time added. After having forced Tobin into more serious action a second penalty was awarded as Joshua Andrew appeared to bring down Holmes, and with Bentley now off the field, Benson stepped up to blast home the kick and secure a point which, although welcome, in the scheme of things may not have much bearing on the season’s outcome.

A match containing four penalties gave little else other than the unusual statistic that all were earned by the respective number 9s! As a spectacle, this game wasn’t one and there was only one team who seemed to be able to pick out colleagues wearing the same colour shirt. That team wasn’t Salisbury and on that basis, and because of a tremendous effort in harrying and closing down their visitors early, maybe the home side can consider themselves slightly unfortunate not to take all three points.

The performance will have to improve substantially for the trip to Truro City on Saturday in order for Salisbury to avoid an empty-handed return to Wiltshire. Let’s hope that the Whites can overcome the Treyew Road prevailing wind and slope, and not least of course a side who must be red-hot promotion favourites.