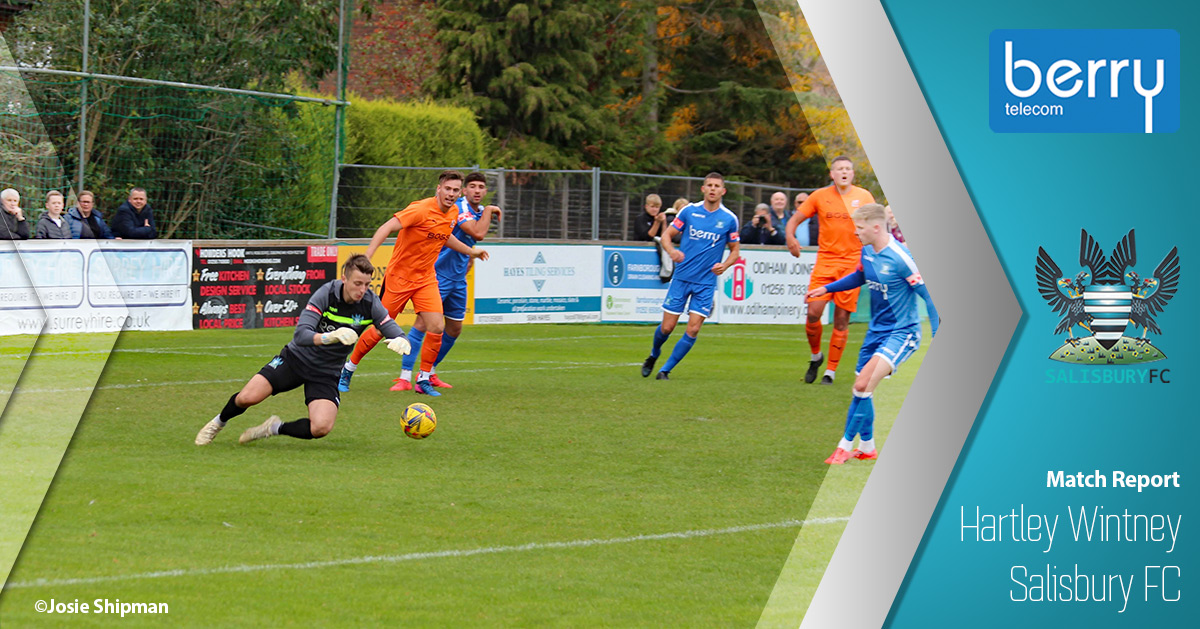 Some things don’t change but others do, and in the first category the Row didn’t change their record of never having beaten the Whites, whilst what did change was the ending of the hosts’ unbeaten home record this season.

Whilst the game was sometimes not of the highest quality football-wise, tremendous effort and commitment from both sides made for a ding-dong battle which the Whites came through. The Row were obviously buoyed by their fantastic comeback against Barking a few days previously in the FA Cup, and indeed it was a question of two sides with great resilience on show, as of course the Whites made their own dramatic comeback against Poole Town seven days previously.

Salisbury were the first to show in front of goal when on nine minutes Antonio Diaz cut back inside onto his right foot but sent his finish over the top from the edge of the box, and four minutes later when Dominic Jefferies fed Dan Fitchett, whose right foot effort went at keeper Luke Williams. Unsurprisingly, the home side responded, but Tom Bird should really have done better with a close range opportunity which he ballooned over the bar.

On 25 minutes a short Lewis Benson corner found Diaz, the ball eventually working its way back to Benson whose fierce drive was blocked, whilst at the other end seven minutes before the break Darren Mullings showed immaculate timing to get his body in the way to block a Mitchell Parker attempt at the far post.

Five minutes before the interval however the breakthrough came when Charlie Kennedy played a piercing ball through to Diaz who made no mistake with a low finish to give his side an interval lead, and presumably a pleasant half time break.

The second half started in similar fashion to the rest of the game with lots of midfield action and was fairly even, but a short time after the re-start Manager Steve Claridge freshened things up, Vaughn Covil and Harry Baker joining the action in the place of Benson and Fitchett. This had immediate effect and on 74 minutes it was Baker who was, for the second week running, in the right place at the right time to stab home the Whites’ second. This followed good work started by Marvin Brooks whose crossfield delivery saw Covil nip in front of his defender, the ball falling at the feet of Baker who did the rest.

The goal put distance between the sides but Hartley Wintney were in no mood to give in. Five minutes after the Whites’ second Dominic Griffiths thrashed at the ball which went into the box at such pace that Ben Wright knew hardly anything about it as his right foot connected, with the ball fizzing narrowly past the upright.

With 10 minutes remaining only the woodwork prevented its becoming 3-0 to the Whites when Kennedy was unlucky to see a header clatter the upright after he received a searching cross from Jefferies, and with three minutes of normal time remaining Diaz was again involved, as he had been in most things during the afternoon, giving Baker the chance to fire in a right foot effort which keeper Williams brilliantly kept out at his near post.

Just before the final whistle a speculative overhead effort from Sam Argent went wide of the upright but at the other end the Baker/Diaz combination saw another effort just go past the post, before, to finish the action, the home side’s substitute Toby Raggett got to the byeline and puilled back an inviting ball to Parker who could not keep his finish down.

Hartley Wintney is not the easiest of places to go. A solid Whites’ performance maent that they returned to Wilstshire with maximum points whilst keeping a clean sheet, and that must represent a very satisfactory afternoon’s work.

Next Saturday Salisbury go to a favourite (plastic) hunting ground when they visit Dorchester Town where last season they had success in every meeting, but although the Magpies lost a tough match 2-0 at Swindon Supermarine today, they are obviously capable of better things, having defeated fancied Tiverton Town at home in their previous league outing.

A strong following travelled to Hartley Wintney to support the Whites, augmenting the hosts’ normal crowd, and it would be great if that support could be repeated at Dorchester.