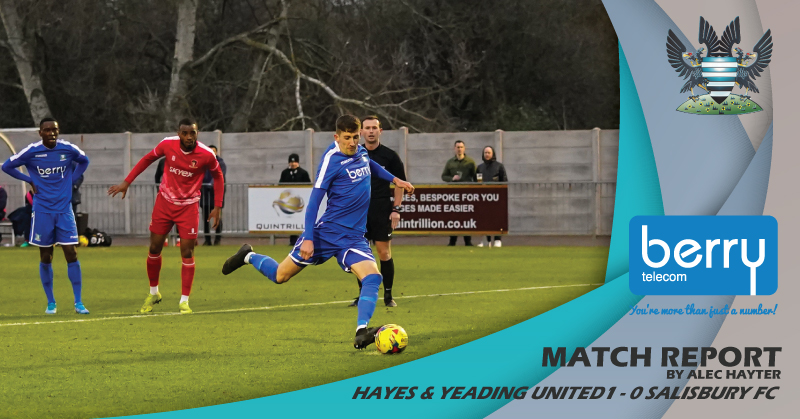 Manager Steve Claridge left the pitch shaking his head after a narrow 1-0 reverse which ended a long unbeaten run, but anyone who had the chance to read the match day programme before the game might have been prepared for the way in which it panned out. because of the report it contained about the home side’s cup escapades last Saturday against Oxford United.

Hayes & Yeading had been outplayed in the first half but produced a stirring second, although they could not retrieve the situation where their visitors had taken the lead. Today Salisbury had no less than 11 efforts on goal during the first half to only three threats from the home side, and ended up paying the penalty in more ways than one.

They should have been ahead after 2 minutes when Nathanial Oseni met Josh Sommerton’s corner but could only put his header at the keeper, and United responded immediately with Jack Sheppard’s curler from the edge of the box.

On 9 minutes Gerard Benfield did well to keep out an Elliott Buchanan back header from Omar Rowe’s free kick, but that was the last we saw of the home side as an attacking force until nearly 40 minutes had elapsed.

In the meantime Darren Mullings saw his right foot shot deflected over the bar on 12 minutes and 5 minutes later, when Josh Sommerton got round the back of the defence and pulled the ball back to Toby Holmes, the striker fired over the top.

Just before the half hour Shaquille Hippolyte-Patrick cut inside but could not keep his finish down and on 34 minutes Aaron Dawson was unlucky with his right foot fizzing effort which went just wide of the upright as Salisbury increased the pressure.

With 9 minutes of the first half remaining a good combination between Holmes and Shaq allowed Mullings another effort on goal but this too was deflected over the top, whilst only seconds later the Whites had a golden opportunity to take the lead.

Warren Bentley, who had played in behind Holmes, got well forward, and was tripped by Keano Robinson with referee Tom Danaher in no doubt as to the award of a spot kick. Home keeper Jack Smith guessed right, however, but still had to do well to keep out a well struck Holmes penalty.

On 38 minutes only a great last ditch tackle from Kevin Amankwaah prevented Hassan Jalioh making the Whites pay with Hayes’ only other first half incursion into the Salisbury box with the Whites well on top. In the last 5 minutes of the half, Mullings fired wide after receiving a pullback from Holmes, and in the closing stages Lewis Benson’s pass to Shaq saw a fierce attempt at goal touched over by Smith.

On 44 minutes Benson worked the ball to Oseni who had an effort blocked and to finish the half, Mullings had yet another effort deflected over from 25 yards. At the break hopes were high for the second period, with one of the home officials left wondering how his side was still on equal terms at the interval. He was as delighted as most Whites fans were disappointed.

He did not have to wait long for his side’s response as United set about their task and as much as the first half had been one of Salisbury domination the second was almost exactly the opposite in possession terms with the Whites only producing one notable effort on goal in the last minute of normal time.

It only took 10 minutes from the restart before Hayes threatened with a James Clark attempt and, only seconds later, Rowe missed the target with a left foot effort. The tempo and pressure was building and on 59 minutes the woodwork saved Salisbury as Joseph Grant met a cross from the left with a sweet volley, but the relief was brief as 2 minutes later Ogochukwu Obi tumbled in penalty box mayhem before getting up to convert the kick for what turned out to be the only goal of the game.

On 88 minutes the same player brought a good save from Benfield, but the strong travelling contingent, who were noisy in support throughout, must have felt that the one goal deficit could be righted, and especially when Holmes got on the end of the Dawson cross from the right. However, the header went well over the bar to sum up the Salisbury’s day.

The Whites were missing two important regular players in Bay Downing and Ollie Knowles, both suspended, which meant that Amankwaah occupied Downing’s place with Jake Wannell making his first start since his horrific injury at Poole Town. I have to say that during a “never been away” showing he showed no signs of his injury, and this must bode well. Unfortunately he had to leave the action on 65 minutes but I understand that the reason was simply an attack of cramp, which of course is understandable after such a long lay-off. It appears that he will be fit for the Buildbase FA Trophy game next Saturday, as will Amankwaah, who suffered a dead leg in today’s game but who did well to soldier on to the end in spite of that. For the sake of completeness, I also understand that Danny Young had called off at short notice because of illness, meaning that there were only 3 substitutes on the bench, one of whom was trainer Sam Dible.

There will be much more choice for Steve Claridge next Saturday and if his side can take the chances they will undoubtedly create then they could well progress into the next round of the Trophy, although nobody will be taking the opponents lightly at any stage of the game, and especially after half-time!