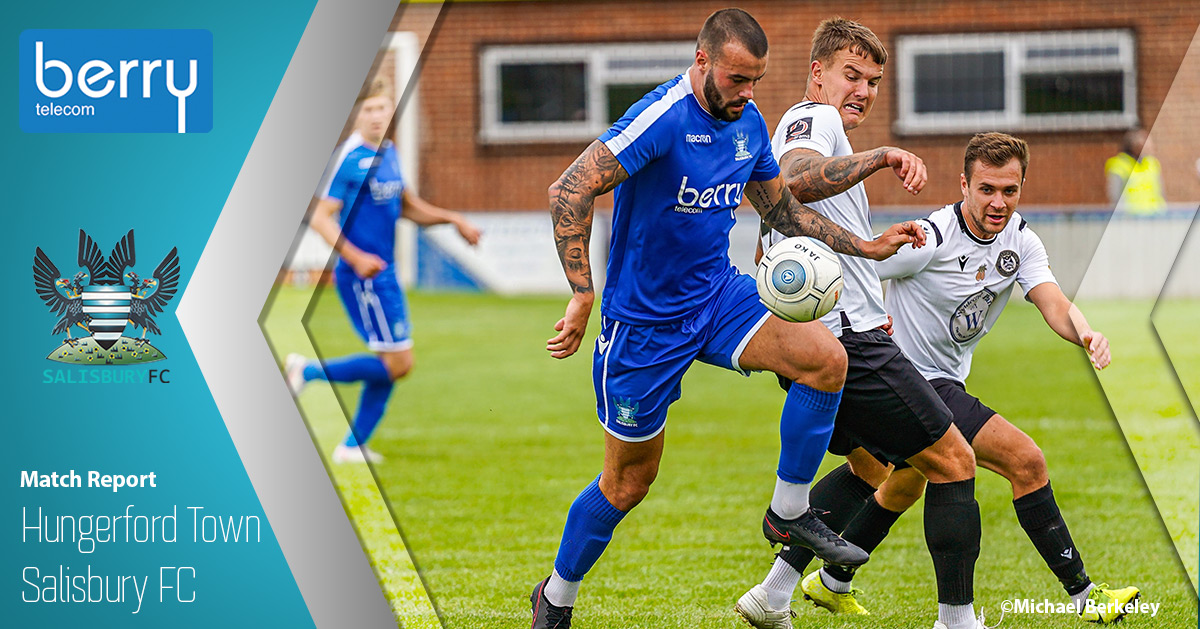 The first real test – mission accomplished! …..and the term “accomplished” describes the Whites’ performance for the majority of this game. Steve Claridge said the workout was “ideal”, in that, as opposed to the previous friendly matches, his players were tested at a higher standard and for the most part came through very well. This particularly applied during the first half when Salisbury got away to a dream start with Lewis Benson’s corner being met by Martin Brooks in space at the far post to beat his ex-Poole Town colleague Luke Cairney.

…..and talking about players being familiar to each other, whilst Marcus Beauchamp used to play for Hungerford, ex-Whites Matt Partridge and Luke Hopper were included in the home starting lineup, with, in the first 45 minutes, Beauchamp having not much action, in contrast to the busier Partridge, and Hopper finding life difficult against the Whites’ rearguard.

The only threat in the first half hour came from the impressive James Rusby, with a long throw which was scrambled from the danger area early on, but for Salisbury, Brooks was again involved from another Benson corner on 28 minutes when he headed back across goal to force Cairney into punching the ball away. Seconds later it was Antonio Diaz’  turn as provider when his corner found Brooks at the far post but the header missed the target.

On the half-hour a headed clearance found the boot of Town’s Kensley Maloney and the crossbar is probably still rattling from a rasping volleyed drive which might have equalised. However, it only took a further five minutes before the leveller arrived, with a sharp Ryan Seager finish into the corner beating the Salisbury keeper. That was completely against the run of general play at the time.

Before the interval the home side threatened once more with a Callum Willmoth corner which went straight into the danger area but somehow managed to bypass all in a crowded box.

wholesale changes were made with seven substitutions, but it was one of the original lineup, Dan Fitchett, who robbed a defender in the box and unselfishly tried to square the ball but a defender s hastily blocked the ball away.

There followed an expected reaction from the home side after Harry Baker sent in a shot on the turn which went wide of the mark, and it seemed that this spurred on the hosts to greater effort. The woodwork saved the Whites on 66 minutes when a cross in to thenear post found Mike Jones who toe-poked the ball against the post, and a few seconds later a long-range effort from Willmoth was easy for Beauchamp to deal with. Will Betts then took Beachamp’s place between the sticks to show what he could do at a time when Hungerford were having the better of things.He wasn’t troubled though when another familiar player, ex Supermarine Kyle Tooze, blasted the ball into the side netting from a cross.That brief storm, once survived, caused the Whites to react in turn, and as Steve Claridge said afterwards his side then showed quality at the end.

With sixteen minutes left the hard-working Baker had another effort saved, but he was instrumental in the Whites’ winner when being upended in the box by Rusby, with referee Charlie Bullock having no hesitation in pointing to the spot. Up stepped Charlie Davis who calmly planted a sweetly struck spot kick low into the corner, sending Cairney the wrong way.

Unsurprisingly, the last action of the game came from a home side in an effort to salvage a draw, and a Jordan Edwards free kick on 78 minutes found Matt Harding, who should really have done better with a free header from close in.

That was the last of the goalmouth action and although results in friendly matches have little meaning, this one, away from home and against a team from a higher level will have done confidence levels no harm whatsoever. The first half saw the Whites operate like a well oiled machine to control things and even after the disruption of changes in the second the team overcame a sterner test of a different sort to come out on top. For me, the Hungerford Chairman’s comment (at a 2m distance!) summed things up when he said that he had expected this game to be one of the toughest of pre-season for Hungerford and, pleasingly, that Salisbury were the better side on the day.

The “testometer” goes up another notch on Tuesday when Bath City, who were in contention for promotion pre-pandemic, are the visitors in what promises to be an intriguing contest. Let’s see how much safely produced, distanced, noise can be heard from up to 600 attendees! I think applause is allowed for that purpose – although the rules may have been changed by then!