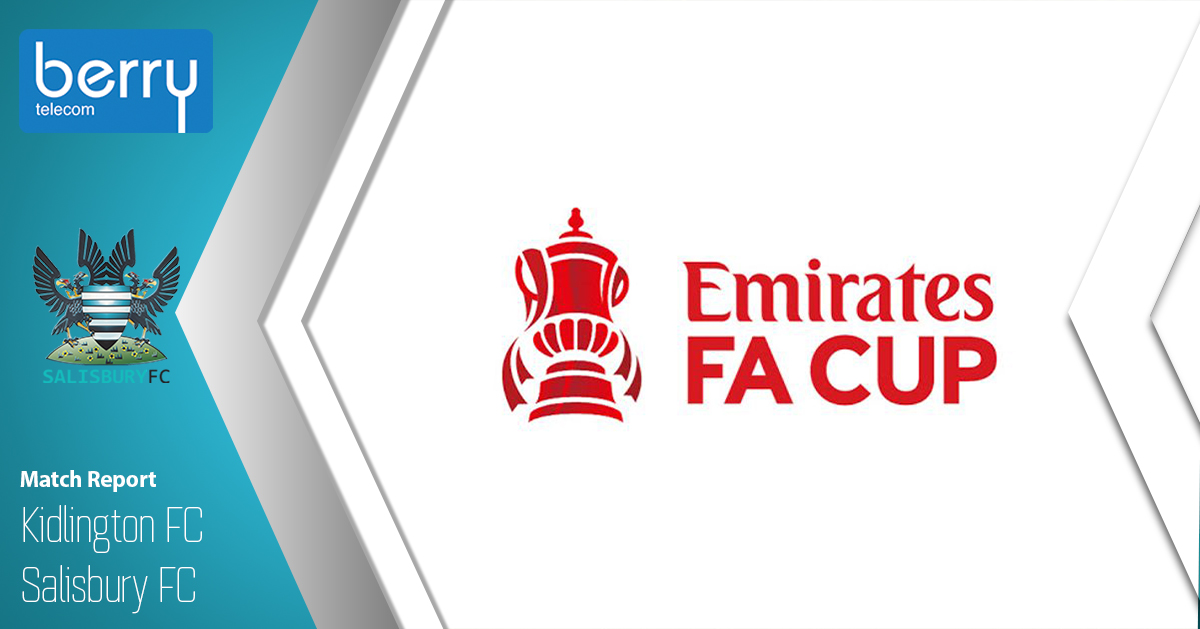 With apologies to my avid reader, I have to say that the prospect of doing the weekly grocery shopping (something I detest) suddenly became more attractive than writing about last night’s FA Cup game – hence the delay!

Firstly, congratulations to Kidlington for their efforts which kept them in the hat for the next round’s draw, and on the evening they deserved their success for their application and resilience. I’m sure that most if not all of the Salisbury travelling fans will wish them well in the next round, as I do – even f through gritted teeth!

The Salisbury lineup showed changes with Dominic Jefferies not 100% fit following an illness and Darren Mullings captaining the side in midfield. Charlie Kennedy did not join the action until just before the final whistle, having been replaced by Jack Ball, and following what looked to be an injury to Sam Roberts who had been left in a heap a few moments previously. Charlie Davis had half an hour following a calf strain suffered by Elliot Wheeler.

The first half showed little to exercise my pen apart from on three occasions, the first opportunity coming after 10 minutes, Josh Sommerton cutting inside but firing weakly.  On 34 minutes Marvin Brooks found himself clear in the left channel but disappointingly fired wide and in perhaps the most probing move of the half Lewis Benson, after a longish run across the box, saw his attempt blocked. And that was about it for the first half when although the Whites had the majority of possession nothing came of it.

The second half started in the worst possible way, the home side taking the lead on 47 minutes with Billy Gillett seeing his shot parried by Liam Armstrong into the path of Jacob Davidge who couldn’t miss.

In response, Benson got into the home box, turned, but then launched his finish over the top, and on the hour it was Kidlington’s turn when Gillett shot into the side netting when well-placed. In the latter stages Salisbury seemed to increase the pace and a Benson corner landed in the danger area. The ball being was bundled in but Sam Roberts was adjudged to have handled, although I didn’t get a clear view of that through a mass of players.

On 75 minutes a good chance came and went for Dan Fitchett, and two minutes later Harry Baker was introduced, but the only other threat from the Whites, before they scored, was a Sommerton cross which caused home keeper Christain Lawrence a minor difficulty as the ball appeared to be dipping under the bar.

We entered time added on and two minutes into that the home side were reduced to 10 men, having used all of their substitutions, when the injured Kaylem Patterson had to be assisted off the pitch, and in a last flurry, Salisbury managed to level things when Fitchett made the most of what was probably the best cross of the evening from Davis, to score with a near post header. That must have been like a knife in the back to the hosts.

It would have been understandable had their heads dropped but they managed to get the advantage of having first go at the penalties, Davidge duly converting their first. Having got Salisbury back on terms in time added, Fitchett was then the first to step up for Salisbury in the penalties lottery but only succeeded in clattering the bar with his effort. Antonio Diaz then kept the Whites in touch with a well aimed kick, before parity was restored, Kidlington’s Mark Flanagan ballooning the ball well over the top. Two more successful penalties – from Benson and Decal Peart, made it all square before Davis saw his effort saved by the keeper to give the home side the advantage which they took through Jim Glover’s spot kick, making it 4-2.

The sad night ended in penalities, the cruellest of fashions, but both sides to some extent got what they deserved, with the visitors suffering a lack of quality in important areas.Had there been extra time, I’m sure there could have been a different outcome, but in these strange circumstances it’s necessary to adapt to different rules.

The game is best forgotten, and it is on now to a tough game at Harrow Borough. Anyone who travelled to the away fixture, which turned out to be the last of last season, will remember that in a 2-2 draw every goal came from the penalty spot. I for one am sick of penalties and would like to see a goal or two scored from open play – and, of course, scored by the Whites – but that will only happen if they can shake off their by now customary slow start to campaigns.