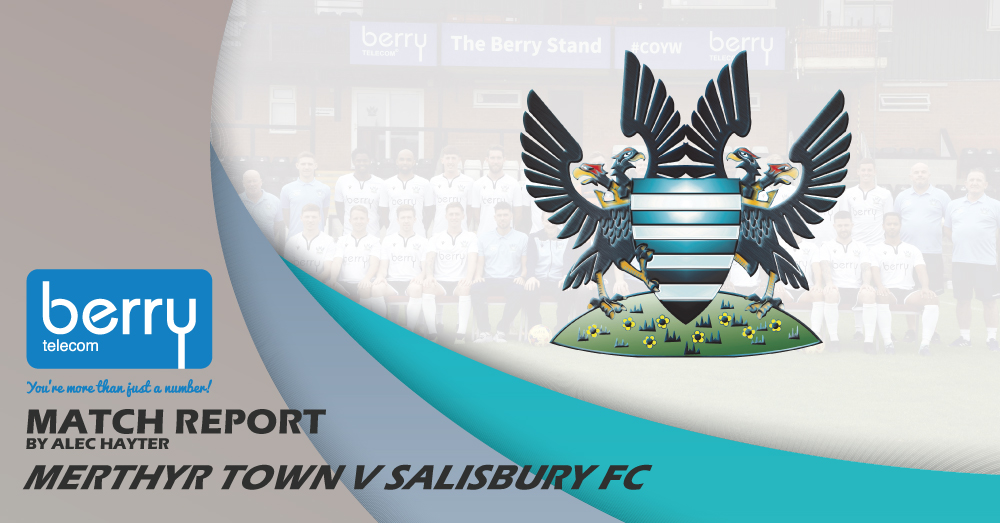 An interesting start with some quality, and an interesting end with more of the same, but not a lot in between except toil and effort, and in the Whites’ case, hanging in there to grab a valuable away point.

Merthyr is never an easy place to come – it was never that on grass in times gone by and is even more difficult nowadays on plastic where the home side have a definite advantage.

After only two minutes the Martyrs took advantage, when Elliot Richards drove a firm first time effort past Gerard Benfield from just inside the box following a low driven cross from the right. No arguments with that, the only consolation being that a goal that early affords a long time to recover.

Before a quarter of an hour had elapsed, Salisbury had responded when first Toby Holmes saw his attempt blocked when in on goal, and then on 15 minutes when new boy Amos Nasha Jnr. got to the byeline after weaving past two defenders only to see his pull back scrambled away.

Merthyr then had their turn when on 20 minutes Gethyn Hill put a near post header over the top, and they had the ball in the net seconds later, the “goal” being ruled out for offside. At the other end Holmes got on the end of a long ball, but home keeper Alexander Harris got lucky, not knowing too much about getting in the way Whites’ keeper Benfield showed he knew a lot more when he pulling off a superb save from Lee Lucas’ finish.

The Salisbury stopper again excelled when he got down well to keep out Kyle Patten’s half volley and that kept it to 1-0 at the break.

It was not until 58 minutes that another chance was produced, by Merthyr when Richards got clear, but he fired an easy chance over the top and almost down the hill out of the ground, but the introduction of Leroy Lita and Dan Fitchett on 65 minutes had the desired effect, with the former narrowly missing the target 9 minutes later.

Benfield again performed what is becoming usual for him with 5 minutes remaining, as he dealt capably with Ian Traylor’s blast from 20 yards, and that was the keeper’s last action as the Whites made their final effort.

under-cooked allowance, Lita received the ball on the edge of the box and despatched it in off the post to the delight of the good many travelling fans.

The Whites were without Aaron Dawson through illness, and earlier signed two new recruits in Amos Nasha Jnr. who started the match, and Ricardo Rees, who had a very good 35 minutes after replacing Nasha. They both acquitted themselves well especially when you consider the limited time they must have had to get to know their team-mates.

It may not have been a game of high quality, but Salisbury took a point on their travels and make it six unbeaten after what was probably a fair result, (but don’t suggest that to any Welshmen present – apart from Callum Hart that is!).

And now for Saturday against Dorchester – a little relief from League matters in the Buildbase FA Trophy. Tonight the away version Magpies took the lead at Wimborne but the home version turned things around late on to send Dorchester back to the Avenue with a 2-1 defeat. Salisbury can expect a reaction on Saturday, and hopefully the team can expect a good crowd in support.