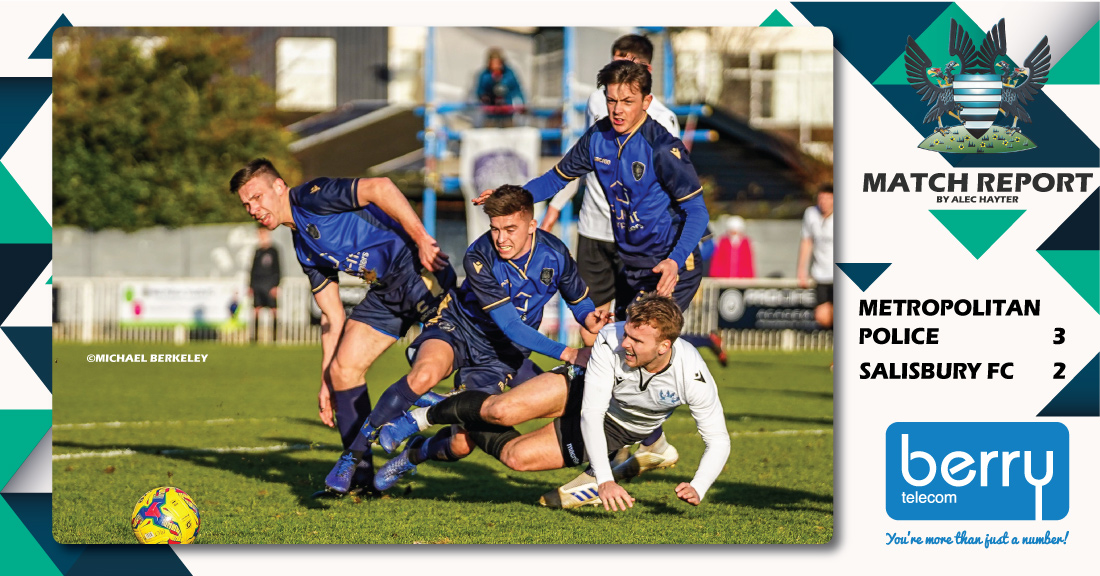 Any half decent performance by Salisbury would have been enough to bring back three points from Met Police, whose side on the day really did not reach the levels shown at Imber Court in previous seasons. That the Whites lost to their hosts says more about them on the day than the eventual 3-2 scoreline. The aim is to perform as a team, but what happened today was a collective shortfall for all but a few of those wearing the white shirt, and that was a huge letdown for their faithful who had travelled to lend their usual superb support. Hopefully the term “lend” will not be taken too literally, as at times like this any team needs all the support it can get.

The Whites cannot surely play so badly again,and whilst it is safe to assume that they have already done enough to end up at least in mid-table, on this performance any thoughts of an exciting end to the season will soon disappear. In the players’ defence however, an extra time game in a County Cup competition on Wednesday could well have had an effect on today, and thankfully not all of the other results went against them, so all is not lost.

They had the ideal start with Shaquille Hippolyte-Patrick earning a penalty in virtually their first attack. Bay Downing competently scored the opener from the spot and all seemed well, especially when shortly afterwards, Warren Bentley got to the byeline and arrowed the ball across the face of goal to Toby Holmes. Maybe the pace or awkward height of the ball was too much, but whatever the reason, Holmes conspired to miss the chance as he could not connect properly.

After seven minutes therefore it could easily have been a two-goal lead, but four minutes later, in the Met’s first threat, Jack Mazzone chested the ball back to Lewis Beale who squandered a golden opportunity by belting the ball straight at Marcus Beauchamp from close range, but it was only seconds before Mazzone took matters into his own hands when flicked into space by Beale to score his now customary goal against the Whites, with consummate ease.

From that point it was fairly even-stevens with firstly the visitors having another good opportunity when Warren Bentley sliced a header wide from 6 yards after receiving Downing’s cross, whilst on 19 minutes Mazzone’s left foot effort shaved the upright at the other end.

On 35 minutes a Lewis Benson free kick from outside the area ended up in the net only for referee Dan Simpson to disallow the goal for what he indicated as a push on a defender in the box. He obviously judged that that push cleared the way for the ball’s passage into the far corner.

So that was the first half finished, with the scores level, and in truth, not much more happened around each sides’ penalty areas until the final quarter of an hour, but when it did happen it was not exactly what travelling supporters wanted to see as Oliver Knight outpaced Nathaniel Oseni and went on to calmly slot home the Met’s second goal.

A rare incursion into the home box saw the ball cleared to Shaq who curled an effort over from the edge before, on 81 minutes, the Whites once more wasted a further chance to get the points when a Benson free kick saw keeper Rhys Forster fumble the ball in front of goal. How Owen Howe missed the target from such close range only he will know, as indeed he will also know why he incurred the referee’s wrath and received a yellow card..

With five minutes remaining Beauchamp, one of the few players to come out of the match with any credit, made a good save when Tom Cursons saw his attempt deflected by a Whites defender, but three minutes into time added Salisbury somehow got back on terms when Howe chased down a long ball and managed to toe-poke past Forster for an unlikely equaliser.

No sooner had the celebrations died down than the Met started some of their own, with Cursons grabbing their third after an almighty goalmouth scramble. It could have been even worse as, with Salisbury desperately pushing forward for an equaliser, they were caught on the break when Cursons timed his run to perfection to beat the offside trap and squared the ball to Ayoub Assal who was thus one-on-one with the Salisbury keeper. It was no surprise when contact from the keeper caused the referee to point to the spot, but it was a surprise when Assal stepped up to take the kick and put possibly one of the poorest penalties I have seen all season weakly wide of the upright. That penalty kick in itself almost summed up the quality of the game.

At the moment, there are three or maybe four teams still battling it out for playoff places, and again, at the moment, we are one of them, so all is not lost provided we can improve on the game against the Met. Although I have not carried out an in-depth analysis of remaining fixtures for those concerned, there will surely be some bumps for all to negotiate.