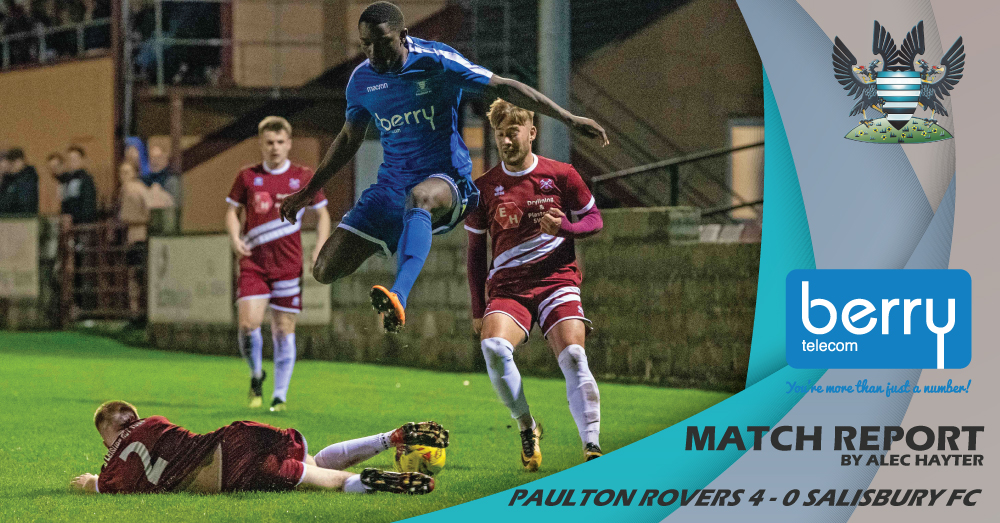 It didn’t start well when, after naming the team lineup it became known that Aaron Dawson was stuck on a train! It certainly didn’t end well as a mix and match team of individually talented players never really gelled, and succumbed to their hosts who incidentally are enjoying a tremendous start to the season in their league – and it showed!

This was a game best forgotten the sooner the better, as long as lessons are learned, before Saturday’s much more important tussle with Margate, and those few faithful souls who made the trip from Salisbury were hardly rewarded for their effort. The gate of only 97 obviously lacked much travelling input. In fact, I have more empathy with them than usual as they spent good money to get into the ground, but, because of an administrative error, so did I, even as the Press Officer!

The game was virtually over after 26 minutes, when firstly, in the first minute the Salisbury defence opened up obligingly to allow Jake Sloggett time and space to pick his spot, which he did with a low shot to Gerard Benfield’s right.

Salisbury should have evened things up 5 minutes later when Shaquille Hippolyte-Patrick fed the ball through to Toby Holmes, who was clear of the home defence and found himself with too much time one-on-one with home keeper Joseph Perry. Perhaps because of that, Holmes inexplicably passed the ball outside the post.

It looked as though the Whites were waking up though and after 10 minutes Charlie Rayfield’s cross from the right found Leroy Lita, but unfortunately it was a little high and he headed a difficult chance wide.

Salisbury were made to pay for not at least getting back on terms when, on 16 minutes, a neat move saw Paulton work the ball from their right to David Sims-Burgess in front of goal, who in turn passed to Ali Sen to drive the ball across Benfield for the second.

Once more the Whites flickered, and once more another chance was wasted at a time when the game had not yet got away from them. Hippolyte-Patrick did what he is good at, getting down the left side and crossing to the far post where Holmes again had time to aim a free header on target, but sent the ball over.

It took only a further 8 minutes for the home side to establish a commanding lead, and again, it was a goal conceded in disappointing circumstances. Sims-Burgess found himself on the edge of the box with a defender and the onrushing Benfield to contend with, but the keeper would probably reflect that he should have stayed put in his 6 yard box, as with remarkable calm the Paulton man dinked the ball over him and into the empty net. That, thankfully, was all of the first half goalmouth action, and it could be summed up as Paulton – 4 or 5 attempts and 3 goals, and Whites – 3 attempts with nothing to show.

Any hope that the half-time talk would change things was soon dispelled early in the second period when Edward Butcher firstly sent a low shot just past the post on 46 minutes, and then 8 minutes later hit a superb volley, but just high from easily created openings.

Our photographer Michael Berkeley was stationed near the goal Salisbury were attacking, getting soaked, and would have needed a long lens for most of the game to attempt to catch any action, but his patience was rewarded on 70 minutes when Charlie Rayfield of all people managed to test home keeper Perry with a firm drive. The keeper won that contest, and it was creditable that Salisbury managed the chance at all because shortly beforehand Elliot Wheeler suffered a second yellow card, which many considered should have been his first, with the inevitable consequence of receiving red.

Paulton were in no mood to ease up and on 75 minutes Butcher was presented with an open net, which received the ball for the fourth goal. On 80 minutes Benfield was forced to show what he could do as he got down well to keep out a rasping drive from Ryan Gay, and it was not until two minutes after that Lita made his best contribution of the evening, sending in a 25 yard right foot shot which was tipped over the bar.

Unsurprisingly it was Paulton who, with a man advantage, finished the stronger, and only the woodwork prevented a fifth goal just before the final whistle.

It might be understandable, although not forgiveable, that minds were elsewhere for this game and there is a perception that the league cup is not taken too seriously by some. However, Steve Claridge will have wanted to get as far as possible in this competition, but it was not to be. It is very doubtful that the team on parade and its lineup will be the one employed for Saturday’s game. Unfortunately this team never seemed to be together, and I suppose therefore could not be accused of falling apart!

I’ve said before that maybe the best time to watch the Whites is after a poor performance – and saying that is in no way intended to take anything away from a Paulton Rovers side who deserved their victory – which means that Saturday’s game should be nothing less than unmissable! None of the Salisbury players will have gone on to the pitch with any kind of death wish, and they will want to put matters right as many will be disappointed with their contributions.

They will certainly need your support to do so and a big crowd getting behind them will ensure that Margate learn what it’s like to be on the end of a defeat at the Ray Mac. Saturday’s game must rank as one of the biggest in our new club’s short history, so put this one behind you and be there – after all, it could have been worse (if you are also a Spurs fan!).