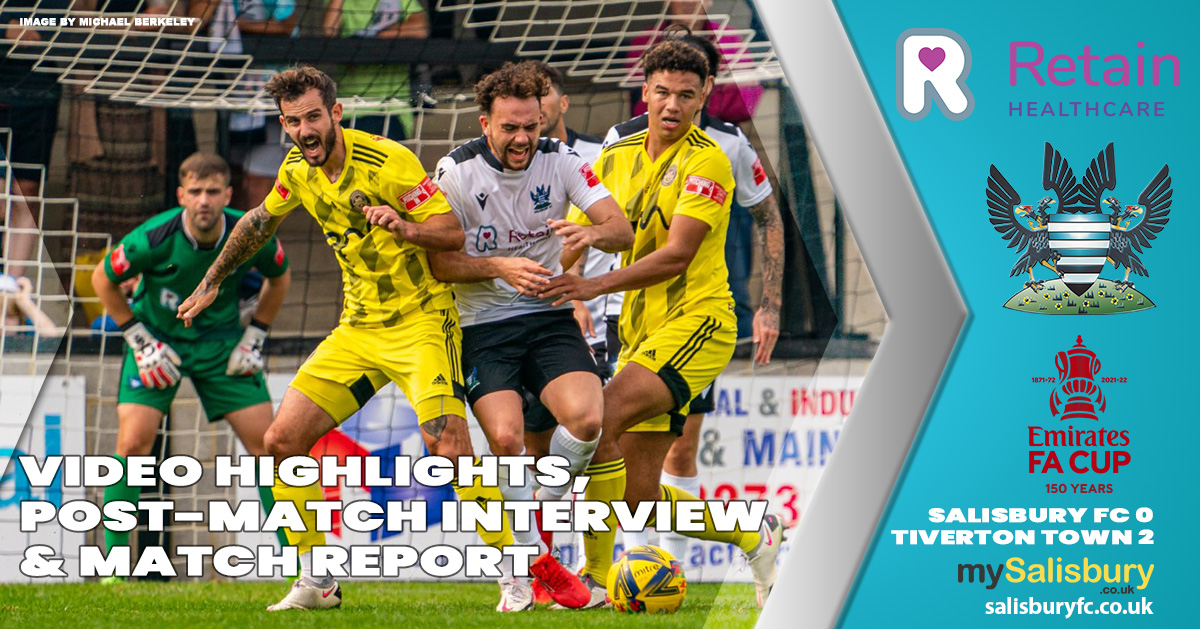 By Andy Munns of MySalisbury

Salisbury FC has crashed out of the FA Cup to Tiverton Town at the Ray Mac this afternoon.

The first half saw very little real action for either keeper. The 399 in attendance had to wait until the 32nd minute until Salisbury produced the only shot on target in the first half. Thomas Blair broke through midfield drifting left as he carried the ball forward and into the box. His left-footed shot though was beaten away by Williams in the Tiverton goal.

The game on the whole was lacking much in the way of creative flair and clear-cut opportunities. The first half was a tetchy attritional battle that came to head on the 36th minute when Salisbury were reduced to ten men with the sending off of Thomas Blair.

Blair carried the ball through midfield and then overran the ball. Stretching for the ball after a heavy touch he followed through on Tiverton captain Aaron Dawson, catching him just above the ankle and referee Marc Whaley had no hesitation in showing the Salisbury wide man a straight red card.

Level and goalless at half time was a fair reflection of a fairly dour but testy first half.

The second half started brightly for the home side. Salisbury had a penalty appeal waved away by Whaley as the ball struck the arm of a Tiverton defender. The ball came from close range and there was no deliberate movement of the arm toward the ball.

Salisbury then created the first real chance of the second half when on the 52nd minute, Charlie Davis curled a shot from the edge of the box just over.

Five minutes later, Salisbury could have taken the lead. Marvin Brooks beat the offside trap and found himself through on the keeper after a well-weighted through ball. Unfortunately, he lost his footing as he attempted to round the keeper and Williams in the Tiverton net was able to gather at his feet.

It was Tiverton’s turn next to squander a golden opportunity to take the lead when former White’s striker Matt Wright inexplicably volleyed over a glorious chance just a minute later. Tiverton broke after the Brooks chance and the ball was crossed into the box. The ball was flicked on and dropped for Wright who couldn’t find the target with the goal gaping and his volley went high and wide.

The chances kept coming for Tiverton as they looked to take advantage of the extra man. This time Marcus Beauchamp produced an outstanding save to prevent the ball finding the back of the net. The White’s keeper somehow pulling off a save that looked destined for the back of the net, the Tiverton supporters behind the goal had already started to celebrate when out shot the left hand of the Salisbury stopper and diverted the ball away.

Wright eventually did get on the score sheet. A long ball carried over the head of the despairing Ben Starr and found the feet of the onrushing Joe Belsten to put the ball across the box for Wright to strike. The Tiverton front man stroking into the middle of the goal after 83 minutes.

Tiverton then put the game beyond Salisbury when Olaf Koszela got their second heading home from a corner into the left-hand side of the goal on 88 minutes.

The game was a poor one and the majority of the 399 will go home disappointed as Tiverton progress in the cup.