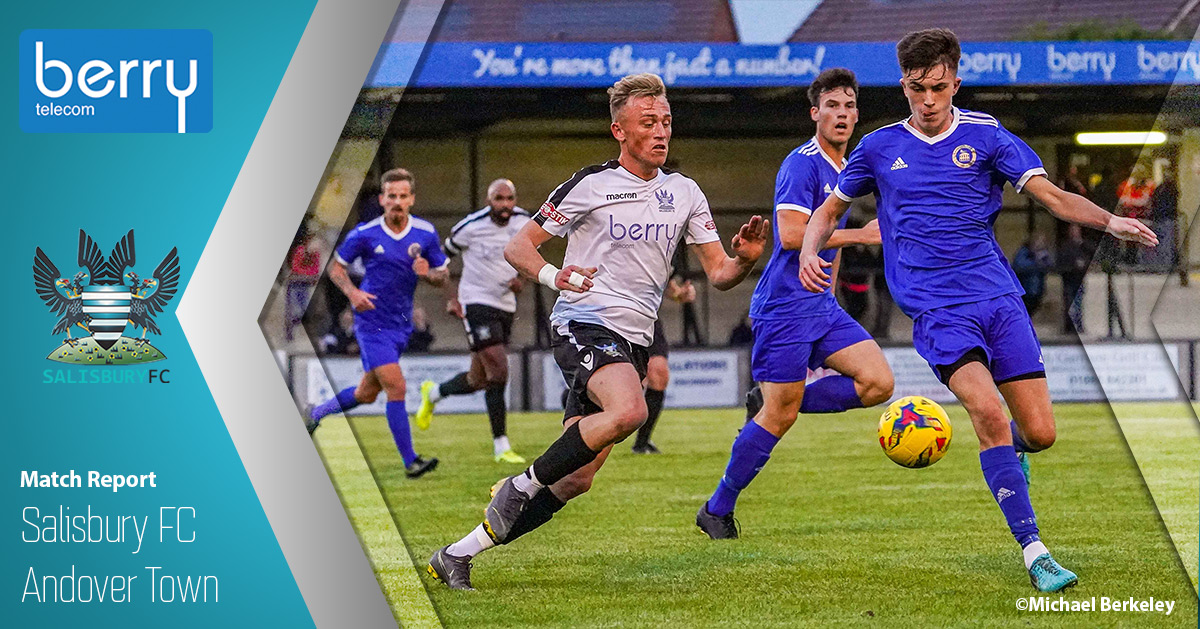 It was good to welcome back fans into the well-managed and safe environment of the Ray Mac, and in an evening where they could show their support in more than one important way they took every opportunity to do so, from an attendance of just short of the maximum permissible, (and that for a pre-season friendly!), to a 50-50 draw which amassed £290, with one lucky winner going home with £145, to showing their appreciation to the players – and receiving it back the end of the 90 minutes. This was an all-round success which bodes well for the upcoming friendly matches which should provide a sterner tests for the Whites.

Manager Steve Claridge’s comment after the game that although in the friendlies the opposition have been from a lower level, they had all shown good organisation and therefore posed different challenges for his players, and Andover Town were no exception in that they were also a well-drilled outfit and a credit to their league. All opponents, he said, had been difficult to play against.

Not helping on the evening were strong winds which did not aid efforts to play good football, although both teams made every attempt to do so. In spite of that fans were treated to three goals, two more in a 45-minute appearance from Harry Baker and one blistering finish from Lewis Benson late on.

It was Lewis who had the first attempt on goal, when on seven minutes he sent a cross- shot narrowly wide of the target. Seven minutes later Charlie Davis saw his long-range effort suffer the same fate, before, shortly afterwards Andover had a real chance when the ball ricocheted to the impressive Morgan Browning in front of goal, but he could only toe poke goalwards under pressure.

On 23 minutes Charlie Kennedy released Baker for the striker’s first goal, calmly placing his finish past advancing keeper Ben Rodwell, and 11 minutes later the lead doubled when Baker chased down a ball through the middle, resisted a challenge, and rounded the keeper to score with ease.

The visitors nearly profited from a misjudgement six minutes before the break when Marcus Beauchamp came for a swirling Owen Trapnell freekick but was beaten to the ball by Ethan Kelly, who was unlucky to see his header clatter the upright. That was the last real threat on the home goal and before the break Antonio Diaz lofted a freekick from the edge of the box just over the top, with the impressive Josh Sommerton almost weaving his way through all of the Andover defence before the referee blew for half time.

As is usual for the friendly matches multiple changes were made at the break and one new entrant, Warren Bentley, sent in a low cross where another, Dan Fitchett missed a sharp chance at the near post, under pressure and the close attentions of defenders.

On 66 minutes, Benson, who had rejoined the action for the injured Davis sent a wild effort over the top before, eight minutes later, Diego Romero, not for the first time, got to the byeline and provided an inviting if very firm pullback which Fitchett could not control and finish.

Salisbury’s third goal came on 76 minutes when a move involving Owen Taylor and Bentley saw the latter lay the ball back to Benson whose firm finish found the corner of the net to make it 3-0.

Two further chances created by Romero provided Fitchett with openings but in each case the striker’s attempts were blocked on the way to goal, a Benson freekick in time added from the edge of the box struck the bar with Rodwell beaten – good memory for the fans!

Another good workout and another win, but the match on Saturday at Vanarama South Hungerford Town should provide a stiffer test than all of the friendly matches so far. That match represents higher opposition standards and thetrend will continue with the visit of Bath City and Eastleigh finish off the home friendly matches. Having successfully negotiated the precautions put in place at the Stadium against Andover it should be possible to proceed to Stage II and admit up to 600 spectators for each of the remaining home games.