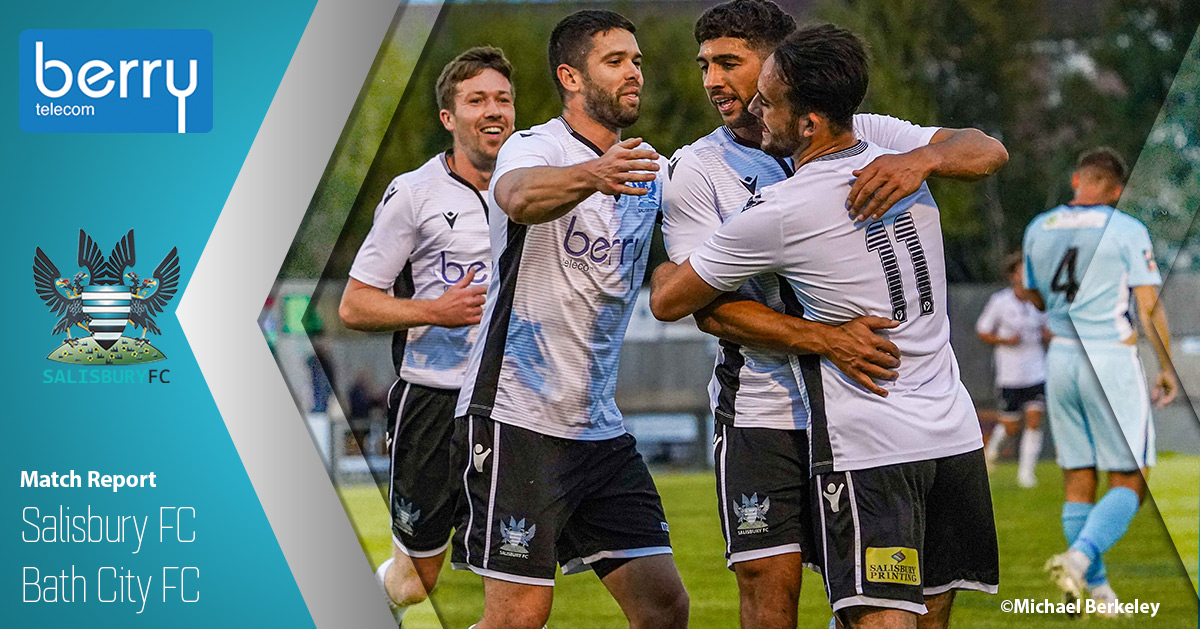 Judging by the last two friendlies, which have seen the Whites face Vanarama South opposition, for Salisbury it is not a case of when the going gets tough, the tough get going, but more one of when the opponents become more difficult, the Whites raise their standards!

A creditable 1-1 draw with City means that so far Salisbury are unbeaten in friendly matches and as the standard rises more will be learned about the talents of Steve Claridge’s squad. In fairness to our visitors it was their first outing and they will no doubt have been pleased for the workout and for the fact that they were involved in a good football match played in a good competitive spirit.

The evening saw the first appearance of Marvin Brooks as a Salisbury player, the midfielder having signed forms before the start of the game, and it was easy to see where his value will lie in our setup as he was very much involved in the first half, looked strong, and had a hand in Salisbury’s goal.

That opener came as the first real action in a lively start by both sides on 13 minutes, courtesy of a tremendous strike by Antonio Diaz. The ball had been played forward by Sam Roberts, received by Brooks, and passed to Dan Fitchett, from whom it found its way out to Diaz who, from just outside the box, curled a superb shot in off the crossbar. Being right behind the flight of the ball, it appeared to be a goal as soon as it left the boot, and not even ex-Salisbury favourite Ryan Clarke could keep that one out! It’s maybe a bit too early to talk about the goal of the season, but it’s a good start!

Had a second goal arrived then maybe another win could have been added to the record, and on 29 minutes Clarke appeared to be struggling to get near a vicious 25 yard Lewis Benson freekick which dipped narrowly over his crossbar. A little lower and it could easily have been 2-0, a possibly decisive margin.

On 37 minutes Brooks’ crossfield ball found Diaz free on the left but this time his left foot let him down, with the ball flying harmlessly over the top.

So, at that point and in fact until two minutes before the break, the Whites had dominated their Conference opponents, but the mood changed on 43 minutes when Marcus Beauchamp came miles off his line to intercept a ball which cannoned to an unnamed Bath trialist who will have done his cause no harm by firing into an empty net from distance.

Thus at half time it may have been a question of “heads down” in the Salisbury dressing room but after the interval the Whites gradually regained their composure. However, the visitors also upped their game and although they produced nothing to really test the Whites’ rearguard, they did enjoy the majority of possession for much of the second half.

With 10 minutes remaining however, Salisbury might well have snatched a winner when firstly Diego Romero sent in a cross-cum-shot which forced an unknown trialist* keeper  to touch the ball over the bar.

*(I have a pet dislike when reporting friendly matches……… guess what!)

CLUE these two are NOT trialists, and Elliot IS making up for lost time through his long absence out injured, whilst Josh is NOT showboating! ©Michael Berkeley

Two minutes later a Charlie Davis delivery gave Charlie Kennedy an opportunity, but his firm contact went past the upright.

A third opportunity, and perhaps the best falling to either side in the second half, came straight afterwards when Romero was presented with the ball inside the Bath half. In ample space the youngster moved forward but was off target with his finish.

As with the game at Hungerford, the second half provided different challenges, but again the squad came through, although they may all have suffered some disappointment in tonight’s result because of what might have been. However, the signs are very good and it’s not every day that you get to play against Vanarama South opposition!

I regret that I will have to miss the game at Sholing on Saturday, but very much look forward to the one against Eastleigh the following week, which should provide the climax to a steady progression and increasing standards in the friendly matches. Again, up to 600 are allowed to attend and an expected following from our near neighbours should see that figure reached, so book your tickets online as soon as you can (to avoid disappointment, as they say).