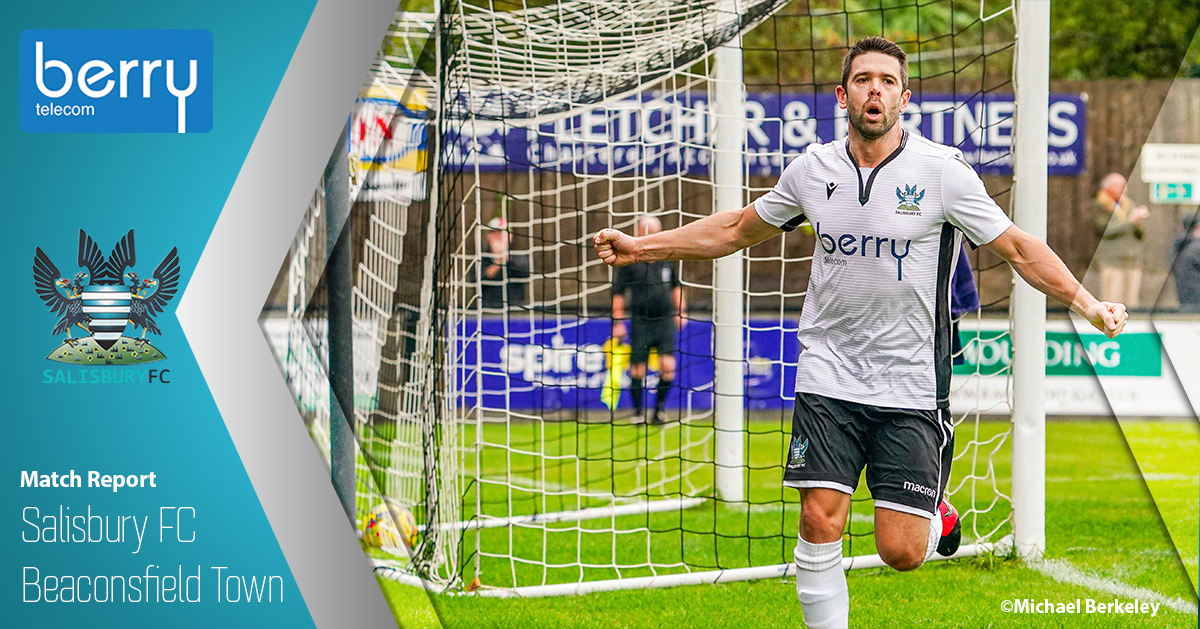 The Whites overcame a stubborn Beaconsfield side despite being only able to name three substitutes following injuries, and the loss of the influential Antonio Diaz late on, but three points was a rightful reward taking the game as a whole, and those points were everything considering the circumstances.

There were some notable firsts – this was Salisbury’s first home win – and, as we know from previous seasons, that has often been difficult to achieve in the early stages. In addition, Dan Fitchett got his name on the scoresheet for the first time as a just return for the hard work which he normally puts in for the team, but an added bonus was keeping a clean sheet. Beaconsfield, although losing their opening games, may well have more to offer and it is easy to see how they could cause other teams trouble bearing in mind their sheer physical presence on the pitch.

One of the battles was between the experienced and much travelled Jefferson Louis and Sam Roberts, and it was Roberts who came out on top against an awkward opponent, with the rest of the defence looking secure, apart from one or two occasions when Liam Armstrong in goal had to do his bit. That in itself will have helped the keeper’s confidence, as for long periods of the game he was not involved but was able to effectively do his job on the rare occasions he was called upon. Salisbury could well have won this game by a bigger margin, but a combination of good goalkeeping from Beaconsfield’s Adam Forster, some bad luck, and some late profligacy in front of goal saw to it that the only time the net was troubled was when Fitchett got the winner on 26 minutes.

In spite of loud Beaconsfield appeals referee Graham Pearce waved away a penalty shout early on when Roberts appeared to fall on the ball in the area, but a sensible interpretation of the current law denied the visitors a chance from the spot, and it was the Whites who then responded when Lewis Benson delivered a great cross to Antonio Diaz who unfortunately could not get enough on his header to trouble the keeper. On 15 minutes another Benson cross, this time to Marvin Brooks, saw Brooks slice his header wide of the upright. Those were two good chances in the first quarter of an hour before it was the visitors’ turn when the lively James Ewington cut in before sending a right foot effort narrowly wide.

Salisbury resumed their attacking habits and on 18 minutes Diaz touched the ball back to Dominic Jefferies who hit a firm drive from the edge of the box off target, and seven minutes later Jefferies returned the favour with a great ball to Diaz on the left. A good cross was met by Fitchett for a difficult headed chance which went over, on 25 minutes, but the reward for the Whites’ dominance came a minute later with Diaz surging forward before slipping a delightful reverse ball to Fitchett. The striker got his ahot away in spite of a defender’s challenge and nutmegged the keeper for good measure to open the scoring.

The Whites continued to press and on 34 minutes a long ball found Charlie Davis on the right whose cross reached Brooks. A first-time right foot finish, which, had it gone in would have rounded off a quick-fire move, only brought the best from Forster as he somehow managed to touch the ball over the bar.

Diaz was again involved a minute later when he put in Charlie Kennedy who was foiled in a one-on-one by Forster and four minutes before the break Jack Ball got well forward and saw his powerful cross shot diverted by the keeper past the upright.

A scoreline of 1-0 was something of a travesty at half-time as the visitors had only produced one threat on goal, but after the break they had their second chance when Ewington got clear only to see Armstrong deny him in a one-on-one.

At the other end, just after the hour, Benson tried a trademark freekick from just outside the box, but it hardly troubled the keeper, before three minutes later the Salisbury midfielder sent in a freekick which found Brooks, whose bullet header whistled past the upright.

A third Beaconsfield chance came to Ewington when he chased down a long ball before testing Armstrong on 70 minutes, and the same player then had a cross shot which went wide of the far post. That was the last we saw of the visitors’ attack as Salisbury completed the game the stronger, although Diaz had to leave the action with an injury after having soldiered on for some time. He was replaced by Darren Mullings who with his colleagues got the job done. Warren Bentley, on for Fitchett in the Whites’ only other substitution, put in Brooks, but Forster made a great block in another one-on-one, and on 80 minutes Benson dribbled along the edge of the box from the left before forcing the keeper to make a great save at full stretch.

On 89 minutes Brooks picked up the ball inside the Beaconsfield half and moved forward but blazed his finish over the top and into time added Bentley beat his defender but unfortunately did the same. Right at the death the visitors wasted their final half-chance when a cross found Callum Webb who headed over the top from 15 yards.

This was in some ways a strange game but one in which the Whites came through without really ever firing on all cylinders, although of course some of the cylinders were not there from the start because of injuries. Beaconsfield did their best to make life difficult but can really have no arguments over the outcome.

The Whites now face two difficult tests with a visit to Taunton Town on Tuesday and then another home game with local rivals Poole Town next Saturday. Taunton warmed up for the game with a 5-3 FA Cup victory at Tiverton Town, whilst Poole were knocked out by Chippenham Town after having made a great effort level the score at 2-2 and send the match into penalties, which they lost by 5-4. Two good victories from our next two opponents only serve to emphasise the difficulty of the next week’s fixtures, and whilst it may be difficult for some supporters to get to Taunton on Tuesday evening, an attendance pushing the 600 limit would help the team against the Dolphins.