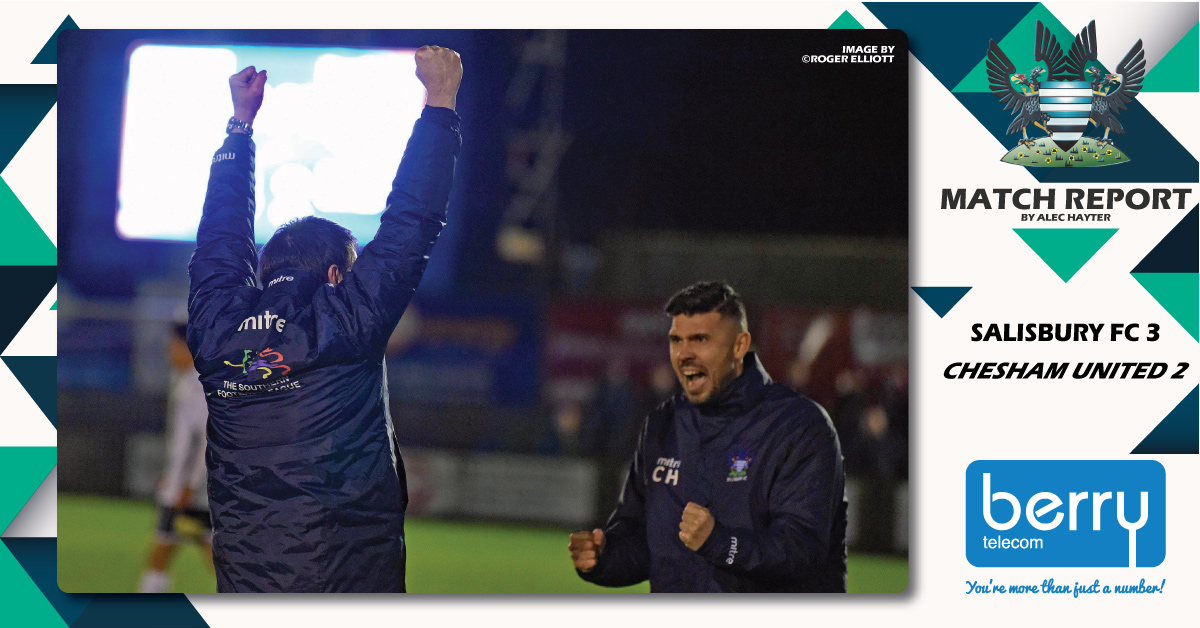 Manager Steve Claridge was, strangely, slightly subdued after a superb 3 point haul, saying “Next time we go two up, I think I’m going to tell the lads to score two own goals, so that we’ll be sure to go on and win it!”  I detected a slight smile on his face!

There should really have been a smile on the faces of the majority of the crowd after a scintillating match which swung from side to side, but in the end, for most ended up on the right side. Chesham have made tremendous progress since the meeting between the clubs on the opening day of the season and are an extremely competent and competitive side, not lacking in skill either. They came to the Ray Mac on a run of four matches unbeaten in all competitions, and during that time had conceded only three times, but had also knocked Walton for six at their place on Boxing Day.

After a cagey start from both sides, the visitors had the first effort on goal when Billy Adcock’s attempt went just the wrong side of the upright on 11 minutes, but Salisbury were unlucky not to take the lead shortly afterwards when a Toby Holmes header was cleared off the line by Steve Brown.

It was though Salisbury who went ahead on 22 minutes, after, for the first time in the match, they had subjected the Generals’ defence to sustained pressure, and after Shaquille Hippolyte-Patrick and Owen Howe had combined in an attack, a panicky clearance saw the ball fall to Ollie Knowles just outside the box. The midfielder dispatched a superb left foot finish past keeper Ben Goode to give his side the lead.

As would be expected, Chesham hit back and if it had not been for a superb last-ditch block from Nathaniel Oseni they would have equalised when a great move left Eoin Casey in space, and close in. Chesham then exerted more pressure and it took two goal-line clearances from Lewis Benson to maintain the slender lead at the break.

After the interval it was Salisbury who showed first when Howe threaded the ball through to Bay Downing but Goode came to the Generals’ rescue, racing off his line to deny the Salisbury man..

Just after the hour the Whites doubled their advantage from a breakaway which was swift in execution, Toby Holmes and Shaq swapping passes before Shaq delivered a great cross to the far post where Holmes had made up the ground to enable him to powerfully head the ball past the keeper.

A two goal advantage should have set up a more comfortable end to the game than actually occurred. It was only four minutes before Chesham got a goal back to set the nerves on edge, and was a simple, but from Salisbury’s point of view, disappointing goal to concede, as it came from a set piece wide on the left, with Casey somehow getting to the ball first in a crowded six yard box to head in.

Worse was to follow as 8 minutes later Kevin Amankwaah, in a chase with Karl Oliyide, was out-muscled (difficult to achieve against KA, although there was a suspicion of a foul in the challenge), for the powerful striker to calmly place the ball past Liam Armstrong for the equaliser.

It is never wise to write off the Whites at home, however, or anywhere for that matter, and they came forward once again. Shaq took on his man along the byeline, but was brought down and the referee correctly pointed to the penalty spot.

Once more the responsibility for taking an important kick was happily accepted by Bay Downing who kept his run going. Four in four is his success rate and this one turned out to be the winning goal to seal an extremely hard earned three points.

Just before the end Dan Fitchett was unlucky to see his fierce drive deflected narrowly over the bar on 80 minutes, but, at the other end the bar did its job in keeping out a cross from Zak Joseph in the dying embers of the game.

There were five goals, along with some great entertainment, in a game the outcome of which was never easy to predict. As with our Boxing Day game, the crowd, although the highest on the day in the league and one which would be the envy of many clubs, was in context quite disappointing as this was obviously going to be an epic battle between two good teams. Those who missed this game missed an absolute treat.

For more good entertainment, which is virtually guaranteed in the “winner takes all” FA Trophy game on Tuesday against Eastbourne, please come along and support your team in their efforts to get through to the next round and make the trip to Chelmsford City next Saturday. Today’s spirited performance and success merits more like 800 spectators at home games, (why not on Tuesday?) although it might be a tad unrealistic to expect that number to travel either to Chelmsford or, if we must, to Gosport next Saturday!

Subs not used: B. Brown, Kirby.