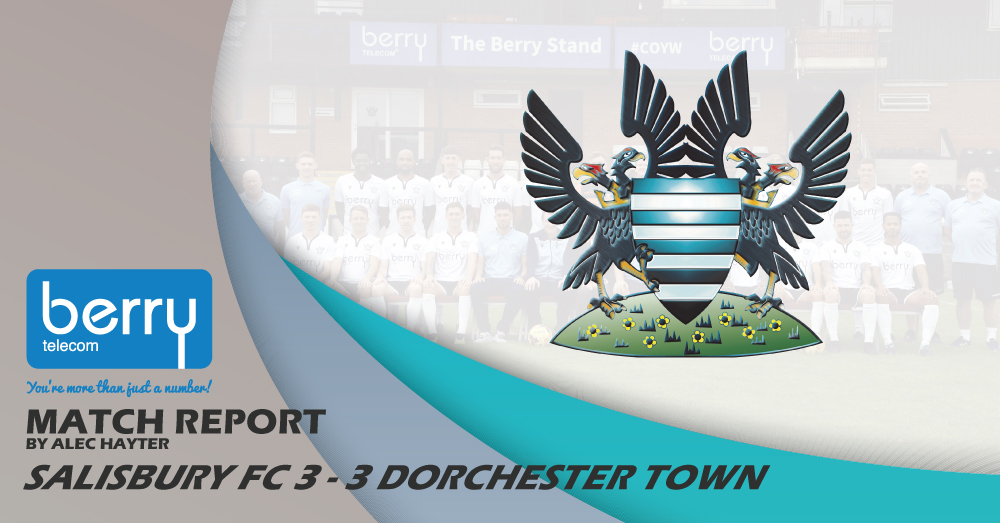 The first minute or so was a great start for the Whites, but the next minute really set the scene. Anyone who came late would possibly have missed a chance at the Dorchester end and also the opening goal by Tom Bath the chance for which which was more or less presented to him 6 yards out and which he gleefully accepted. For the second time in a few days therefore, Salisbury had fallen behind at a very early stage of a game, but, as before, they managed to earn parity by the end of it.

That’s an oversimplification, because of course another 5 goals followed! It took another 7 minutes before a second threat was produced on the visitors’ goal and came from a Lewis Benson free kick which Leroy Lita, with his back to goal, headed over the bar. Not to be outdone, the Magpies went to the other end where the woodwork saved the Whites’ blushes from a Bath attempt, and then when Tom Parrington’s inaccuracy sent the rebound high.

On 14 minutes Dorchester had another double chance when Antonio Diaz saw his effort saved and again the rebound was put over the top, this time by Billy Lowes, but Salisbury responded when a great cross from Bay Downing flew just beyond Lita in front of goal, and on 19 minutes when Alex Lafleur went on a run and beat a couple defenders before a tame finish made life easy for Dorchester keeper Shane Murphy.

On 35 Gerard Benfield had his first serious action when he managed to get to a Tom Blair finish, and before the interval Salisbury had perhaps their best chance of the half when Lita put in Fitchett one-on-one with the keeper, but instead of the net bulging, once more the ball cleared the bar, and so at the break there was a one goal deficit causing Steve Claridge to make a change and introduce Toby Holmes for Lita.

The lanky striker was soon in action but could only fire an attempt at Murphy and then on 49 minutes overran the ball when in a good position manufactured by Fitchett’s flick.

The Whites seemed to be waking from their slumbers and Holmes was unlucky when Murphy blocked his finish in a one-on-one before Shaquille Hippolyte Patrick suffered the same fate from the rebound, but on 53 minutes the equaliser arrived, Lafleur sending in a good cross to the near post where Fitchett was quickest to react, nearly breaking the frame of the goal as the ball entered the net.

The euphoria of having grabbed the equaliser was soon dampened however when Nathanial Oseni he tripped Purrington in the box right in front of referee Craig Scriven, giving Bath the chance to get his second. A well-placed spot kick sent Benfield the wrong way.

So it was back to where we had been for most of the first half, and Dorchester might have doubled their lead on 63 minutes but Purrington put his header high, before 8 minutes later, the effect of that miss was compounded when Salisbury equalised. In the teeth of a howling gale, Downing received the ball wide on the right and his low drive across Murphy was struck well enough to defeat the keeper.

On 74 minutes it was Dorchester’s turn to profit from the woodwork as Holmes pulled the ball back to Fitchett, before, with 9 minutes left, a move involving Benson and Downing resulted in a low cross which Fitchett put the wrong side of the near post.

The game had been end to end and as the Whites pressed for a winner they were caught on the break with a long ball out of defence finding Blair, who calmly placed a shot into the far corner to give his side what they may have considered to be a late winning lead. However, as on Tuesday at Merthyr, the Whites showed they don’t give up easily and sheer pressure involving Benson and Warren Bentley gave Holmes the half chance he needed to tie up the scores at 3-3, but in context with what had gone previously, it was Benfield who kept the score that way when 6 minutes into time added on, he somehow kept out a Blair header to earn his side a game in Dorset on Tuesday.

After an initial period when the Magpies could have sewn up the game, Salisbury, in turn, had enough chances to win their way into the draw, but there was never any certainty of the final outcome. If Salisbury perform as we know they can however, then maybe the relative league positions will be reflected in the result of the replay, but they will have to do that in order to make progress.