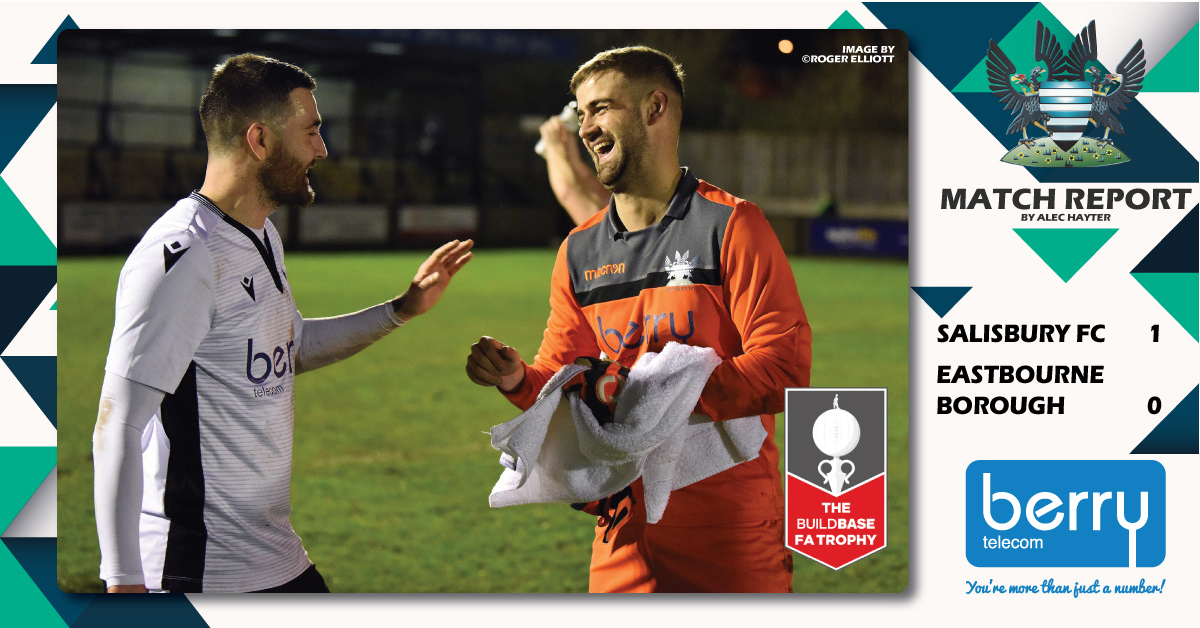 Before this game the most worrying thing for me was to hear at 6-30 pm that the Shaftesbury/Bemerton Heath Harlequins game had been called off because of fog, and there was a strong wind from the West, but thankfully that weather system did not arrive at the Ray Mac. What did arrive after the 90+ minutes was the valuable prize money, and the right to make the trip to Chelmsford City on Saturday for yet another tough test of the Whites’ credentials.

A very hard match on Saturday was followed by last night’s contest which was, although not as entertaining, in many ways just as hard against higher level opposition, and as has been said many times before, in cup games the result is paramount.

That Salisbury are competing at Chelmsford on Saturday is down to a gutsy spirited performance by the whole team, but in particular to superb input from goalkeeper Marcus Beauchamp who, at crucial times, single-handedly defined the result. That’s not to take anything away from the efforts of the rest however, and the tireless Dan Fitchett grabbed the all-important goal at exactly the right time to send us through.

Because of injuries and players being cup tied the Whites were only able to name a bench with three players, with two of these being used to very good effect.

Fitchett had the first chance after only 3 minutes when Lewis Benson’s free-kick found him in space in front of goal. Unfortunately he could not get sufficient purchase on his header, and this was a let off for the visitors. They, in their turn were unlucky 3 minutes later when a cross from their left saw a striker’s effort hit the foot of the post.

On 33 minutes Shaquille Hippolyte-Patrick cut across the edge of the box, and his finish was just a little further the wrong side of the post than Eastbourne’s earlier attempt, and a few seconds later Dean Cox sent in a rising drive which hardly troubled Beauchamp. It was developing into another end-to-end contest and it was Salisbury’s turn on 37 minutes when Benson’s freekick was deflected off of a defender and fell sharply to Jake Wannell in front of goal. Unfortunately it was too sharp a chance for him and he put his header over the bar.

After that it was back to the other end, where the best chance of the match so far fell to the Sports after Greg Luer got around Beauchamp in a one-on-one, but the unflappable Tom Leak foiled Nicky Wheeler with a last-ditch tackle just in front of goal. Stung by this, before the referee blew for half time Benson sent in a wicked free-kick which was so awkward, bouncing in front of visiting keeper Scott Chalmer Stevens, that he could only scoop the ball up off the turf and over the bar. It was a great save, especially at that moment.

The Whites produced early chances in the second period and Bay Downing was very unlucky to see an acrobatic overhead go narrowly over the bar on 50 minutes. Five minutes later Shaq launched his attempt under pressure well over the top from the edge of the box, but from a much easier opportunity.

Again in this seesaw affair, on 57 minutes Eastbourne nearly struck when Wheeler’s cross shot was deflected, looping in the air before Beauchamp produced a superb save.

Salisbury’s turn again, with a reply when Benson curled a free-kick just past the upright with the keeper beaten, and with 30 minutes left Danny Young got to the byeline and pulled the ball back across the box for Toby Holmes, who was denied by a swift intervention from a defender.

A couple of moments later, as the Sports came forward Beauchamp excelled himself with two great stops in the space of 30 seconds, firstly from Charlie Walker and then Mike West.A further 6 minutes passed before Beauchamp completed his last action of the match, this time denying Walker’s cross shot, and probably convincing the visitors that they had seen enough of him over the two games.

Again, this was a match which could easily have gone either way, but, yet again, the Whites found the will to win, and they must now carry that spirit and endeavour into the game in Essex on Saturday. There is no doubt that that will be the intention, as of course in these games you only get one or maybe sometimes two chances.

Whatever transpires, supporters can be sure that their team will do their utmost to succeed, although once more away from home against higher standard opposition currently lying in ninth position in the Vanarama National League South. I hope that a lot of you will be there to support their efforts.