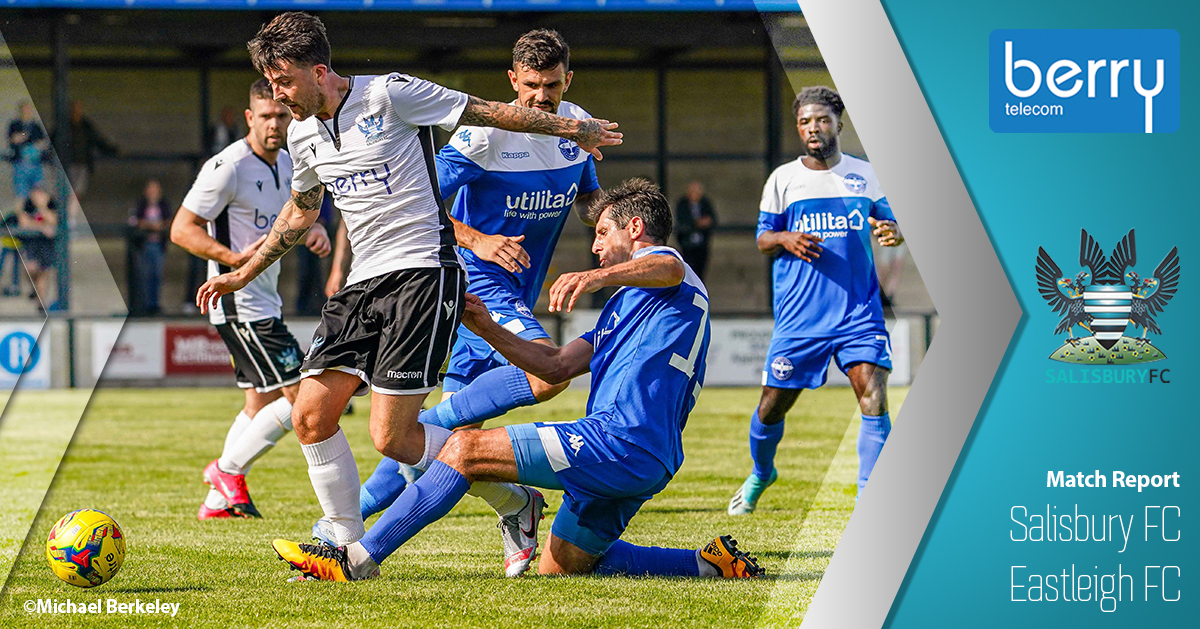 Salisbury fans would be well advised to put to the back of their minds the friendly matches as a whole which preceded this one, as, against Vanarama National opposition in Eastleigh a real test was witnessed. A good performance and result gained, which the Whites may not necessarily have expected nevertheless materialised, and in some style. With the league season just one week away things are getting serious and a competent showing, especially in the first half, banished memories of Sholing and Bemerton, and in a different sort of way maybe put a different interpretation on all the other pre-season action too.

It was good to see the return of goalkeeper Liam Armstrong and in a first half which the home side dominated his only action was in barking orders, (a very welcome noise!), gathering one cross, and diving to deflect another to safety. That should illustrate how comfortable the Whites were.

Liam Armstrong – commanding, and did the biz when needed – ©Michael Berkeley

After a quarter of an hour, they produced the first opportunity, Antonio Diaz testing Joe McDonnell with a cross-shot, with Dan Fitchett having to watch although he may have been in a better position to capitalise on the chance. Three minutes later a chipped cross by Ollie Knowles gave Marvin Brooks the chance to demonstrate his potential value to the Salisbury side when he bravely got to the ball before the keeper with not so much as a glance at the keeper or concern for a possible clattering. Unfortunately, the ball went just over the top but he was again in effective action shortly afterwards. On 24 minutes Elliot Wheeler squared the ball to the corner of the box where Brooks’ snapshot caught the keeper unawares but whistled the wrong side of the post.

The reward for Salisbury’s efforts came just after the half-hour when Josh Sommerton did well to retain the ball in a forward position before delivering an inviting cross into the box where Brooks rose to power home a header and give his side a well-earned lead.

The Whites had had a great first 45 minutes and, as is the case with most friendly matches multiple personnel changes were made at the break, with Salisbury using six of their eight substitutes in one go.

The new lineup resisted an enlivened Spitfires side until just after the hour, and will possibly be disappointed in the way the equaliser was conceded. Eastleigh’s Dan Smith, in space, had time to slip the ball to Ben House, in even more space, and the ball trickled into the corner from his cross-shot.

Five minutes later Sam Smart crossed into the Salisbury box and in the chaos that followed appeals for handball got no reaction from referee Iain Parsons, but although they enjoyed more of the possession in the second half the visitors hardly threatened again.

Apart from one occasion when Armstrong did well to reclaim the ball under pressure from Eastleigh’s Tom Bearwish, it was the home side who finished the stronger with three opportunities before the end. Firstly on 72 minutes, the ball was cleared to Diego Romero just inside his own half and, with the keeper well advanced from his line, the youngster tried an ambitious finish from distance but did not get enough on it and the keeper was able to backpedal and gather the ball.

With five minutes remaining a flowing move saw Warren Bentley getaway down the right before feeding the ball through to Owen Taylor who was foiled by a good block from the keeper, and just before the final whistle, Romero provided a square ball for Charlie Davis to hammer a right-foot screamer at goal which the keeper somehow managed to deflect over the top with some difficulty.

Those watching were left with a very good memory of a very good game (it’s a pity that there were not more present to see it) and should see the Whites in fine fettle for the visit of Hendon in next Saturday.

At times during the friendly season, the side in its various forms has stuttered but there is no doubt that Manager Steve Claridge knows his starting eleven, with good healthy competition for places in the squad.