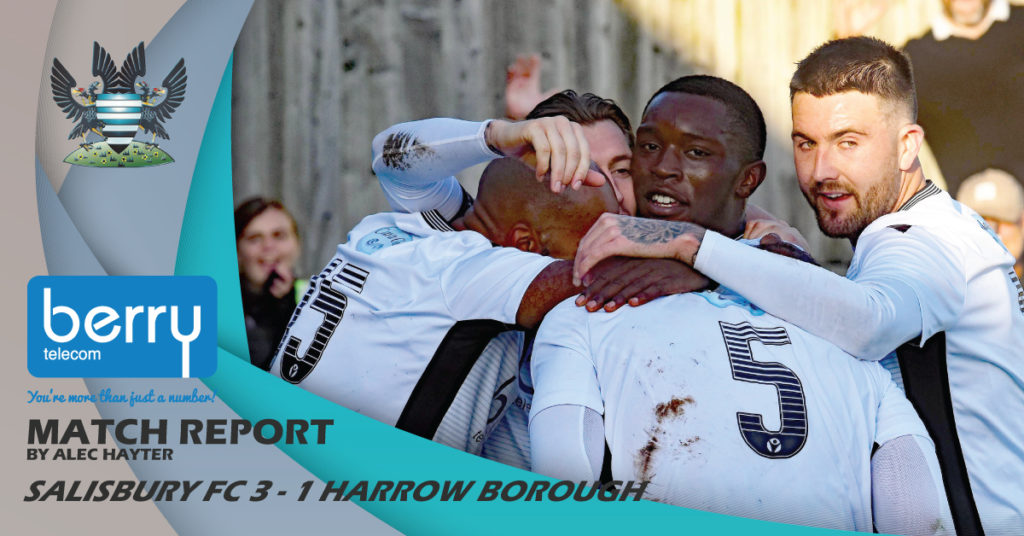 It’s been a good week for Nathaniel Oseni, with two well earned Man of the Match awards and an important goal (although he maybe tried to convince people he scored against Taunton as well!). If it’s been a great week for Nathaniel, it’s been an even better one for the Whites with nine points from nine against decent opposition-although maybe Hendon did not fall quite into that category. Fourth place in the league isn’t too shabby either, although to maintain and go upwards from that some aspects of this performance have to improve, with generously donating the ball to the opposition being one.

The memories of last year’s 6-0 thrashing by the visitors were not really banished, but the gain of three points more than makes up for that, and the reward was in one sense even more valuable because today’s performance confirmed that a good team can win without necessarily playing at their best.

As Steve Claridge said afterwards: “We got away with it today and looked leggy after the tough game against Taunton.” That was correct, even after getting off to a whirlwind dream start when, with under a minute on the clock, Shaquille Hippolyte-Patrick got the ball just inside the box, turned, and whacked a right foot shot past an unprepared Borough keeper Hafed Al-Droubi.

If anything, that got the visitors going, and the first warning sign came on 7 minutes when George Moore hit a fierce free kick from the edge of the box which forced Gerard Benfield into a hasty save. A couple of minutes later Anthony O’Connor got clear but missed a great opportunity, putting his finish well over the top.

On 14 minutes a second threat from Salisbury was produced when the hard-working Warren Bentley got to the byeline and pulled the ball back to Dan Fitchett who had a sight of goal but was denied by the keeper.

It took another 12 minutes or so before another Salisbury thrust when Shaq saw his effort saved by the keeper, but at the other end on 28 minutes Dylan Kearney found himself virtually in the clear, and just as he was about to pull the trigger, he lost out to a superb last-ditch tackle from young Tom Leak who went on to give another assured performance in the centre of defence.

Just after the half-hour, and really in accordance with the balance of play, Harrow got back on level terms when another fierce drive from Moore was parried by the Salisbury keeper, the ball falling to Frank Keita who returned it with interest.

Shortly afterwards, a teasing Lewis Benson free kick was just too far ahead of Salisbury players racing in on goal, but the feeling of unease was only increased shortly after the interval when Harrow had the ball in the net. The assistant’s flag however ruled out the effort for offside.

Salisbury had had to re-group as at the break Elliot Wheeler had to come off after aggravating a groin injury, and, just as he had seamlessly replaced Josh Sommerton against Taunton, he handed over to Alex Lafleur who obliged in the same way with the best 45 minutes I’ve seen from him so far.

On 50 minutes Benfield again came to Whites’ aid when O’Connor sent in a firm downward angled header that the keeper just managed to push round the post, before, against the run of play at the time, the Whites took the lead 6 minutes later with another Benson corner of some quality being whipped in for Oseni to bury a header from close range.

A bizarre incident with just under a quarter of an hour to go might have increased Salisbury’s lead when Al- Droubi came well out of his area and under challenge appeared to have sustained an injury, and remained on the ground. The ball broke to Dan Fitchett who had an open goal to aim for but his attempt was kept out by a defender. Referee Martin Underhay was not fooled by the keeper, nor by much else in the match, and play was allowed to continue. I’m convinced that had Fitchett netted then the goal would have stood.

In what was becoming Salisbury’s best period of the match Fitchett had another chance, having received a well -weighted square pass from Ollie Knowles which put him in front of goal but disappointingly the ball went over the bar and not under it from 15 yards or so.

Harrow started their final push and on 82 minutes Kearney’s drive brought another superb block from Benfield who did well to get behind the line of the ball, but could do no better than parry it away from goal where Ryan Moss was lurking. For his benefit. I won’t mention the trajectory of his effort, but it caused Harrow manager Steve Baker to describe him as having missed an absolute sitter!

Borough had been forced to chase the game and having just failed to capitalise on a great chance then paid the price when Bay Downing put the ball in to the danger area and Shaq pounced to belt it in from close range and make the score-line a fairly flattering 3-1, before the action was ended when Downing sent a drive over the top.

The visitors were more than capable opponents and perhaps deserved a point from the game, but I am very happy to report that they didn’t get one! Having now achieved a third win on the bounce the Whites should take enough confidence to Merthyr Town and get something on Tuesday evening. Whilst Merthyr will no doubt have been disappointed with a goalless draw at bottom club Beaconsfield Town, that will probably result in a tougher game for us at Penydarren Park.

The Whites will need your support to get the right results so please try and give it in bucket loads, after a good week with an equally tough one coming up, as after the Merthyr game there is the little matter of an FA Trophy game next Saturday against Dorchester Town. The Magpies’ 2-0 win over unpredictable Yate Town won’t have done their confidence any harm, and as any cup game has a different nature to those in the league, another difficult game is in prospect.