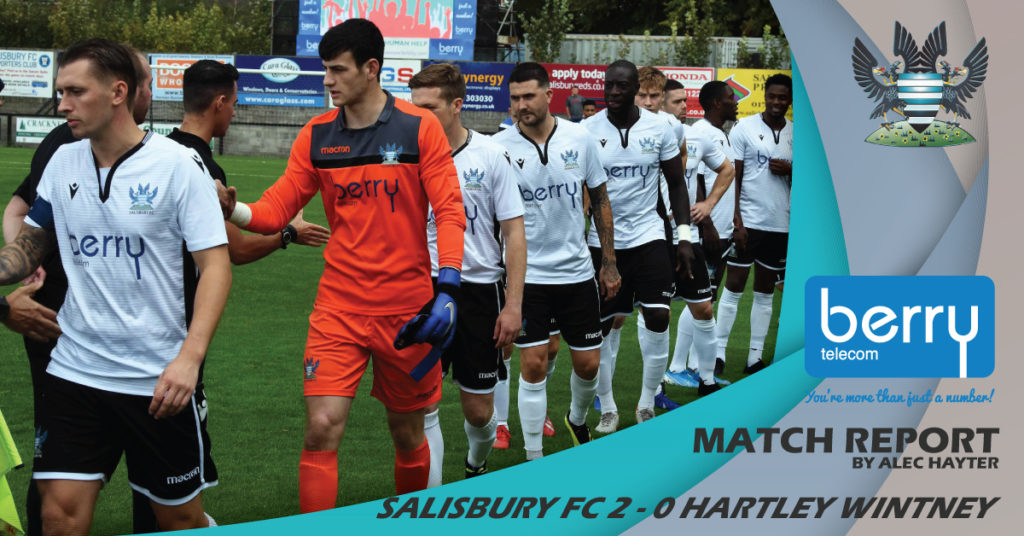 A rare clean sheet and a very welcome 3 points heralded the Whites’ return to league action, and the result catapulted them into fifth position in the table.

This was an efficient if not enthralling fairly low-key game against opponents who seemed unable to offer much threat until Salisbury were reduced to10 men after 80 minutes following an injury to goalkeeper Tom Smith, the Whites already having made all three substitutions, and any reasonable supporter should be grateful for the points.

The Row looked as though they might cause problems early when after only 3 minutes Alexandru Albert took aim from just outside the box, but his effort went well over the top, and that was really the last we saw of the visitors’ attack until nearly an hour had elapsed, with much of the play being in midfield.

It was fortunate therefore that after 8 minutes Salisbury went ahead after some good play, and on another day, with a sharper edged attack, they might well have put the game to bed thereafter. Bay Downing got into midfield and started the move which he ended up finishing himself, his ball to Shaquille Hippolyte-Patrick seeing the wide man get into a position to provide an inviting cross which Downing headed in from close range at the far post.

A couple of minutes later, the defender tried his luck again, letting fly from the edge of the box, but he was denied by a good save from visiting keeper Thomas Williams, and on 33 minutes an attempted clearance from the Rowe defence fell to Ollie Knowles, whose fierce first-time effort may well have beaten Williams had it been a yard either side of him.

Two minutes before the break Salisbury had the relief of a second goal made by Aaron Dawson, who looked much more effective today than of late, when he played the ball out to Lewis Benson who, with some composure, cut inside and scored with a left foot finish – yes, a left foot finish – one for the scrapbook Lewis maybe?

And that was it for the first half which had seen Salisbury have the majority of possession but only have two goals to show for their efforts. It is said that 2-0 is a dangerous score and that the next goal is important. Well, there wasn’t a next goal, although there could have been on 59 minutes when Mickel Platt managed to shake off the attentions of Nathaniel Oseni and was through before launching his shot over the top.

This may have been a lucky let off, but when it comes to luck keeper Williams had his fair share when on 70 minutes Hippolyte-Patrick sent in a fierce right foot effort through a crowded box which the custodian blocked, without possibly knowing an awful lot about it.

With 18 minutes remaining Hartley Wintney began to show some attacking intent and Tyron Smith sent a dipping volley just over the top from 20 yards, before on 80 minutes the visitors had their best chance of the game. A cross from the left missed out the whole of the Salisbury defence to find Nathan Smart in a great position, but Tom Smith in the home goal did what he has done regularly, getting his body in the way. Unfortunately in the process he suffered a ligament injury which may mean that this will have been the last that Salisbury fans will see of him. If that is the case however they will have seen him perform his last act for us in the same efficient manner in which he kept goal during his loan spell. If he now returns to Arsenal, I’m sure we all wish him a speedy recovery and better fortune in what is likely to be a successful career in the game.

The Whites then had to play out the remaining time with ten men, and, presumably on the grounds of height, Toby Holmes was “volunteered” to go in between the sticks.

Sometimes the best form of defence is attack though and loanee Gabriel Rogers, who had joined the action at half-time following a head injury to Ollie Knowles, found himself up against the last defender, but still managed to get in a firm left foot shot which was saved by Williams.

The visitors then sensed that they may be able to make an impression against the ten men, and two minutes into added time, Joshua Webb put a snapshot wide from just inside the box. A further two minutes elapsed before Webb blotted his copybook by ballooning another chance over.

To complete the action it was Holmes, the rookie keeper, who will have the best memory when, without having to jump too far off the ground (!) he calmly tipped Smart’s effort over the bar.

Although the margin of victory could and perhaps should have been much bigger, a win is a win, but had the opposition have been of higher calibre then things may have been different. There will be a chance on Tuesday evening for players who were not involved today to make their case, and of course it is likely that Leroy Lita will make his debut.

There is therefore plenty to interest supporters in the Southern League Challenge Cup game at Paulton Rovers, and as Rovers are going very well in their league and won 4-0 today, this will be a tough game. If you can get there, that will help us progress into the next round, but please note that the kick-off at Paulton is 7-30, and not 7-45 pm as incorrectly stated in today’s programme (because of the stupidity of yours truly!).

The importance of this game, it must be said, pales into insignificance compared to next Saturday’s encounter in the FA Cup against Margate, who lost narrowly on Carshalton Athletic’s plastic surface to a goal 12 minutes before the end. Another tough game therefore is in prospect with a lot at stake, so please come and cheer on the Whites in a very important tussle.