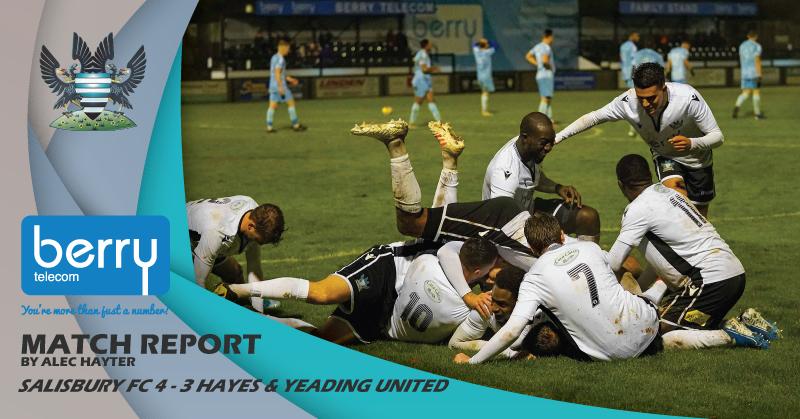 The days of “never say die” and dramatic last ditch results have returned, although after a fairly comfortable first half it should really have been unnecessary for these to be rediscovered, as, just like seven days previously, the Whites had looked comfortable in the first half, but this time had two goals to show. However, as the league game showed, there is some credence to be given to the phrase “a game of two halves”. One thing is for sure and that is that the comparatively low attendance meant that a lot of regular supporters missed out on a game which had everything in an exciting 90+ minutes, including a tremendous fight-back by each side, the more telling of which saw to the result and was probably unknown to any leaving before the final whistle. This game was a mile away from a typical qualifying round Trophy tie, but was a typical hard-fought cup tie.

It only took 12 minutes before the lead arrived with Shaquille Hippolyte Patrick easily getting behind the visiting defence before pulling back an inviting ball to Darren Mullings who dispatched it into the corner – a striker-like finish. A further 5 minutes passed and another Shaq attack, or to be more precise, assist, saw him thread a lovely ball for Bay Downing to produce a delicate chip over Hayes keeper Jack Smith for the second – a striker–like effort once more.

Hayes’ first half-chance came shortly afterwards when a ball was delivered in from their right, but Elliott Buchanan screwed his volley wide from 15 yards, and in retaliation Salisbury went to the other end where Nathaniel Oseni was unlucky to see a header from Lewis Benson’s corner strike the foot of the post.

Five minutes before half-time Buchanan should really have done better with a chance from close in but his finish ended in the side netting, and again Salisbury responded at the other end when Dan Fitchett’s flick put in Toby Holmes, who got round the goalkeeper but was foiled by a defender clearing not far from the goal-line. Not to be outdone, in time added Hayes came forward again and Scott Donnelly delivered a Benson-esque free-kick into that no man’s land area which can produce confusion in goalkeepers’ minds. Happily Jake Wannell did the clearing up from the line to maintain the 2-0 lead.

On 58 minutes Shaq cut in towards the edge of the box but saw his low effort saved by Smith and three minutes later the keeper was again well positioned to keep out an Oseni snap shot after he had received a Holmes pass. That was Holmes’ last contribution as he was replaced by Ollie Knowles when it appeared that the visitors were gaining momentum, but the aim of the substitution was nullified by defensive failings, and Hayes got themselves back into the game on 68 minutes when Buchanan’s ball across the face of goal found Ogochukwu Obi who could not really miss the gifted chance from a couple of yards.

Hayes sensed their opportunity and on 73 minutes a cross from the left found Buchanan, who, given too much space, unhesitatingly volleyed past Gerard Benfield to tie things up at 2-2, and they must have thought they had done enough to go through when, six minutes later, a long ball from Scott Donnelly found Buchanan who put the ball in the far corner from the narrowest of angles – a superb strike for 3-2.

For many a team that would have been that, but not on this occasion for this Salisbury team and within three minutes Kevin Amankwaah had the ball in the Hayes net only to see the “goal” ruled out for offside, and it took until the 90th minute before Alex Lafleur received the ball just outside the box from a defensive clearance and hit a sweet first-time volley past Smith for 3-3.

When referee Craig Scriven indicated five minutes of time added. I have to say that the lift the team appeared to get from Lafleur’s equaliser made me think “we can win this”, and in a last tremendous effort to do so Shaq was upended in the box. Referee Scriven waved away the appeals, and just when we were thinking about a trip via the M3 on Tuesday, up popped substitute Warren Bentley to settle matters and save some petrol. Another clearance found him about 20 yards out and although he completely missed the ball with its first swish, the second swipe connected and a low shot beat Smith. No one minds how many air shots are involved as long as the final touch does the job!

So we await Monday’s draw for the First Round Proper of the competition (live on Talksport2 at about 12-45), and hopefully by the time the next round is played on 14 December my nails will have grown back! They will, provided that in the meantime Salisbury do the business next week at Walton Casuals who were tamed by 3-0 by Poole Town on their 3G pitch today. Nails are in danger though if the Walton pitch plays its part like season, but at least Taurean Roberts will not be playing for the opposition and making the most of it!