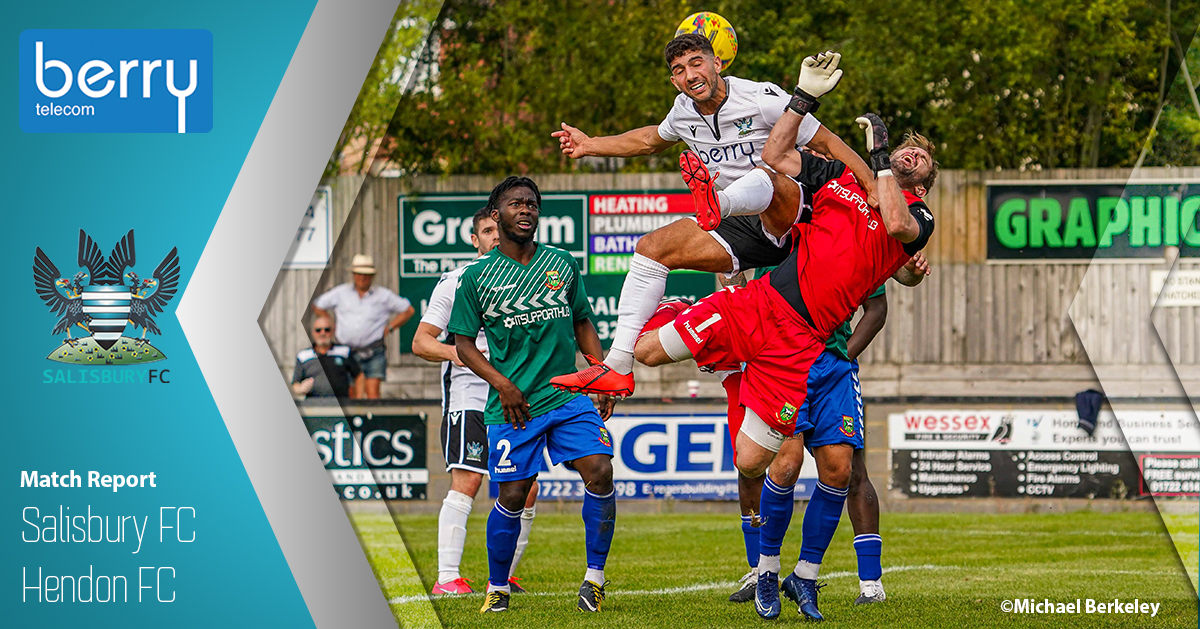 The team sheet looked good on paper, but the Whites didn’t live up to that on the pitch against a fairly average Hendon side, and this was certainly a case of throwing away two points – and that, even more disappointingly, after the best possible start.

That came after only 49 seconds and had the standard of the move which produced the opening goal been repeated, then surely the visitors would have been put to the sword, but as it was that was just about all there was to savour for most of the very good crowd who came for the long-awaited first league game of the season. Lewis Benson started the move and won the ball just inside the Hendon half before passing wide to Dominic Jeffries. He did well to get to the byeline and played an inviting ball to Marvin Brooks who, without hesitation, arrowed a right foot shot into the top corner, giving visiting keeper Jonathan North no chance.

For a time afterwards the Whites looked comfortable and on 16 minutes Jefferies was again involved in creating another chance for Brooks, chipping the ball over a defender, but the keeper did his job well to block the finish.

And that was about as good as it got at the start of the game, as, after 20 minutes, Hendon scored an equaliser- and what an equaliser it was! Sam Corcoran, in the centre circle, had the ball at his feet, looked up, saw Liam Armstrong off his line, and launched a tremendous effort from about the halfway line which caught the keeper backpedalling in vain as the ball dipped under the bar. Fluke? I don’t think so, but everyone’s entitled to their own opinion and as I understand that this is something which Corcoran does quite regularly and the hackneyed “practice this in training” phrase was not used I’ll give him the benefit of any doubt. I hope the Whites will be aware of his capabilities in future meetings.

1-1 seemed a little unjust at the time and it appeared that the balance was going to be restored when on 23 minutes a Benson free kick forced North into a good save low to his left, and also with five minutes remaining before half-time when Salisbury appealed, in vain, for a penalty.

Just before the half-time whistle a Benson cross found Dan Fitchett at the near post but the difficult header was not strong enough to beat the keeper and 1-1 it was at the break.

Two minutes after the restart, Antonio Diaz brought a good save from North once more, having received the short ball from Brooks before trying his luck with a left foot effort, but the away side threatened, mildly, shortly afterwards, with Shaun Lucien allowed time to cut back in on his right foot to test Armstrong, who was equal to the effort.

Of 56 minutes great feet by Brooks saw him try his own snapshot which also produced a good save from the Hendon keeper, and when the Whites took the lead on the hour that really should have sewn up the game in their favour. A Benson corner landed plumb in the danger area and it was so awkward for Lucas Perry that he could not avoid diverting it into the net.

It only took another 11 minutes however before the Whites hit the self-destruct button with a mixup between Charlie Kennedy and Armstrong seeing the ball arrive at the feet of Liam Brooks who gleefully deposited it into the empty net.

Hendon now had the bit between their teeth but the game came to an end with a chance for each side. Diaz will be disappointed with his header from Elliott Wheeler’s pinpoint cross going just the wrong side of the upright, and in time added Hendon’s Joe White will also have been disappointed to be thwarted by a great Kennedy block.

Maybe it was the great sense of expectation, at a home opener, or the extra pressure in playing for points, at last, which was instrumental in the Whites’ showing, but had they played half as well as they did against the higher standard of opposition provided by Eastleigh, then they would surely have romped away with the points. It was not to be however, and it turns the next challenge, in the FA Cup at Kidlington on Wednesday, into an opportunity to put things right by a team still with something to prove.

It would help them if as many of you as possible could make the trip but you should note that the attendance is limited to 300 and that any travelling supporters arriving late could possibly be turned away because of excess numbers. Tickets can be purchased by phone to 07702419950 (Les).