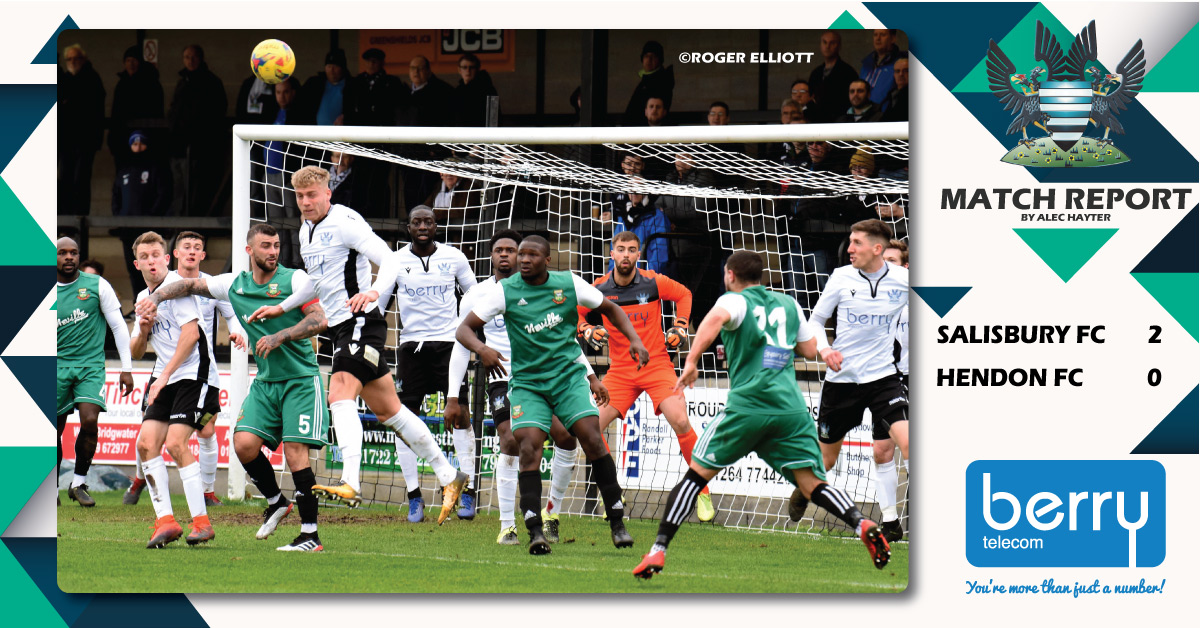 On a Saturday whose date contained an over abundance of the figure two, it was perhaps fitting that this game should end up with a 2-0 victory to the Whites, but it was a win which had to be ground out against an improved Hendon side. After the match manager Steve Claridge said he thought that although his side was in control of the game, it could never be said that Salisbury dominated the play, and a timely second goal eased the nerves to eventually seal the three points and halt a run of two consecutive defeats. A re-invigorated Hendon, having appointed new manager Ian Allinson recently, arrived at the Ray Mac on the back of a better type of run of their own during which they had been very mean in conceding goals, so it was going to be a difficult game for the home side whose confidence had been shaken after tussles with Met Police and Truro.

The first half was a sparring contest, with neither side really producing anything other than half chances to seriously trouble the goalkeepers, and although both sides tried to play football, there was little excitement on offer.

The game was badly in need of a goal and that arrived on 42 minutes after Salisbury were awarded a free kick in what has become one of the “Lewis Benson speciality positions” – a delivery from a wide position. He sent the ball into the danger area for Jake Wannell to get the faintest of touches and head into the corner past keeper Rihards Matervics. The Hendon players’ reaction was a strong appeal for offside, but that carried no weight with referee Andy Sheppard, and neither did it help their cause when they continued the “discussion” with the assistant referee on the stand side. For “goal”, therefore, read the only highlight in the true sense of the word of the first half, but it must have helped the atmosphere in one dressing room at the break.

There was surprisingly little reaction to build on that lead in the second half and the visitors began to get a hold. However, on 52 minutes in almost the only scare for the visitors, Edward Oshodi, in attempting to clear, nearly put the ball in his own net, and in fact from the press box angle there were many who thought he had succeeded – until a corner kick was awarded.

Just after the hour Hendon had their best period of the game. A 30 yard effort from Kieran Forbes tested Marcus Beauchamp, who dealt with it capably, and a few minutes later he did even better to keep out a brilliant overhead attempt by Liam Brooks, who caught the ball on the full from the edge of the box. To complete a trio of saves, within seconds the Salisbury stopper touched a Joseph White header over the bar, and the Whites seemed to have ridden out the storm.

Bearing in mind those chances, one could say that what occurred on 75 minutes was against the general run of play, as in the second half there had been only one threat on the visitors’ goal, and that the near own goal from Oshodi.

When you need something to win a game, you need someone with the goal poaching instincts of Toby Holmes, and after Warren Bentley had crossed the ball from the right, which was going into the path of Shaquille Hippolyte-Patrick, Holmes nipped in front of him and grabbed the Whites’ second with comparative ease from close range. This was Toby’s 20th goal of the season and hopefully will provide a springboard for a good few more. The only other goalmouth action came in the 80th minute with two players both having the last word (if that’s possible!). One of these was White, who produced a shot on the turn, and the other was Beauchamp who easily kept out the effort.

Any 3 points is a good 3 points and what the game may have lacked in quality was more than compensated by the result. That was even more important bearing in mind other results on the day (for example Poole Town surprisingly being defeated by lowly Beaconsfield), and Salisbury moved up to 7th place in the league to maintain the hope that they get into the play-offs. However, there are some difficult games yet to play and the next, on Tuesday, at Gosport, will be one of them as the Hampshire outfit have had some good results recently, including a victory over Truro City. Boro will be smarting after a 3-0 defeat at high riding Chesham, which looks to have been a fairly easy ride for the home side, but Gosport were holding their own trailing by just a single goal until the 80th minute, before eventually being sunk by two goals in four minutes to produce the final scoreline.

After Gosport there follows another difficult trip to Harrow Borough, who felt the power of Truro City going down by 4-1 in Cornwall. A good return from the next two league games will keep the Whites in the hunt for a play-off place. The attendance on Saturday, at 515, was by far the biggest of the day, made the trip, so get in your cars for the short trip to Gosport, and try to follow that with a visit to Harrow next Saturday.