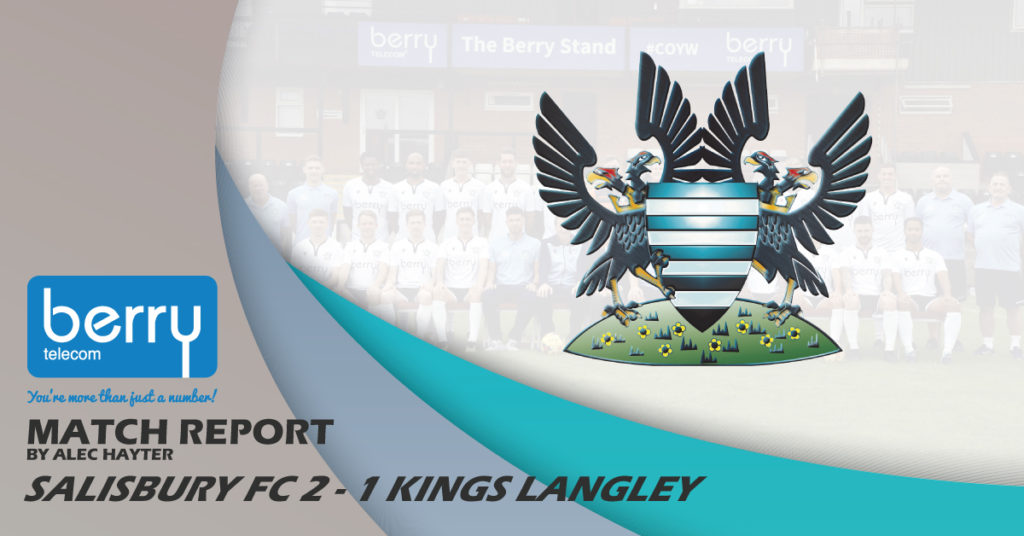 As in all cup games, the aim is to make it “job done”, and the Whites duly obliged with a narrow win after a sometimes difficult game with Kings Langley, who last season in league matches against us were awkward opponents, and only allowed us one point from the six on offer in the two league meetings.

Steve Claridge said in his programme notes that he felt Kings Langley would be stronger than some opponents of late and that was proved to be the case in the early exchanges, although in the second half his side managed to get a better grip on the game in spite of being a man short in the latter stages.

It took a great save from Gerard Benfield to keep out a Mitchell Weiss effort on 7 minutes after the effective striker had been put in by Louis Collier, with the home side’s only response being a Warren Bentley effort which went well over the top from just outside the box 4 minutes later.

Benfield again earned his corn seconds later when Roderick Collins was through one-on-one, the keeper blocking at point-blank range, and the closest Salisbury came in the first 25 minutes was when Josh Sommerton, returning from injury and playing further forward, fired in a cross from the left which nearly turned out to be a shot on goal, but just cleared the near post.

Shaquille Hippolyte-Patrick, playing wide right, was posing problems for the visiting defence whenever he had a chance to run at them, and on 27 minutes one such run produced the opening goal after he got clear of his defender and pulled the ball across to Toby Holmes, who, without hesitation, aimed a right foot finish past Melvin Minter. The keeper stood little chance of keeping it out.

So at that time Holmes was the difference, and, as it happened, he remained so over the majority of the game, in terms of the final outcome but a slender 1-0 advantage was not enough as Kings Langley responded. On 31 minutes, Stephen Ward made the first of two awful blunders during the match when he blasted the ball wide when in the clear just inside the Salisbury box, but Kings recovered from that 7 minutes later when Weiss found himself in space on the left and quickly and decisively hit an early chip over the advancing Benfield to tie up the scores.

Thus it remained until the interval but some 9 minutes after the restart Warren Bentley put in Holmes who was denied by a good block from Minter, and a further 7 minutes elapsed before the next goalmouth action at either end. However, it was worth the short wait, because Holmes got his second with a calm finish after benefiting from a superb reverse ball by Ollie Knowles.

Just after the hour Joshua Coldicott-Stevens, who scored Kings’ winner at the Ray Mac last season, nearly brought his side back on terms when he hit a speculative 25 yard effort narrowly past the upright – so narrowly wide that Benfield was scrambling across his goal to cover.

Salisbury then went down to 10 men with Bay Downing receiving a second yellow card. From my position it appeared there was not much more than a fairly tame coming together, but referee James Robinson, who was much closer to the action, judged the tackle worthy of the punishment meted out, although in the context of the game as a whole thst may have seemed a little harsh. The resulting red card means that Downing will miss the next round of the competition on 23 November.

On 72 minutes, Josh Sommerton did his job when Max Hercules had a clear chance close in, the young defender getting in the way of his finish, but as sometimes happens, going down to 10 seemed to galvanise the Whites and they deserved a late piece of good fortune when Ward committed his second crime in the 90 minutes by completely missing an open goal from no more than 10 yards. I’m really delighted that he did so, and for more than one reason – a Tuesday trip on the M25 at going home time was not a particularly attractive proposition!

So now we eagerly await the draw for the next round on Monday in spite of not having seen our favourites perform to their best. Having said that, it is of great credit to the team, which lacked the usual presence of Lewis Benson, whislt Sommerton was thrust straight back into serious action and did well to complete 94 minutes after his spell out injured.

Back in league action next Saturday we visit Hayes and Yeading and, coincidentally, my last memory of our playing at the Skyex Stadium was in a cup game. That memory is not a particularly good one, but I’m confident that the Whites can return with the points, after gaining some retribution, ,especially if our faithful travelling support in good numbers make themselves heard as usual.