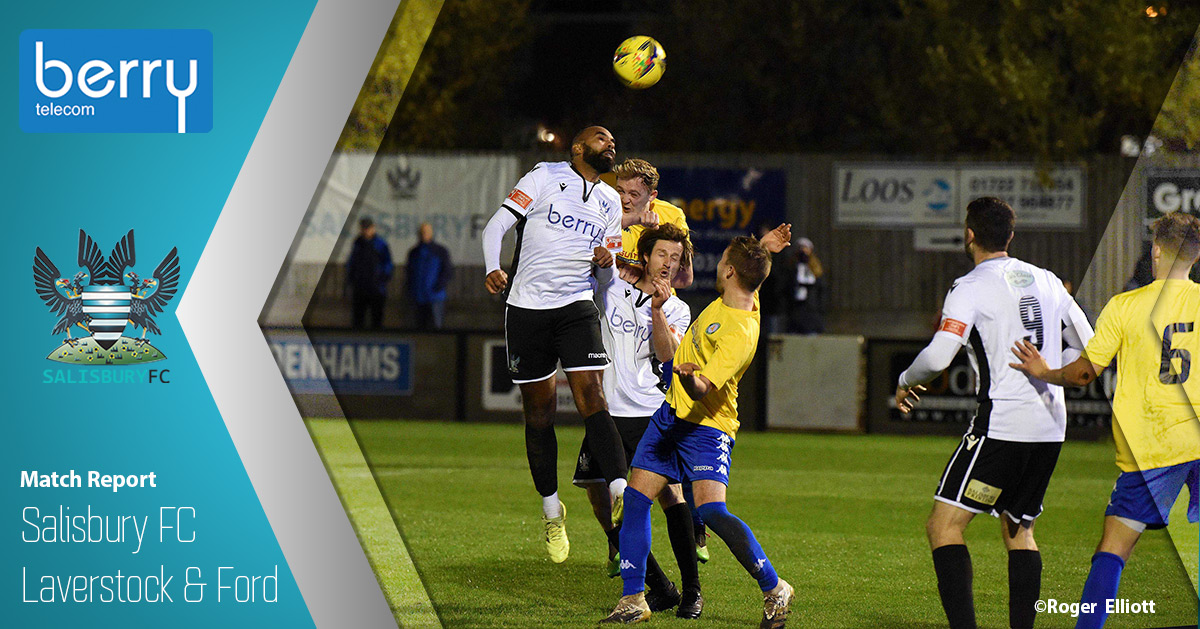 With the news that players were unlikely to even be able to train during lockdown and after Gosport Borough decided to postpone our league game with them, this hastily arranged friendly at least gave one last “hurrah” before everything comes to a standstill.

Salisbury’s starting lineup included Josh Sommerton on his return from injury and there were several changes from the team which achieved the great result against Tiverton Town, but this game turned out to be a triumph for the Sydenhams Wessex league visitors, who gave an excellent, committed performance and led twice in the game only to go down by the odd goal in five right at the death.

Although my notes reveal that understandably the Whites had most of the chances, they also show that Lavvy certainly made the most of theirs. They were the ones who fired the first shot (literally) after only five minutes when Joe Rawkins had an effort from the edge of the box which Alexis Andre saved fairly easily, but it was only seven minutes before the Whites responded when Yemi Obubade tested keeper Tom Roberts with a fierce drive.

The Bulldogs were competing well and on 34 minutes took the lead when ex-Salisbury youth player Chae Sykes went along the box and let fly, seeing his effort ricochet wide to Jake Rawkins who will probably not hit a sweeter half volley than that which rocketed into the far corner.

Nine minutes later the Whites were back on terms when Warren Bentley chased down a ball, took it round the keeper and equalised with ease, and just before the half-time whistle a Vaughn Covil backheel put in Bentley again but Roberts made a brilliant stop from the finish.

The lively Bentley brought a further good save and Roberts again did well to keep out a later Dan Fitchett effort seven minutes after the restart – Salisbury having made several changes for the second 45 minutes.

Those changes, which saw some unfamilar names join the action, seemed to have little effect, but with 32 minutes left Marvin Brooks and Harry Baker were introduced, and it was not long before the latter made an impact, receiving a ball from Darren Mullings but hitting the side netting with his attempt. Action man Baker found himself with a chance to test Roberts on 73 minutes but the keeper did brilliantly to block the finish and a few seconds later good combination between Odubade and Charlie Kennedy saw the former go high with his attempt.

When it might have been reasonably expected that the visitors would be running out of steam, they didn’t, and on 78 minutes Sykes fed Archie Lovegrove who forced substitute keeper Will Betts into a save, but a couple of moments later that pairing profited from some slack defending and Lovegrove provided Sykes with an opportunity which he dispatched from close in to give his side the lead.

The last 10 minutes in particular were all about Baker, who has developed the great habit of scoring in most games! On 82 minutes he received the ball from Odubade and grabbed an equaliser before, with three minutes left, Brendan Holmes, one of the new names to appear, played him in again to turn onto his right foot before beating Roberts with a low shot.

This must have been a bitter blow to the visitors after their efforts against a Salisbury side who were clearly in training mode – and that is not in any way intended to take anything away from the Bulldogs’ tremendous effort. The Whites had perhaps a sterner test than they were expecting, but still managed to snatch the late winner.

The memory of Tiverton will more easily stay in my memory though until December!