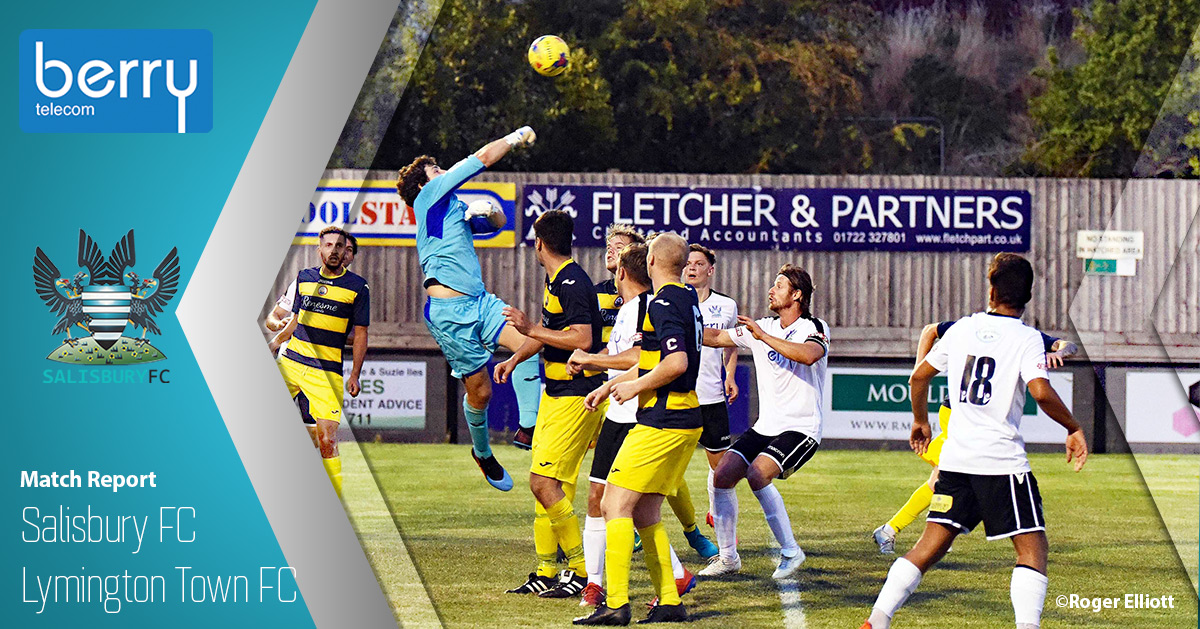 They talk about “tropical nights” but in the first two friendly matches it’s been more a case of tropical football, and in those two matches the rare phenomena (thankfully) of goalkeepers making errors, firstly with Jake Hallett’s error for Moneyfields and, on this occasion a misjudgement in the first minute by young Will Betts, who was not helped by a ball rearing up off of the hard surface before floating over his head. Such unfortunate errors are best confined to friendly matches, but this one gave the visitors an unlikely and possibly unexpected lead!

That setback was quickly brushed aside however, and confidence restored in goalkeepers as a breed when on 5 minutes Town’s stopper Ross Casey pulled off a “worldie” at close range to maintain his side’s lead, but he could do little to prevent an equaliser only seconds later when a deep Lewis Benson corner found defender Sam Roberts doing a great impression of a striker in volleying home at the far post.

The lively Antonio Diaz then provided another cross to the far post and, in very similar fashion, Dan Fitchett volleyed home to give the Whites the lead on 12 minutes with a third, again from Fitchett, coming only 3 minutes later. Thus we had seen 3 goals in 9 minutes – all being taken from crosses to the far post! Something to ponder for the vocal Lymington Manager Paul Masters!

It was not until 6 minutes before the break that Lymington threatened with Luke Churchill sending a 25 yard freekick narrowly over the bar, and it remained 3–1 at half-time.

Eight minutes into the second period, Salisbury stretched their lead when Diego Romero did well to go at his opponent down the right before passing inside to Owen Taylor, who, without hesitation, hit a first time right foot effort over the keeper into the corner.

There was a 20 minute respite for the visitors, (that there should be was understandable in the heat), before the Whites added their fifth and final goal when the hard working Harry Baker made his way towards the box, with the ball going towards the right before Romero coolly finished with a low shot.

It could then have been 6–1, but Warren Bentley was denied by a great save from Casey, who must have been relieved just before that when Baker chose to shoot , not noticing the unmarked Bentley in front of goal.

The last word went to the visitors however, when a free kick into the danger area saw Lymington’s Steve Flynn grab a second in a crowded box..

Another satisfactory outcome thnerefore, not only in the final score, but also in the purpose of the game which, at times showed good passing, but, above all once more a tremendous effort from the players to maintain any type of momentum in the trying conditions.

Next up is a trip to Andover New Street on Saturday with a 12 noon kick-off. Let’s hope the weather is more forgiving at that peak time or, if not, that the players remember their factor 50!