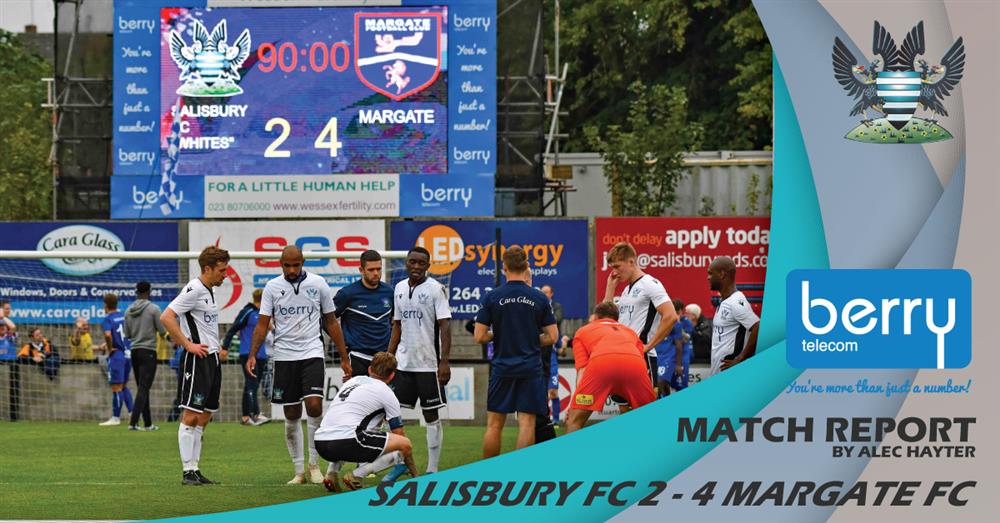 As a result of a recurring malaise at the Ray Mac some of the floodlights went out and reparation will be an expensive exercise. As a result of another recurring malaise at the Ray Mac and elsewhere, the lights went out on Salisbury’s involvement in the Emirates FA Cup this season, which is of course is also costly, in financial terms as well as Cup excitement.

The Whites were the architects of their own downfall and, as in so many matches this season, they have gifted the opposition points in league games, and the tie in this cup encounter. As well as making errors, Salisbury suffered some misfortune, but that ill-luck cannot be blamed for the exit from the competition. There is something about playing teams from the Isthmian league which causes problems and the visitors were fairly typical of their league, and more than capable in their approach to the game in making the most of the opportunities presented to them.

Having said that though, they were guilty of missing the chance of a great start in the first minute when Elliot Reeves managed to get through but saw Gerard Benfield save his effort at close range. An early let-off therefore, which spurred the home side into a response and saw a good move between Aaron Dawson and Bay Downing give Dan Fitchett a half chance. The effort was on target but unfortunately visiting keeper Joseph Tupper was behind the ball.

On 10 minutes a Josh Sommerton corner found Nathaniel Oseni in a great position in front of goal but the resulting header went well over the crossbar when it should have opened the scoring, and 13 minutes later, after having seemed to be in hardly any trouble at all, Salisbury fell behind. On more than one occasion, the ball was presented back to Margate and the last time it happened the impressive Kandell Daniel took it in his stride and sent a curling first time half volley into the net to give his side the lead.

A couple of minutes later ‘Gate could have doubled their advantage but Benfield denied Reeves in a one-on-one, and although Salisbury were having the majority of possession they produced little to perturb the visitors, apart from when on 33 minutes a Lewis Benson freekick from just outside the box shaved the crossbar. For their part Margate responded when Reeves put a cross shot past the post, but that represented the last of the first half goalmouth action.

There was hope that Salisbury would get back into the game for at least a share of the spoils, but, in accordance with the saying that “you can’t please all of the people all of the time”, had a draw resulted from this game yours truly could not have been present for any replay. I need not have worried about that though when, under a minute from the restart, 10 seconds’ stupidity lost the game and conjured up thoughts of mountains …..climbing etc.. A second goal, gift wrapped for Christmas, appeared to put the writing on the wall, Oseni making a schoolboy error, aiming his pass back between the posts with some pace. Unfortunately Benfield was not by that time between the posts and the ball entered the net to the delight of the visitors.

It was understandable that heads dropped immediately but that would have been more acceptable had there been a positive reaction. Instead however, on 53 minutes, Jack Richards was allowed to twist one way and the other before putting a 20 yard effort just wide, and seconds later a ball was pulled back from the byeline for Noel Leighton to fire home from close in, and in too much space, the ball taking a slight deflection before making it 3–0.

There was a glimmer of hope when on 56 minutes Shaquille Hippolyte-Patrick cut in along the edge of the box and tested Tupper with a right foot drive, but the keeper dealt capably with it. There followed a short period of better play which gave some hope and on 59 minutes that hope was given credence when a Benson free-kick from way out on the left was propelled at that awkward angle which always causes doubts in the minds of goalkeepers and defenders. The ball went in the far corner, and it appeared that it might be “game on”, but only 5 minutes later it was “game over”.

‘Gate’s fourth goal had more than an element of luck about it as, although Leighton struck the ball firmly, it took no less than two deflections to completely wrong-foot Benfield and restore the three-goal cushion.

Just before the end a fairly meaningless consolation goal was provided when Hippolyte-Patrick found himself in prime position to finish an inviting pullback from Toby Holmes, but that was scant consolation for missing the chance to get to the furthest point in the competition since the Club was reformed.

After the game a distraught Steve Claridge stated the obvious: “We cannot go on through the season giving away stupid goals”. He is not wrong, but he also has the problem of finding a system which will bring the best from the squad.

Supporters will be aware that he has tried 4-4-2, “which sometimes leaves us too open in midfield” – yes, and 4-3-3, “which can leave the front player isolated”. – yes again. “We have not been able to play either system consistently well, and one system doesn’t fit all, which makes things difficult. I think we have gone as far as we can with this group, and we need to let some players go, and freshen things up.”