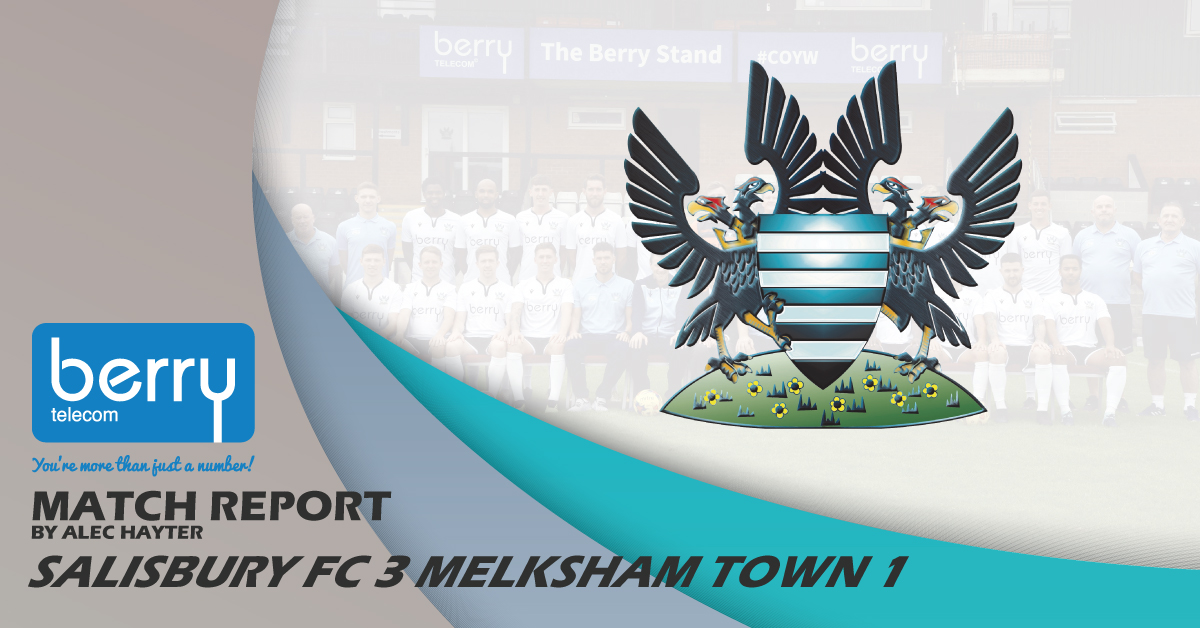 In the last two league outings, the Whites may not have enjoyed the best of fortunes, nor the best returns for their efforts, nor either played as well as we know they can at times, but against Melksham Town they had their fair share of the first (the opponents would say more than a fair share), the best outcome for the second, and in relation to the third there were signs, albeit in small measure, of an improved performance. What should have been a fairly easy stroll in the park for a strong Salisbury side was neither easy nor a stroll, as Town, with a point to prove made life difficult times. This is not an uncommon facet of cup games!

There were two main positives to come from the match, firstly return to goalscoring form of Toby Holmes, and secondly the return of goalkeeper Marcus Beauchamp who looked composed and made some fine saves. The first of these came on 11 minutes when a goal bound right foot shot from Phil Ormrod tested him. Six minutes later it was an easier task, as a freekick was back-headed towards goal by Josh Ford, and it was not until the 20th minute before Salisbury showed any threat whatsoever when a Lewis Benson freekick found Owen Howe’s head, but the head could not direct the ball.

On 35 minutes the Salisbury keeper pulled off another good save, this time from Luke Ballinger’s right foot effort from the edge of the box, before Salisbury had a good period, finishing the stronger just before the break. It was in fact five minutes before the break when Benson and Howe combined for the best move the Whites had produced thus far, with the latter squaring the ball across the face for Bay Downing to toe poke home. There was, as well as a sense of relief, the feeling that maybe this opening goal was against the run of general play.

Seven minutes into the second period Dan Fitchett cut in from the right but fired a shot past the far post and on 62 minutes the introduction of Toby Holmes freshened things up as he replaced Fitchett. It took only 3 further minutes before the Holmes’ cross shot went narrowly wide of the upright.

On 68 minutes however, the visitors grabbed a deserved equaliser, but this came as a result of the first of several errors on both sides made during the remainder of the game. On this occasion Ollie Knowles dwelled on the ball just outside the box and was robbed by Will Christopher, whose cross gave Ormrod simplest of headers in front of goal.

It took only 5 minutes, though, before Salisbury regained the lead, and this had a tinge of luck about it in that referee Shane Mansfield missed a foul in the buildup, which might well have halted play. However, play continued and in a flurry of activity Danny Young saw his shot cleared off the line but the ball fell obligingly to Holmes who made no mistake to give his side the lead for the second time.

Straight away the visitors came back and only three minutes after going behind a deflected shot by Melksham’s Ollie Webb brought the best from Beauchamp. A couple of minutes later a corner delivered to the edge of the box saw Ormrod swing his left boot, but send a first-time effort over the top, and we had to wait until the 4th minute of time added before the third goal arrived to produce a fairly flattering scoreline. An error by David Thompson presented the ball to Holmes who needed no further invitation to round keeper Seb Tyler and settle things, planting the ball into the back of an empty net.

Melksham had made a great effort and no one would have been surprised until then had we all have had to suffer extra time and penalties at the very least, but, mercifully, this was not the case and Salisbury go through to the Semi Final. I hope that the rest of the season’s good fortune with not used up in these 90+ minutes but, by the same token, a win is a win and hopefully a better feeling can be carried into a difficult game against the Blackfield and Langley on Saturday. The Whites have not got a great record against these opponents over the years and  it really is about time the bogey was laid to rest.