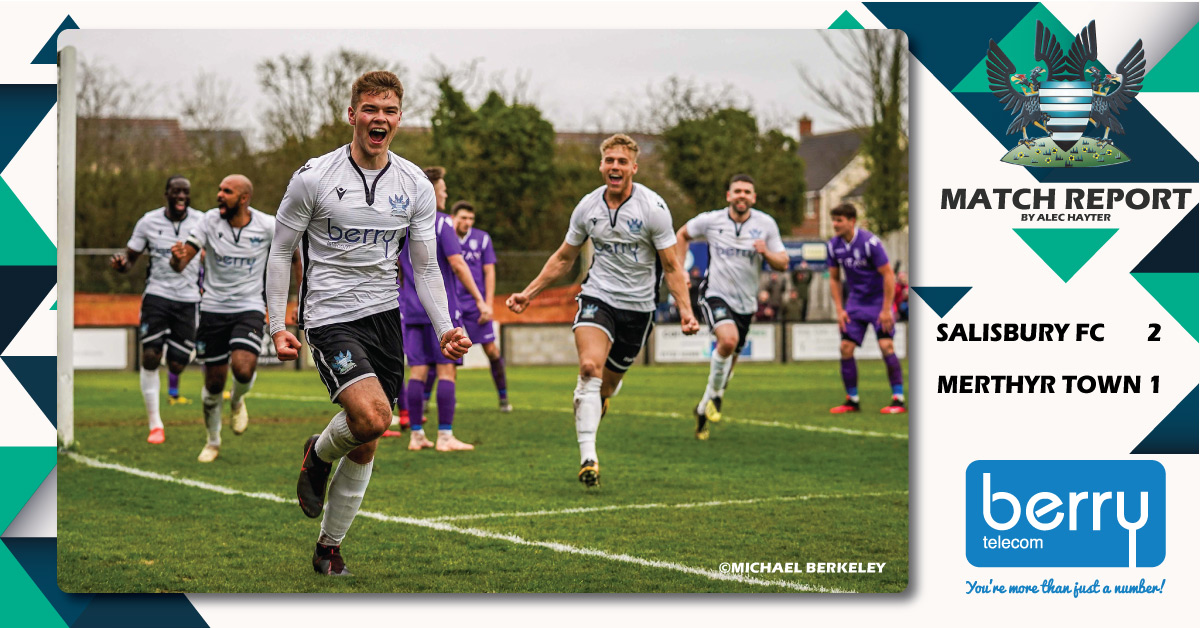 “A game to forget, but we got 3 points.” was Steve Claridge’s departing comment, but there was also some cheer from other results, which continue to surprise.

There was, however, not much to surprise or delight anyone during 90+ minutes’ toil, which produced a dour contest. In the early stages and throughout much of the match, the Whites were the better side, but that is a comparative term only as the general quality of play was not what we are used to, and the game came nowhere near the meeting between these teams in Wales earlier in the season.

Salisbury were first to show any threat when, on 6 minutes, Kevin Amankwaah got down the right and crossed for Jake Wannell to send a firm header at goal, but unfortunately also at visiting keeper Alexander Harris, who had an easy task to keep the ball out, and in spite of having the majority of attacking play it was not until 9 minutes later that more genuine goalmouth action occurred. Surprisingly, after the pressure at one end, the opening goal was scored at the other, and was very much against the run of play. Somehow Merthyr’s Lewis Binns was allowed to get to the byeline and he sent in a low cross to the near post where Owain Jones’ crisp finish slipped across Marcus Beauchamp and into the corner.

Home spirits were raised however, when in a matter of minutes Salisbury were at the Merthyr end, with Shaquille Hippolyte-Patrick weaving his way past three defenders before being brought down in the box. Referee Declan O’Shea had no hesitation in pointing to the spot before the spirits which had been raised were quickly deflated. Dan Fitchett’s spot kick went well over the top and a good chance gone, but on the balance of play surely there would others, and justice would be done.

However it was in fact the visitors who had the best chance of what remained of the first half when Wannell seemed to trip halfway inside his own half on 39 minutes and, bhaving been one-on-one with Jack Williams, thus freed the Martyrs’ striker to bear down on goal. Thankfully from Salisbury’s point of view, Williams could only hit the upright and the ball rebounded to safety.

I’m sure few would have been too concerned that the visitors had a slender lead at half-time and most will have been heartened, and at the same time worried, when a well struck Lewis Benson free kick from just outside the box was superbly saved by the keeper. Maybe the thought occurred that having gone ahead against the run of play, Merthyr would then benefit from an excellent display from their goalkeeper to maintain their lead in spite of all Salisbury’s efforts. With what followed, we will never know!

The equaliser came, however, in a most unexpected but nevertheless very welcome way when Benson’s corner to the far post saw the ball strike Daniel Summerfield and go into his own net. Howls of protest from away players did nothing to persuade the referee that anything untoward had occurred as the ball came in to the crowded area, but an overzealous protest from the Martyrs’ keeper (and I’m being polite here!) ensured that he would have plenty of time for a relaxing shower whilst his teammates battled on with 10 men. That they did so fairly well was probably as much down to their commitment as to Salisbury’s seeming inability to stretch the play, and we had to wait until 14 minutes before the end before any further serious threat was made on the visitors’ goal, Ollie Knowles being not too far wide of the mark with a 20 yard right foot effort.

Ten minutes before the end a very valuable goal separated the sides and young Tom Leak was in the right spot at the right time to capitalise on Benson’s ball to the near post. The youngster marked his debut by scoring a striker’s goal at Hendon and, unless there is a change of heart, he will have finished his very satisfactory spell with us with a Man of the Match performance and another striker’s goal. At Hendon it was his right foot which did the damage, and against Merthyr he showed that his defensive heading qualities could be employed much further up the pitch. Two striker’s goals – not bad for a defender! We wish you well Tom, and a successful career in the game.

A forgettable game – yes, but three points are always welcome and many more similar returns are needed, starting with what looks to be a tough game at Harrow on Tuesday evening after Boro came away from Met Police with a 3-1 win under their belts (something which has eluded the Whites on more than one occasion). It doesn’t get any easier as next Saturday the long trip to Truro City awaits, and they will probably have been disappointed with being held to a 1-1 draw by Taunton Town. Their pain may have been eased however by the very surprising result which saw Chesham lose by the odd goal in 3 at home to Hartley Wintney. What a strange league this can be!