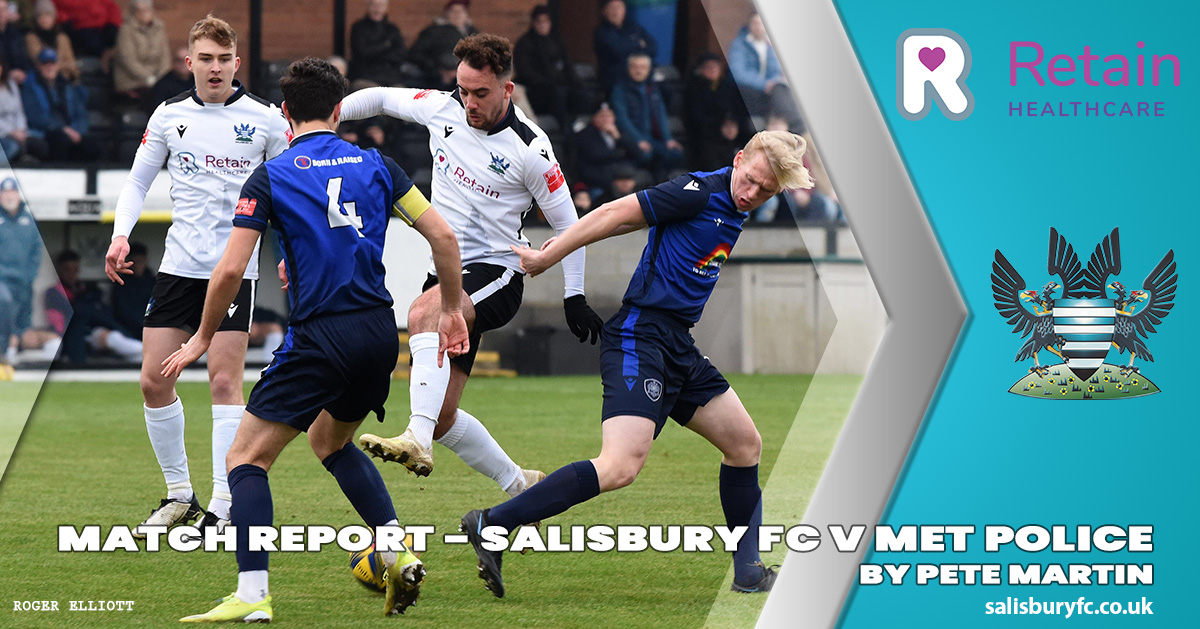 An improved Salisbury performance was not enough to gain victory when they entertained high flying Met Police. With fewer Covid absences and injuries easing slightly, Steve Claridge was able to name a pretty strong side including a debut for loan signing Lewys Twamley.

The first 15 minutes was a cagey affair with neither side able to break through and clear cut chances being few and far between. That changed shortly after the quarter-hour mark when Twamley played a clever ball into the right-hand side of the box to find Antonio Diaz who finished well to give the home side the lead. That seemed to immediately rouse Met Police and they drew themselves level within 90 seconds. A corner from the left saw Patrick O’Flaherty initially make a fine save before the ball fell nicely to allow Oliver Robinson to scramble home an equaliser. The goal led to a sustained spell of pressure from the visitors and they had 3 good chances within 5 minutes. Firstly Jack Mazzone saw his shot well blocked by Jack Ball before Johnathon Hippolyte shot narrowly wide and then Mazzone’s header went narrowly over the bar. Salisbury regained a foothold in the game and saw Diaz shoot wide when well placed on the edge of the box before Josh Sommerton couldn’t force the ball home at the back post following Diaz’s free-kick. The final chance of the half went Met Police’s way and saw Mazzone shoot straight at O’Flaherty just as the half time whistle went.

The second half saw Met Police get off to a lively start and both Liam Ferdinand and Mazzone had efforts before an injury to Ball saw Salisbury switch to a back 3 shortly before the hour mark. The next chance fell Salisbury’s way and Sam Ashton will perhaps feel he should have done better with a header when Charlie Davis crossed to the back post. The home side was left to rue that chance when 7 minutes later Met Police took the lead. A quick break down the right-hand side saw the ball reach Ferdinand in space and he finished well beyond O’Flaherty to the delight of his teammates. The goal meant Met Police were able to control the majority of the last 15 minutes and despite Salisbury striker Ashton putting the ball over the bar from substitute Devon Arnold’s ball in, they added a third with 5 minutes to go as Jaspar Mather swept the ball home following another break down the right. Salisbury could have got one back in time added on but first Marvin Brooks’s deflected effort from the edge of the box was tipped over before Kensley Maloney cleared the resulting corner from off the line.

Salisbury will be happier with the performance put in, if not the result, and will hope to gain some confidence when they take on Melksham Town at home in the Wiltshire Premier Shield on Tuesday, kick-off 7:45 pm. They are back in league action next Saturday when they host Weston Super Mare.