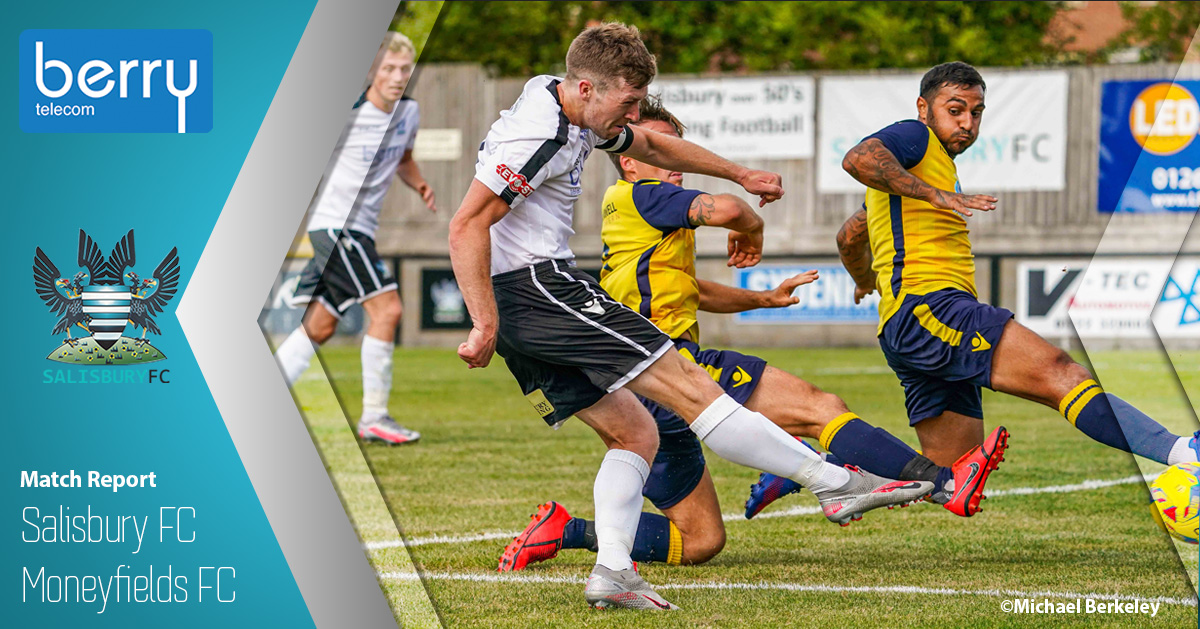 Against Moneyfields, who had already played two friendly matches and scored 16 goals in the process, this was not likely to be the most straightforward of friendly matches, especially with its being the Whites’ first, but there was enough on show from the home side, especially in the first half, to see to it that Salisbury completed the victory which was not as close as the scoreline might suggest.  That the game was played at pace at all was a credit to both sides in temperatures exceeding 30°.

Salisbury started with only four players from last season, but had a team sheet of 22 and rang the changes at half-time, with six of the initial starting eleven being substituted and the others getting deserved relief from the heat, on the hour.

Ex Salisbury goalkeeper Jake Hallett had to be at its best in the early stages and pulled off a great point-blank save from new striker Harry Baker after only four minutes, and the keeper was on hand shortly afterwards when the ball landed at the feet of Lewis Benson on the edge of the box, whose fierce drive brought out the best from him.  Another good save on 16 minutes saw him deny trialist Tommy Willard’s effort, and the keeper would have had little chance had Jack Ball’s header not narrowly missed the upright on the half hour.

The Whites could easily have been ahead early on, but had to wait until a minute before the (welcome) break – sorry – still in Motorway mode – before taking the lead.

Hallett will not want to remember that as Dominic Jefferies’ attempt outside the box  to control a pass forward from Charlie Davis saw the ball deflect goalwards and, (to give the keeper the benefit of the doubt), probably found just about the only bobble at the Ray Mac before going over his foot into the net.

The second goal, ten minutes after half-time, had a lot of class about it, and was the result of a superb cross from Josh Sommerton, who chased down an equally superb reverse pass into the corner. At the near post Warren Bentley, on at halftime, sent a bullet header past Hallett. There was no stopping that.

On the hour there were more changes, with a mixture of experienced and not so experienced players seeing action. The Moneys responded and got a consolation goal when young Tom Feest was adjudged to have handled the ball in the box. Another ex White, George Barker, gave substitute Will Betts no chance with a belted rising shot.

Moneys’Joe Briggs should have done better with his finish well over the top on 80 minutes, but young Betts showed his capabilities two minutes later when he came off his line to deny Jamin Latta in a one-on-one.

Dan Fitchett nearly had the last word just before the whistle when his effort gave Hallett more work to do with a low shot, but the main aims of this first friendly were achieved. The initial games are all about fitness and “getting to know you” in match conditions for the players, with the result being of little importance, but it was still nice to get off to a winning start.

Next up, Lymington FC on Wednesday, and they won’t want to be reminded of their first outing – against Moneyfields!

Subs on the hour: