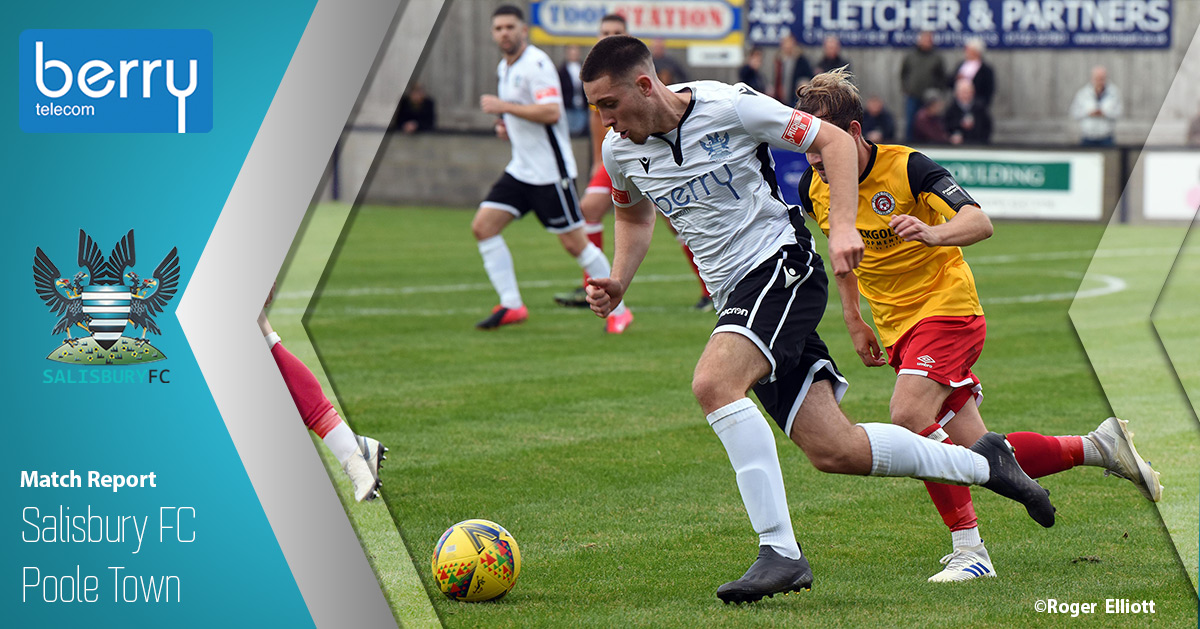 Eat your heart out, customers of Sky and BT Sport who are being asked to pay an extra £15 for the “privilege” of watching some often sterile Premiership games. It’s a sobering thought that for less than that they could witness a great local derby at the Ray Mac like the one between these two local rivals today, which ended all square.

After they gave themselves a mountain to climb, being 2-0 down at the break, a much more effective Whites’ second-half showing combined with some pressure at the end of the first not only levelled things up in the end but might well have ensured that all the points remained in Wiltshire. With two teams previously unbeaten in the league something had to give, and it was certain that the Dolphins, fresh from their tremendous win over Truro City, would provide stiff opposition.

After only four minutes the visitors’ Tony Lee thought he had a reasonable claim for a penalty but that was brushed aside by referee Shane Mansfield. A couple of minutes later the impressive Christian Saydee brought a good save from Liam Armstrong, and when they took the lead on seven minutes Poole looked well set, the goal coming from Jamie Whisken who was on hand to stab home from close range after Benjamin Greenwood’s freekick was only partially blocked.

The Salisbury reaction was swift when only seconds after the restart Antonio Diaz fired a rocket shot from the edge of the box which whistled past the upright, but at the other end Lee was denied by Armstrong who reacted quickly to a cross from the Poole right. Obviously buoyed by his goal, Whisken then tried an audacious effort from the halfway line which forced Armstrong to touch the ball at full stretch over his bar.

The Whites then had a good spell with Charlie Kennedy feeding Marvin Brooks who was blocked as he was about to pull the trigger, and on 18 minutes Diaz got to the left byeline before delivering a great low cross which eluded the onrushing Lewis Benson.

On 23 minutes the referee was busy again when Dominic Jefferies was bearing down on goal and looked to have been impeded in the box, but the official again waved away the appeals.

Three minutes later Armstrong did well to come off his line to block Saydee but it was only a few more minutes before the Dolphins increased their lead, and this time referee Mansfield unhesitatingly pointed to the spot when Armstrong was adjudged to have brought down Lee in a one-on-one.

From that point on until half-time it was all Salisbury and a tactical change helped in their efforts to try and regain a hold before the interval, with Ollie Knowles first trying his luck on 36 minutes from the edge of the box, and then, two minutes later a near post cross from Diaz finding Brooks who was thwarted by keeper Mark Childs.

Lewis Benson then cut inside from the right but could not keep his left foot effort down and two minutes before the break Darren Mullings, receiving a short ball from Brooks saw his attempt deflected wide. Before the referee blew for half time Salisbury made two further chances when firstly a raid involving Dan Fitchett and Brooks saw the ball fall to Diaz whose shot was again deflected, and secondly when Jefferies fired over.

After this pressure the visitors were fortunate to have kept the 2-0 scoreline at half time, and although the play became more scrappy in the second half as the Dolphins obviously tried to hold on to what they had, as the game wore on the Whites dominated the play and eventually levelled things up. Their progress was in no small way helped by the introduction of Vaughn Covil who made a good, mature debut appearance.

There was a certain amount of irony when Harry Baker not only came off the bench against his old club, but to rub salt in the wounds pounced from close range to make for an exciting conclusion after some mayhem near the visitors’ goal line.

With fresh hope, Diaz jinked inside with 18 minutes remaining before sending a right foot effort over the top, but two minutes before the end his corner gave Brooks the kind of opportunity which he does not pass up, and with lightning reactions he got in front of his defender to power in the equaliser, giving Childs no chance.

Marvin Brooks gets in first for Salisbury’s second.

In six minutes of added time the Whites nearly made the points their own when Mullings laid the ball back to Vaughn Covil who was unlucky to see his left foot curler fly just past the upright.

This was a game of what might have been, with Dolphins’ manager Tom Killick confirming what most of those present probably thought in that Salisbury deserved a draw at the very least, and that must bode well after competing with a team that had already defeated some of the fancied teams in the league.

Next Saturday the Whites can make the relatively short trip to Hartley Wintney with some confidence as the Row were put to the sword by 4-0 at Hendon end their unbeaten start, but many will remember a narrow victory by the odd goal in seven at Green Lane on our last visit. The hosts have an FA Cup game against Barking on Tuesday evening and that should give an opportunity for an assessment of the task at hand.