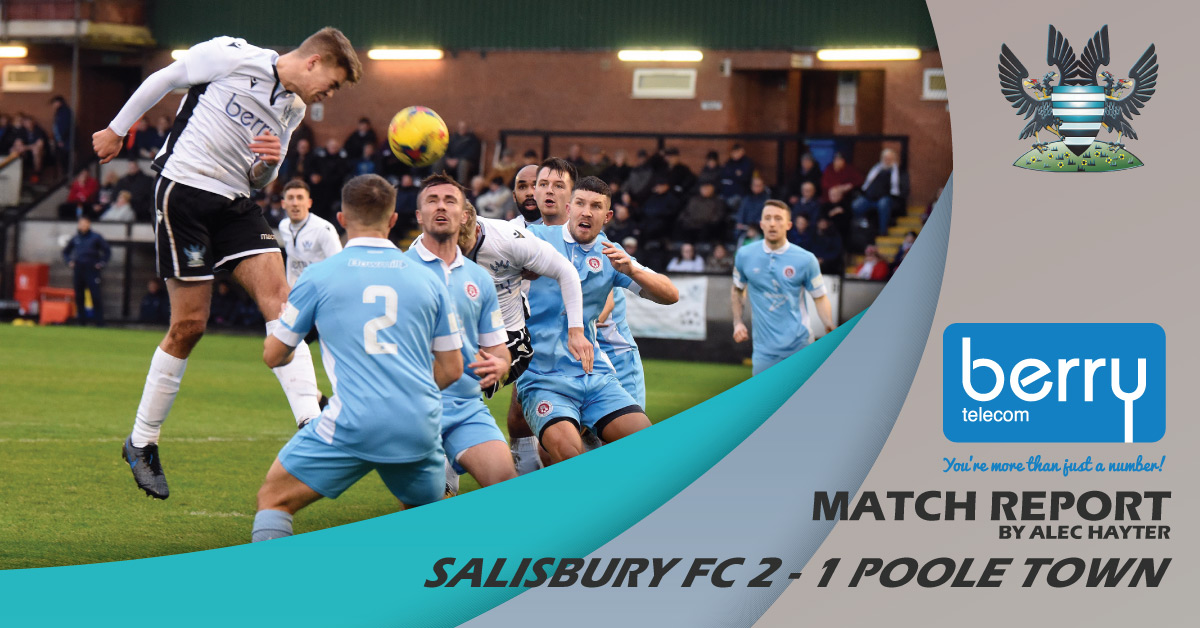 The pitch at the Ray Mac had needed a Mac to withstand all that the elements threw at it, and the Whites withstood all that the Dolphins threw at them to record a hard earned three points, which to many felt like six and lifted Salisbury one place in the table to seventh position. Games between these sides are always close, and this was no exception, although in the first half, the Whites had much the better of things, although there was always a threat that had the visitors been a little more bold in their approach, they could have posed more problems.

The first half had few clear-cut chances, but one was nearly produced after 5 minutes when Shaquille Hippolyte-Patrick threaded a pin-point ball through the defence, but unfortunately Toby Holmes found the weight of pass a little too strong to reach it.

The Dolphins manufactured a great opportunity on 18 minutes when Josh Carmichael flicked a clever ball over a defender to Harry Baker, who found himself in the clear close in, and central, but Baker hastily belted a half volley well over the top when he could and probably should easily have given his side the lead.

That was a let-off, and the Dolphins were made to pay when the lively Warren Bentley, who had caused them all sorts of trouble, was bundled over in the box by Corby Moore, with referee Daniel Flynn pointing to the spot without hesitation. Also, without hesitation, Bay Downing stepped up to take the penalty, and calmly placed the ball past wrong-footed keeper Luke Cairney.

The only other goalmouth incident of any note the first half came on 27 minutes when, after the ball had ricocheted around the Poole box, suddenly Holmes found himself in a tight one-on-one with Cairney who managed to deny him a finish.

A slender 1-0 lead at half-time was indicative of the first half, as although the Whites deserved it, the visitors had looked more than capable of a response – and respond they did before a minute of the second half had elapsed. It seemed as though only one team had come out of the dressing room as, in a swift break down the right side, Moore had an opportunity in the clear. His firmly hit cross-shot looked to be going past the far post but Marvin Brooks was on hand to stab the ball home from no distance at all. Game on!

Having received that immediate filip, the Dolphins gained more confidence and Salisbury’s debutant goalkeeper Liam Armstrong had, and passed, his most serious test of the game thus far when he got down well to keep out a low cross from right which was too close for comfort at his near post. Up until that point he had shown admirable calm and good handling of crosses and with ball distribution, and he continued in that vein to play his full part in the team to keep the visitors at bay in a more forceful second period.

The game was beginning to open up and on 53 minutes Shaq cut in from the right before sending his finish just wide of the post, prompting shouts of “show him outside.” from the Poole technical area. When he’s in the right mood, showing him either side can be dangerous!

The Dolphins were gifted a good chance five minutes later when an under-hit backpass nearly embarrassed Armstrong, but the young keeper did well, and enough, to sufficiently put off Baker as the striker tried to get round him so that, when he did, he put the ball wide. Later, the loanee produced a great save from Billy Maybury’s freekick from just outside the area to further show his pedigree.

Although Poole were still potent, it was the Whites who finished the game stronger and on 70 minutes might have taken the lead when Downing’s 25 yard free-kick took a slight deflection before clattering the foot of the post.

Throughout the game it had looked as though one goal either way would be enough to win it, and with six minutes to go, that goal came for Salisbury. In a raid down the left side Holmes tried his luck with a shot on target, but the ball hit a defender and rebounded out of the area where Shaq returned it with interest through a forest of legs giving Cairney little chance.

There is no doubt that Poole will cause teams lots of problems, but there is also no doubt whatsoever that Salisbury, in the determined mood seen today, will more than match them in that, and in other ways too.

A great three points today can possibly be doubled to make it a perfect Christmas brace of games on Thursday when Wimborne Town visit the Ray Mac. Today’s crowd, 668, was a brilliant turnout considering that it was the last Saturday shopping day before Christmas, and even moreso as the weather was atrocious. Hopefully the weather will be better on Boxing Day and that even more of you will turn up to see what promises to be an entertaining match, as although not having the best of seasons so far, the Magpies always provide stiff opposition.

Come along and get some fresh air after the excesses of the day before, and also to thank the lads for the best present to start the festivities!