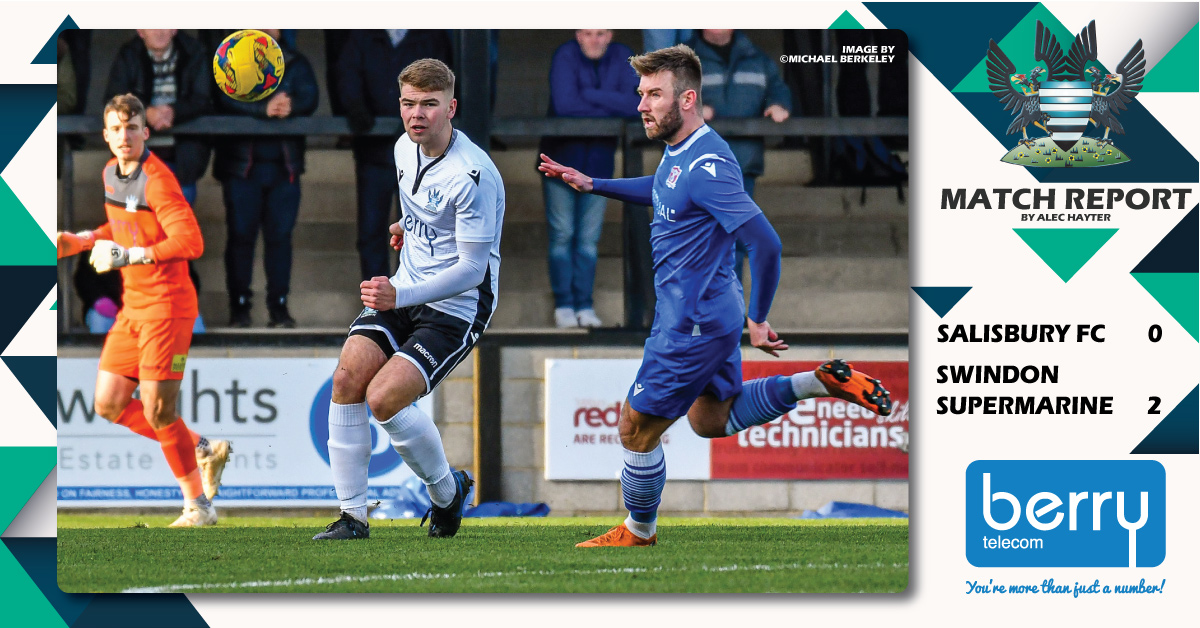 The Whites disappointed the majority of a large crowd as they slipped to their first home defeat in the league since 14 September against a Swindon Supermarine side who are in good form, and, on the day, organised and efficient without being outstanding. They didn’t need to be the latter as their task was made easier as some of the home side’s key players did not perform to their usual standard. In the end, Marine were helped to a deserved three points by some individual errors.

Steve Claridge said afterwards: “Things caught up with us today. We had not been playing too well, but were managing to get results. Having to play players out of position again showed.”

It was even-stevens for the first 45 minutes and although it was scoreless at the break, it could just as easily have been 2-2 as both sides had, and missed, reasonable chances. The first of these was a half chance which fell to Nathanial Oseni in the 9th minute when his attempt was cleared away from near their goal-line by the visitors’ defence.

Shortly afterwards, Marine had their best chance of the first half when a ricochet sent the ball obligingly to Harry Williams, who was one-on-one with Liam Armstrong. Armstrong did what every keeper should do, and spread himself well to deny the onrushing forward.

As with other recent games, the contest soon became end-to-end and at the Supermarine end Kevin Amankwaah back-headed Bay Downing’s long throw straight into the hands of keeper Martin Horsell.

On 26 minutes Armstrong’s clearance upfield became almost “route one” as Dan Fitchett wriggled past his defender but saw his right foot effort saved at the near post. Seconds later, Oseni was again in prime position from a Lewis Benson corner and connected well with a header but Lewis Spalding was in equally prime position to clear the ball away from the line.

On the half-hour mark Conor McDonagh was allowed to cut in from the right but could only hit a weak rising shot which Armstrong dealt with easily, but in a flowing move on 32 minutes the visitors could and perhaps should have gone ahead. A cross from striker Williams found Ryan Campbell at the far post but he could not direct his diving header, the ball going narrowly wide of the upright.

Seven minutes before the break Salisbury produced their best chance of the half when Owen Howe found himself in the clear but saw his firm drive shave the upright with Horsell beaten, but unfortunately on 40 minutes Howe’s weaker attempt from Shaquille Hippolyte-Patrick’s pass was never going to trouble Horsell.

Soon after the interval, Marine took the lead, and frontman Williams was given too much time on the edge of the box before turning and firing a low shot across Armstrong. Worse was to follow as on 55 minutes a breakaway saw the same player put in the clear before lofting the ball over Armstrong from some distance for a cool finish with the keeper in no-man’s-land.

Two goals to the good, Marine managed their lead well and although the Whites livened up they could make little impression on their opponents, and in fact just after the hour it took a superb save from Armstrong to keep out Campbell’s fierce cross-shot as again the Whites were nearly caught.

With 20 minutes remaining, Tom Leak was forced to clear off the line from Henry Spalding’s effort, but 8 minutes later, at the other end, the young defender nearly profited from Lewis Benson’s corner but could only send his header straight at keeper Horsell.

Supermarine are never an easy side to play and their current confident run of form saw them through with more than a little help from their hosts who now have to regroup for Tuesday’s game at home to Beaconsfield. Their opponents currently lie one place from the foot of the table, so on paper the match looks to be one of the easier tasks, but on the pitch, as always, it’s a different matter. It’s very important that the players move on from today’s reverse and grasp their opportunity on Tuesday, and with the prospect of a visit to basement boys Dorchester Town a few days later they have a further chance to make progress. In spite of today’s result Salisbury stay in 6th place in the league and have two games in hand over the top three, with one game in hand over the two teams directly above them. This result today does not therefore mean that all is lost, but at the same time, it doesn’t help!